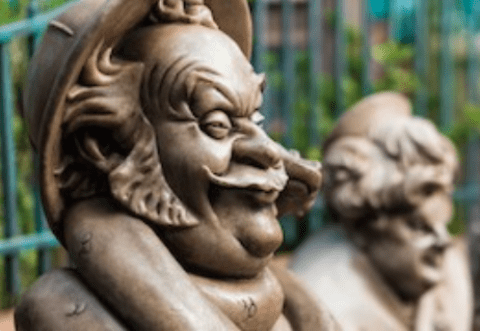 If you're planning to visit any of the top 10 theme parks in the United States (that is, any of Disney or Universal's), there's one reality you're definitely going to have to face: waiting.

The good news is, Disney and Universal have spent decades and decades studying the art of the queue, and have developed some tried-and-true methods for entertaining guests during the inevitable boredom of waiting. Highly themed queues has been part of their strategies since the '80s, spectacularly spreading the storytelling out to absorb guests from the start: touring through the haunted remains of the Hollywood Tower Hotel; slinking through the back alleys of Toontown en route to Roger Rabbit's Car Toon Spin; descending through security posts deep inside Gringotts...

While many Disney and Universal queues are themed, significantly fewer can truly be said to be interactive – that is, to offer things for guests to actually do. Especially in the 2010s, Disney made an intentional mission of retrofitting ride queues with "interactive" elements like embedded activities, props, and even video games. Arguably, that method has been left in the past in favor of smartphone experiences, immersive detail, and virtual queueing! But take a look at the ways these 10 attractions give guests something "to do." Which improve their respective waits? Which don't? 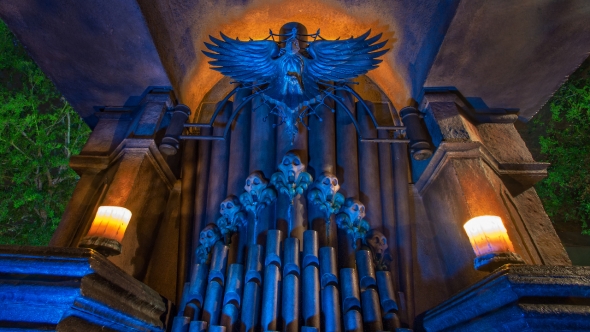 Location: Magic Kingdom
To do: Pay your respects... at a graveyard playground

Perhaps the most controversial queue on the list is that of the legendary Haunted Mansion at Magic Kingdom. The opening day attraction (based on the 1969 original at Disneyland) has always skillfully balanced fright and fun in an artful and timeless blend of the very different styles of two key Imagineers. And even though Haunted Mansion was the first major project without substantial direction from Walt himself, it’s been studied in-depth as a masterclass of Imagineering in its Golden Age. And that makes any change or adjustment to its “spirit” highly controversial…

As such, the new interactive queue added to the Mansion in 2011 was the subject of much condemnation from fans. It's easy to see why; the optional "graveyard" fork in the path leads to a courtyard of squirting tombstones, bubbles, and musical graves packed with “fan service” references. It's an odd aside for such a storied, historic, and somber attraction, turning the once-tense wait for the foyer doors to open into a giggling, splashing scene of sneeze sound effects and surprise props. Altogether, it’s a “cute but dumb” addition that doesn’t seem to enhance the attraction’s operations or story, even if it's a valiant effort to expand the Mansion's mythos and add a sense of (misplaced) whimsy. 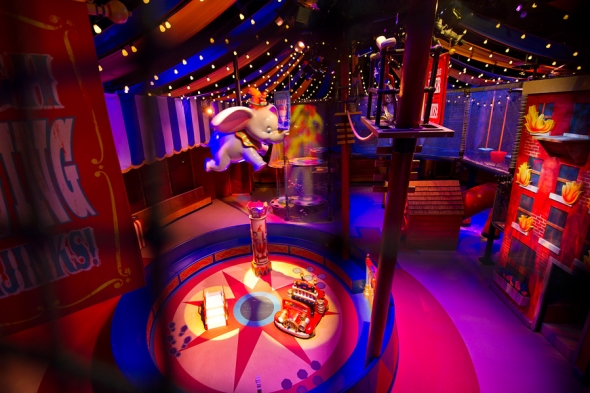 Location: Magic Kingdom
To do: Play!

A much-needed product of Magic Kingdom’s New Fantasyland was a new take on Dumbo the Flying Elephant. Given that the miniscule spinner is one of the most iconic rides at Walt Disney World, its painfully low capacity created lengthy waits and unhappy guests.

As part of New Fantasyland, Dumbo was doubled. Two new “dueling” spinners took their place in the vintage Storybook Circus mini-land, set in front of a circus big top tent. But the most unusual thing is what that tent contains… As part of a first-of-its-kind queue, guests take a buzzer (like you might have while waiting at a restaurant) and head into the big top, which contains a Dumbo-themed playground: climbing nets, towers, slides…! When the buzzer buzzes, it’s time to fly. And that’s a clever way to literally play-while-you-wait. 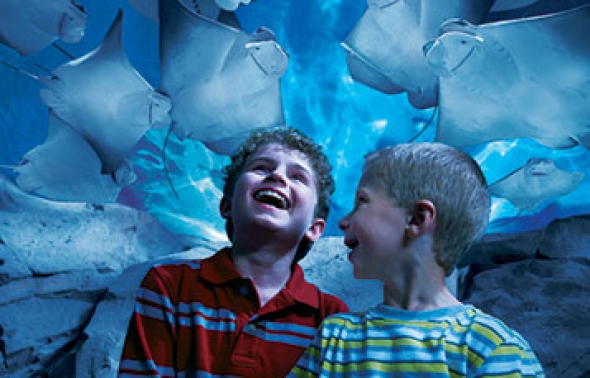 Location: SeaWorld Orlando
To do: Take in the beauty of real sea life

In a world before Blackfish, SeaWorld Orlando was on the rise as a real contender in Central Florida, looking to compete with the thrills of Universal. 2009’s Manta was a brilliant way to do it. The graceful, soaring, B&M flying roller coaster is meant to give guests the unimaginable experience of gliding effortlessly through the sea like a manta ray (but with more G-force), ending with an iconic wing-tip splashdown in the park’s entry pool.

Rather than a standard back-and-forth stanchion queue you might expect from a 140-foot-tall steel roller coaster, the ride’s queue doubles as the park’s manta ray aquarium. Passing through submerged, rocky caverns, waiting guests are literally surrounded in rays that glide around them, including a main tank with over 300 rays. It’s a brilliant way to turn one of the park’s starring thrill rides into a two-for-one deal. And of course, a secondary path through the aquarium allows guests to see the beauty of the rays without the 60 mile per hour coaster at the end.

7. Under the Sea: Journey of the Little Mermaid 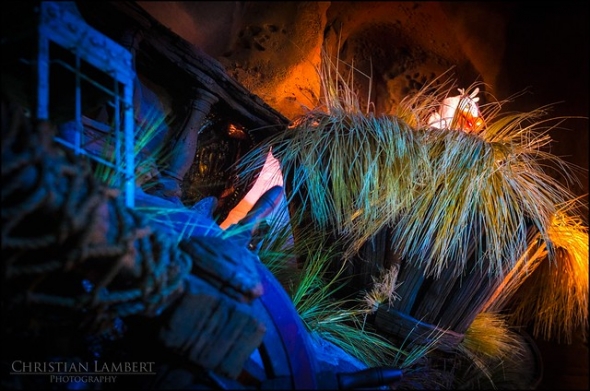 Location: Magic Kingdom
To do: Sort the treasures

Disney's first dark ride based on The Little Mermaid debuted at Disney California Adventure in 2011, where it's placed (appropriately!) in sandstone-and-teal 1910s-stylized aquarium gazing across Paradise Bay. The version earmarked for Magic Kingdom's Wizarding-World-influenced New Fantasyland would need reskinned, and the results are beautiful. Eric's seaside castle is is set back into a grassy hillside with eroded, sunset-hued rock and thundering waterfalls all around. Likewise, the ride's queue is a snaking pathway back through those windswept grottos, connecting to the interior of Eric's castle.

Along the way, guests pass by a treasure trove of shipwrecked remains, including three opportunities to play a game. In three windows, guests will find interactive scavenger hunts facilitated by little blue hermit crabs. Brought to life via the Pepper's ghost effect, the grabs bring out refuse they've found while sorting through the tempest-tossed human stuff. When they bring something that doesn't match, all you have to do is point at it and the crabs will take it away. It's a quick experience perfect for a fast-moving Omnimover queue, which makes us grateful that it was included at all when it could've easily been left out.

Altogether, the scavenger hunt is simple and skippable enough, but ends with a Magic Kingdom exclusive: an Audio-Animatronic of Scuttle interacting with the crabs. (And as you know, we love Animatronics in ride queues.) 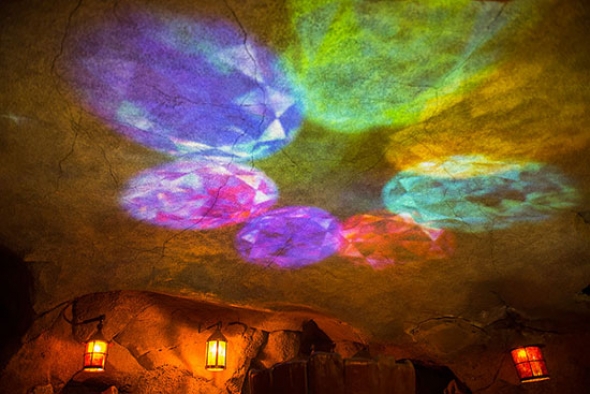 Location: Magic Kingdom
To do: Mining games and props

When the Seven Dwarfs Mine Train debuted in 2014 as the final phased opening of Magic Kingdom’s New Fantasyland, insiders knew to expect waits for the family coaster to balloon. What they might not have considered is that five years later, the ride still commands hour-long waits on even moderately busy days. Luckily, the ride’s queue was designed with games in mind.

The queue includes a water harp, where placing your hand beneath a carved woodland animal nozzle releases a glassy stream of water and an accompanying musical note. Further on, by spinning gem-filled barrels, guests can turn the swirling, crystal-like refraction patterns on the ceiling into images of the dwarves and (if all seven are spinning at once!) briefly make Snow White herself appear. A 15-foot interactive table allowed guests to drag-and-drop gems from a digital water trough, but was discontinued in 2018.