A Disney classic, The Haunted Mansion places guests in an old colonial manorhouse haunted by "999 happy haunts with room for a thousand." This frightfully funny family attraction features state-of-the-art affects, even forty years after its opening. 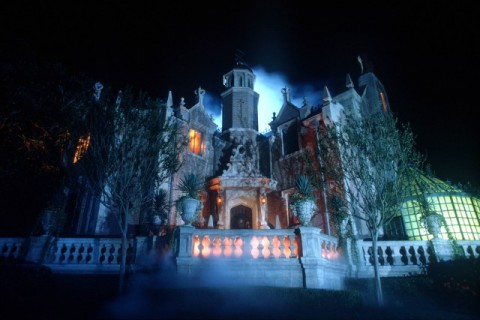 See all photos of Haunted Mansion

The Magic Kingdom theme park is home to many of the best rides in all of Walt Disney World. One of these best rides is located within one of the smallest areas of the park, Liberty Square. This particular attraction is "The Haunted Mansion", a home full of spooks and creeps done up in the enjoyable Disney fashion. As you enter Liberty Square you see the mansion sitting off the main path, looking as foreboding and appropriately creepy as can be.

As you wait outside for the doors to open up and allow you entry into the attraction, pay careful attention to the clever elements of the wait queue. For one thing, listen closely and you'll hear the sound of howling wolves. Look just beyond the fence and read some of the very humorous tombstones such as:

"Here Lies Cousin Dave...He Chased a Bear into a Cave."

And others....look too for the newest tombstone, one for Madame Leota which contains a real working face. The eyes open up and move from side to side every minute or two. Pretty spooky stuff if you're not aware it's there.

Once those doors open, however, prepare yourself for a creepy, kooky, and highly enjoyable attraction filled with great visual effects and a few chills and thrills. As you walk in, pay attention to the portrait on the wall to your left. It appears to be that of your "Ghost Host" during his living days, but keep watching....the picture shows you him in various stages of life and into death. It's a cool effect. When you walk in, you're herded into the study with seemingly no way out. On the wall above and around you are various portraits. When the "Ghost Host" begins to inform you of what you're about to encounter, the room seems to either be sinking or the roof seems to be stretching. HMMMM....which way is it? I'll let you determine that for yourself. In either case, as the room seemingly drops, the paintings are more revealed, showing the situation each character was in as the portrait was done. The "Ghost Host" will warn you that there's no way out of the room and that you can always take his way out...then the lights flicker out and if you look straight up, you'll see his rotting corpse still hanging from the rafters. Pretty gruesome...even for Disney.

After a minute or so, the far wall opens up and you and the other guests, each one with the potential of being the 1000th of the already 999 existing "happy haunts", are then brought to the main loading area for the ride. Here, you climb into your "doom buggy" for a ride through the rooms of the Haunted Mansion.

From this point on, the ride track twists and turns through various hallways and rooms each a little creepier than the other. There truly is a large abundance of details that add to the chilling effect. So many, in fact, that you may want to ride it several times to see what you didn't the last time around. Among items to pay attention to during your ride:

- The paintings with the "roving eyes".
- The creepy creature wallpaper.
- The dancing ghosts in the ballroom.
- The singing marble busts.
- The creepy bride in the attic.
- The ghost who hitches a ride with you.

Be careful though when bringing younger children onto this ride, it may just be a bit too much for them to take. You'll have to judge for yourself whether your child can handle the creepiness without nightmares or going all to pieces on you.

All in all, the Haunted Mansion is a lot of fun. The visual effects may be old, but they're still impressive and very effective. This is truly one of Disney World's best attractions, is highly enjoyable, and I recommend repeated visits.