Under the striped "big tops" of the Storybook Circus, two ornate sets of rotating, flying elephant-shaped vehicles welcome guests aboard. These rotate around a central column, with riders controlling the height of their elephant using a lever.

Photos of Dumbo the Flying Elephant 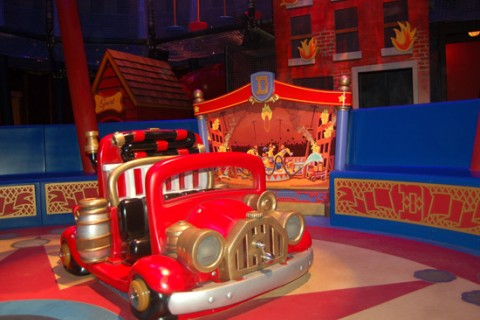 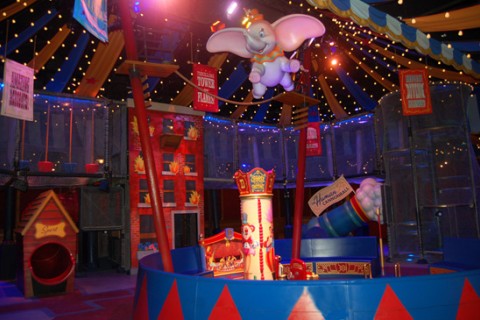 See all photos of Dumbo the Flying Elephant

Reviews of Dumbo the Flying Elephant

Dumbo - Only Worthwhile for the Little Ones

When it comes to the rides at Walt Disney World in Florida, it's interesting that in among their wide variety are the kinds that may bring a smile to your face without you even having to ride it. What do I mean by that?

While the rides in the Disney World parks can be enjoyed by all, there are clearly some designed specifically for the very young. These kinds of rides are usually made up in the same style: set in a wheel-n-spoke design, there is a center with many "arms" coming off of it with a ride car at the end of each arm. You climb in the car (in whatever design it may be), get buckled in, and the ride begins by slowing spinning the arms around, and you can control whether or not your little car stays low or climbs up a bit higher depending on how you pull back on the stick. Then it keeps spinning for a minute or so before slowing and coming down to rest so you can get off.

In Disney World, I can think of at least 3 of those EXACT same type of rides, 2 of which are even found in the same park, The Magic Kingdom. In the case of this review, we're going to talk about the old classic, Dumbo the Flying Elephant. Based off the 1941 animated classic, young ones (maybe even of all ages) get to soar with the flying elephant. In recent years, at the Magic Kingdom, the single ride (which typically had LONG wait times due to its enduring popularity) had been taken down and it was moved over to the Storybook Circus section of the park, and.......reopened with a dual-sided ride. This gives more people the opportunity to ride with a slightly lower wait time. The ride itself is the same, but there are slight changes in the appearance of it (most notably the bright colors that show with the fountain lights at night-time) and the theming of the queue has changed considerably. Once inside the big top tent and awaiting their time in line, there is a small play-place for the waiting children, and ticket themed-pagers are given to their guardians so the kiddies can play and then get notified when it's their turn on the ride.

But I did say that it could make you smile without even having to ride it, right? Well while it's not at all exciting, thrilling, or all that enjoyable for an adult.....you can still get enjoyment by watching the faces of the little ones going for a spin. Whether it's obviously their first time riding or one they've ridden quite a few times, you can see the fun they're having on it and sometimes that can just make the experience worthwhile (even if the ride itself is not).

Two Dumbos are better than one!

While "Dueling Dumbos" sounded a bit odd to me at first, I have to admit that the addition of a second Dumbo the Flying Elephant ride was done perfectly by Disney (not sure why I ever doubted that it would be.....).

What makes the new experience so much better is the "line but not a line" that you wait in before hand. Now you get a "ticket" to ride, and you wait until your ticket shows that you are ready before you go to get on the ride. This allows you to experience several interactive items under the big top that shrinks the feeling of your wait time, which is what Disney continues to perfect.