These Are the 10 Most Immersive Theme Park Lands On Earth... And What May Beat Them Soon... 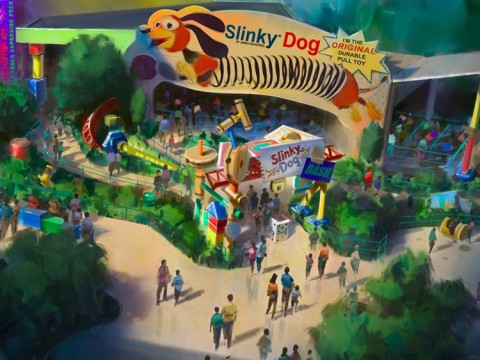 Since 1955, those words have been a sort of "thesis" of Disneyland and all major theme parks to come after. They exist to transport us to new worlds; different times; unexpected places. Over the decades since, the methods of transporting have changed from idealized, romanticized environments, to walking onto film sets, to stepping into movies themselves. And that got us thinking – which "lands" at Disney and Universal parks are the most successful at carrying us away?

Here, we've collected a countdown of the 10 most immersive theme park lands we know – lands that surround us and make us feel that we've truly become part of a new world. Take a look through our list (where we tried to represent each Disney or Universal park at least once) and let us know what you think. Which lands make you feel that you've entered a world of yesterday, tomorrow, or fantasy? And which do you think you'll find on our look at the least immersive lands, instead? 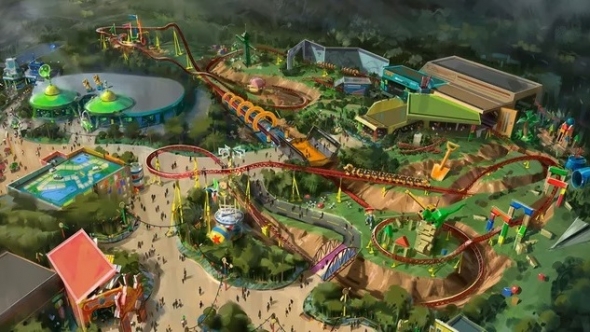 Toy Story Land wasn’t Disney’s first foray into “shrinking” guests and plopping them into a “backyard” littered with oversized things (in fact, Walt Disney World’s version is built mere steps away from where the “Honey, I Shrunk the Kids: Movie Set Adventure” once lived), but it’s certainly the new agreed-upon standard at Imagineering, even if each installation has a unique set of attractions. 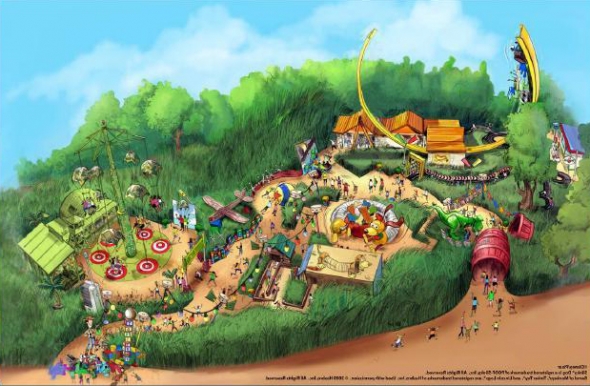 Interestingly, Toy Story Land is one of Disney’s most widely distributed lands; more than half of all Disney Resorts have one! But it’s not without its controversy. The land is widely considered to be a “cheap and cheerful” solution for quickly and inexpensively injecting new ride capacity into struggling parks, typically marked by two or three fairly standard carnival rides redressed to feature characters from the Toy Story franchise. Toy Story Land is immersive in the sense that it surrounds guests and absorbs them into a very particular world and scale… 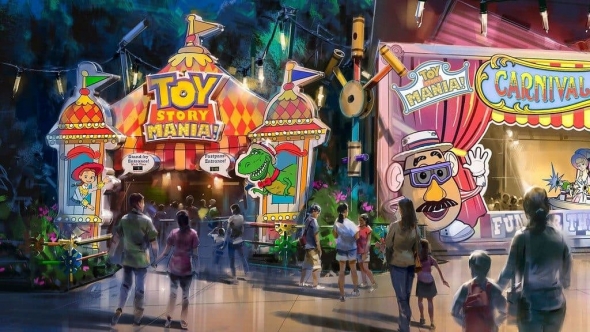 But even in its most impressive form at Walt Disney World (earned by way of re-appropriating the park’s Toy Story Mania into its ride lineup and featuring an actual roller coaster), there's still a disconnect for fans of Imagineering... 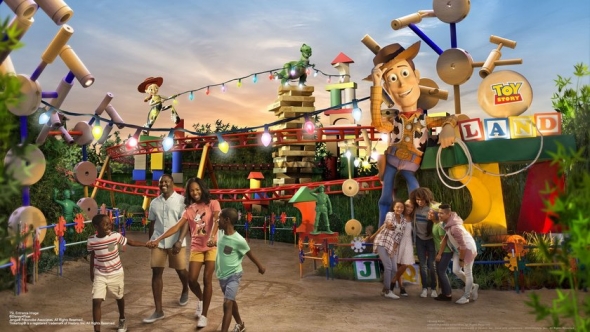 If the 21st century model of immersion is to pluck landscapes from the screen and allow guests to inhabit the recreated worlds they’ve seen there, Toy Story has some great options (like Andy’s bedroom or Sunnydale Daycare) where, theoretically, we would be the same size as Woody, Buzz and friends, and see them come alive. Walking around a backyard where static, unmoving Woody towers over us feels out of scale and doesn’t exactly bring the world of Toy Story to “life" so much as it shrinks guests to ant size and lets them wonder around a "backyard" of massive, static Toy Story characters.

But if Toy Story Land's true purpose is to add ride capacity, family attractions, and fairly inexpensive flat rides to the parks it inhabits, it largely succeeds. And even if eagle-eyed fans will note the wonky scale and inconsistent message, Toy Story Land is a fun enough concept connected to a hit Disney / Pixar film that few guests flinch at its underlying issues.

In the 2000s, Universal Orlando began an aggressive updating plan for its “Studio” theme parks in both Florida and California. Remnants of a bygone era of “behind the scenes” parks populated by beige showbuildings and mashed-together intellectual properties, parks like Universal Studios Florida and Hollywood were quickly looking like cheap cop-outs in an era ruled by Animal Kingdom and Islands of Adventure. Thinking quickly, Universal shuttered its Lost Legends: Kongfrontation and Jaws, replacing them with new, hot intellectual properties, nostalgia be damned.

But then came the closure of the ride that had literally created the park – the Lost Legend: Back to the Future – The Ride. The ride system was re-used (one of the first examples of a simulator being adaptable by way of a new ride film) to create The Simpsons Ride, based on the long-running Fox cartoon series. The courtyard in front of the ride became a mini Krustyland carnival of boardwalk games, but Universal's plans soon expanded. While The Simpsons Ride itself earned mixed reviews and hasn’t exactly become a new classic, it did inspire a creative change at the parks.

In 2013 – five years after the ride’s cartoonification – the space around The Simpsons Ride was transformed from the nondescript World Expo to Springfield, literally bringing the world of the Simpsons to life. Perhaps getting the core of the formula right better than Toy Story Land, Springfield is packed with the food and drink of The Simpsons TV series, as guests chow down on Krustyburgers, buy Lard Lad Donuts, and drink specially brewed Duff Beer and Flaming Moes.

When Magic Kingdom opened, its Fantasyland mirrored that of Disneyland’s: a sort of “Medieval Faire” courtyard of tournament tent awnings and pastel colors. Walt had never been pleased with the low-budget look of the land back in California, which led to the revitalization in the land in 1983, when the original dark rides and their tournament tent facades were reconfigured to create a sort of quaint, charming, European village that looked lived-in, possible, and real.

But even then, Magic Kingdom kept its faded pastel castle courtyard style… until Imagineers took a look at the massive parcel of land vacated by the Lost Legend: 20,000 Leagues Under the Sea and Mickey's Toontown Fair. In their place rose “New Fantasyland,” which, in that cinematic standard of the new millennium, brought to life the worlds of Beauty and the Beast, The Little Mermaid, Dumbo, and Snow White and the Seven Dwarfs in separate regions of a fairytale realm. 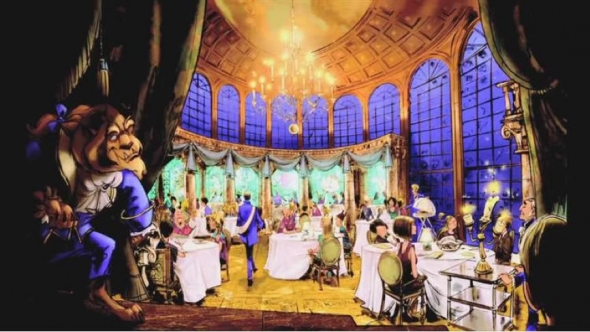 New Fantasyland mostly gets the formula right, allowing guests to step into the animated worlds they’ve seen on screen; they can dine in the Ballroom of the Beast’s Castle, drink in Gaston’s Tavern, shop in the market of Prince Eric’s village, and explore a timeless, enchanted storybook circus. While fans balked that the “biggest expansion in Magic Kingdom history” added a net one new ride (and saw the closure of the Lost Legend: Snow White’s Scary Adventures), the new, forested, immersive overlay at least brought a bulk of the land up to date.

Hello Brian, thanks for this great article! I quite agree with your list. Personally, I would add Main Street USA to it (the original Disneyland version and the Paris version). Even without the big attractions, I feel transported in time and place, so it works quite well.