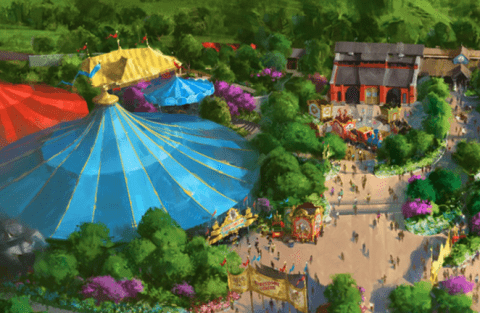 That’s the day that Mickey Mouse was born. After all, it was on that day that the curious cartoon mouse designed by Ub Iwerks and Walt Disney made his debut at the Colony Theater in New York City within the short Steamboat Willie – memorably, the first cartoon to feature a post-produced synchronized soundtrack. Steamboat Willie became the era’s most popular cartoon; it helped to create the art form of “animation” that Disney would become increasingly known for; it was a technological innovation that changed the animation industry forever.

But perhaps most importantly, it introduced the world to the playful, mischievous, trouble-making, string-tailed mouse bursting with rambunctious personality. From a corporate icon to reimagined modern cartoon star, generations of Disney fans have followed Mickey’s journeys… Yet for a generation of Walt Disney World guests, there was no better place to see “the Big Cheese” than Mickey’s Toontown Fair.

For many years, Theme Park Tourist has been assembling an entire LEGEND LIBRARY of in-depth features that tell the complete and surprising stories behind Lost Legends – closed classics and fan favorites from Disney and beyond. In this case, the first land ever added to Magic Kingdom was also the first to disappear. And today, we’ll step into Walt Disney World to explore the origin of this lost land… After all, our story doesn’t begin in Mickey’s Toontown Fair. It starts in another Mickey-themed land that briefly called Magic Kingdom home. But let's start at the beginning... 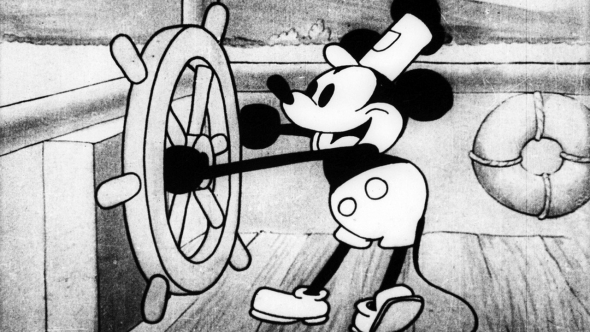 In 1928, Walt and his team had done the unthinkable: they’d made a cartoon speak.

Less than a decade later, 1937’s Snow White and the Seven Dwarfs would re-invent animation all over again. The world’s first full-length, animated feature film, most industry insiders and the public expected that Disney’s foray into feature films would be his last; that mere “cartoons” could never draw the attention of adults, and that children couldn’t sit through a full-length motion picture. It was widely expected that Snow White would crash and burn, decimating the Walt Disney Studios.

Of course, that wasn’t quite the case. Snow White is well remembered as the birth of animation as a modern art form and storytelling medium, kick-starting the Walt Disney Studios and financing their move to a new facility in Burbank, California. As the years passed, Pinocchio, Fantasia, Dumbo, Bambi and more proved the staying power of Disney’s storytelling in this emerging medium, and through it all, Walt consistently received letters requesting tours of the studio. 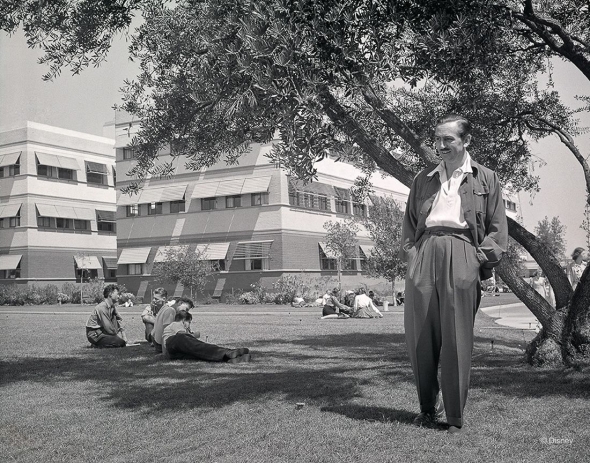 Young and old alike wrote into the Burbank facility not only requesting a behind-the-scenes look at the movie-making process, but for the chance to meet Disney’s characters, including Mickey Mouse.

While Walt could’ve opened the studio to Hollywood tourists and made extra money, he recognized that the process of animation – old men hunched over sheets of paper sketching with carbon pencils – wasn’t as glamorous or exciting as people hoped. 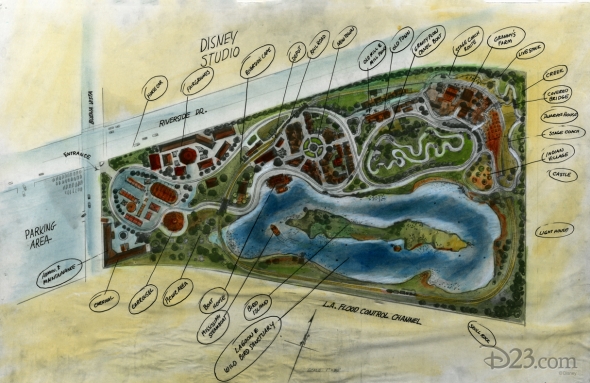 That’s when he developed the idea of what he called Mickey Mouse Park – a recreation and entertainment park to be built on a vacant lot next to the studio. There, he envisioned crafting environments that would transport guests to a Midwestern town; a frontier village; a quaint European garden. And there in Mickey Mouse Park, guests could finally come face-to-face with Mickey himself.

Of course, plans for this park expanded until they spilled over from the studio lot in Burbank, leading Walt to assemble a team to look elsewhere. Disneyland opened in 1955. And naturally, Mickey Mouse was on hand for the celebration (albeit, looking very different than he does today). 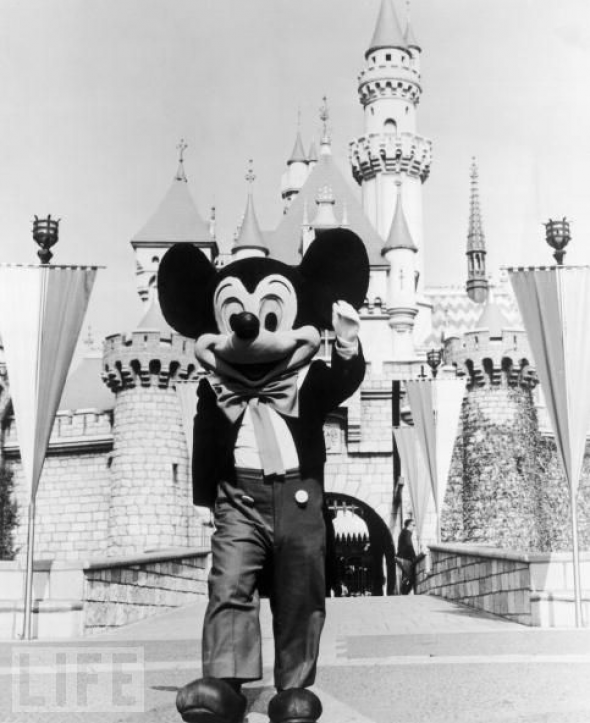 Meeting Mickey continued to be a focus of families at Disneyland, and when the brand new Walt Disney World opened in 1971, the Audio-Animatronic-packed Mickey Mouse Revue was among its opening day attractions! And as year after year passed, Mickey took on many different styles and personalities (both in the parks and beyond), all leading up to his grandest tribute yet…

If you give a mouse a birthday cake… 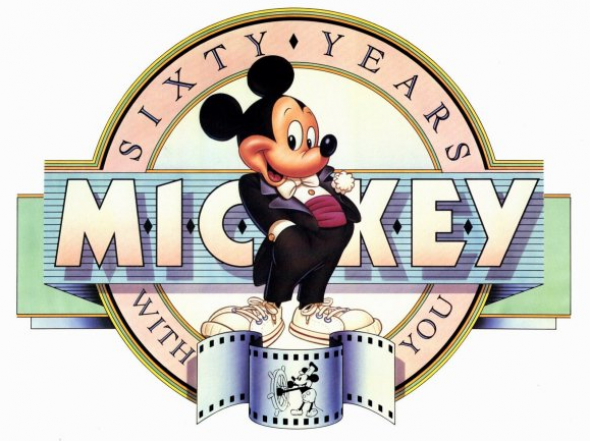 Disney knows how to celebrate.

From the Year of a Million Dreams to the Millennium Celebration, Disney’s parties are as legendary as the exclusive entertainment, guest giveaways, spectacular parades, and limited-time magic that tend to accompany them. From nightly-giveaways of palatial stays inside Cinderella Castle to Dream FastPasses, Disney cuts no corners when it comes to extravaganzas.

And yet, in 1988, their celebration of Mickey Mouse’s 60th birthday was accompanied by something of unprecedented scale: the opening of an entirely new themed land at Magic Kingdom. 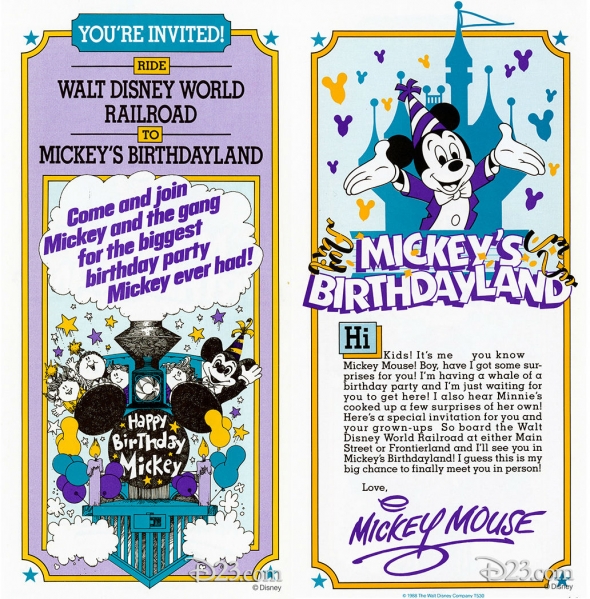 On June 18, 1988, Magic Kingdom opened its first new land since the park’s debut. To hear Minnie’s announcement across the park, Mickey’s Birthdayland was an unforgettable surprise party she’d set up for Mickey, and everyone was invited! While you could walk to the narrow 3-acre parcel between Fantasyland and Tomorrowland (cozied up against the park’s Lost Legend: 20,000 Leagues Under the Sea), Minnie naturally suggests that you stop by the Main Street Train Station, where she has a special train en route just for us! 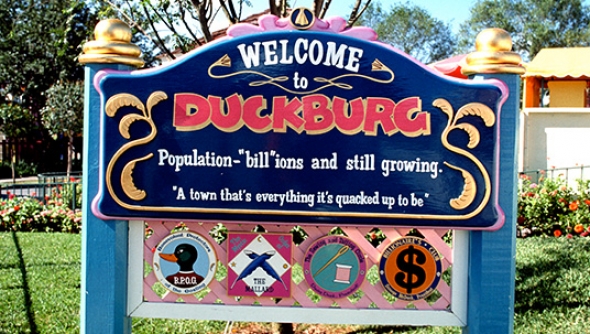 The Walt Disney World Railroad (temporarily renamed Mickey’s Birthdayland Express) became a musical journey circumnavigating Magic Kingdom with a new stop under the arched-tent train station along the park’s northeastern edge. Disembarking, guests would find themselves in Duckburg, U.S.A. (long-running home to Donald Duck and his waterfowl relatives) decorated for the biggest party in Mickey’s history.

Right in the center of town, Mickey’s House finally answered the age-old question of where exactly Mickey lives, providing guests would a whimsical walkthrough of his cartoon ranch, complete with parked car in the drive. Likewise, Mickey’s Birthdayland contained Duckburg’s Cornelius Coot Commons – a central park constructed around a bronze statue of the town’s mallard founder. 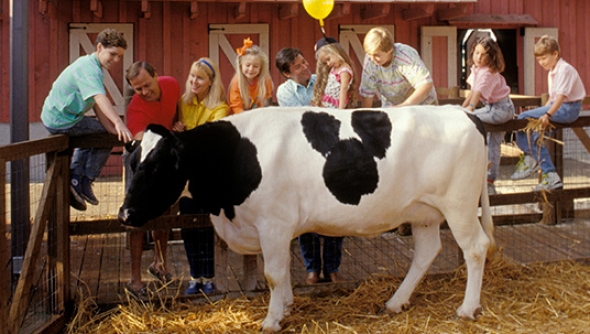 Another of Birthdayland’s memorable moments was at Grandma Duck’s Farm, famously home to “Minnie Moo,” a beloved dairy cow with a lucky marking.

Rising over the cartoon facades of Duckburg, though, are the land’s true monuments: four soaring, striped carnival tents housing Micky’s Birthday Surprise stage show and its exciting post-show featuring the characters dancing on a cake. 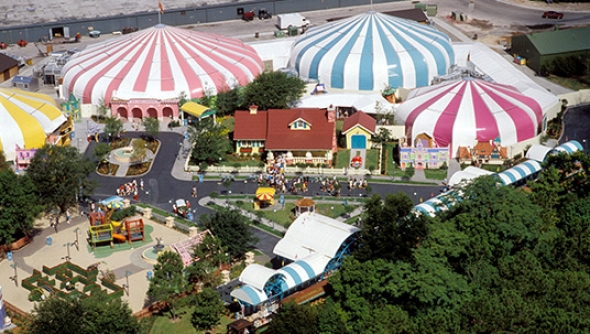 From the flat facades to the relatively simple circus tents, it would obvious to most guests that Mickey’s Birthdayland wasn’t meant to be a permanent addition to Magic Kingdom. Rather, it was meant to last the length of Mickey’s birthday celebration (which, in true Disney fashion, was about two years). However, just four days after the land opened, a new film that opened in theaters served as the first falling domino that would trigger Mickey’s Birthdayland to stick around… Any guesses? Read on…