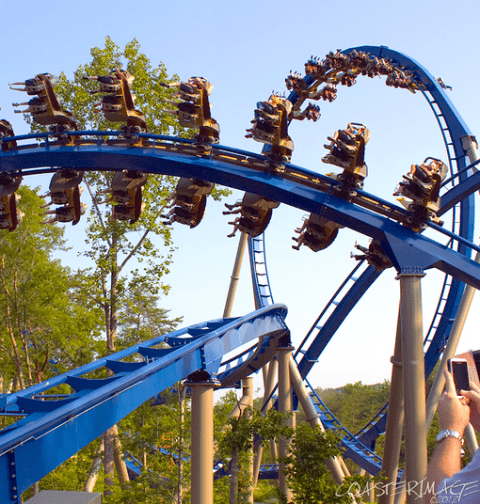 A little while ago, we shared a list of 12 Underdog Parks Stuck in Disney’s Shadow. Our intention was to highlight some of the lesser-known parks that simply get overlooked thanks to the massive budgets and advertising of Disney and Universal’s mega-resorts.

The response was enormous, with readers ecstatic to see their local parks featured where Disney and Universal tend to monopolize airtime. These "underdogs" get counted out, hidden in the shadow of Disney and Universal such that people assume they can never measure up. They're wrong, and more and more we recognize that these seasonal, regional parks have tons to offer in terms of entertainment, attractions, and theming.

So we’re following up our former list with one more. Like the first, this list is NOT exhaustive. There are countless incredible parks out there that deserve to be recognized and celebrated. If your local park doesn’t appear, it doesn’t mean it’s unworthy. Instead, our first list of 12 and the 12 more we’ve collected below are meant to be examples of the many wonderful amusement and theme parks that don't get a fair shake thanks to Disney's size and power. If you’re an adventurer (and we know most of you are), take out a note pad. You’ve now got at least 24 destinations to add to your bucket list!

For many years, Paramount’s Kings Island was the apple of Paramount Parks’ eye – a sort of breeding ground for unique rides that blended the thrills of a regional-destination amusement park with the movie studio’s unique theme and cinematic tie-ins. When Cedar Fair purchased the Paramount Parks chain in 2006 (allegedly because of the then-CEO’s adamant desire to own Kings Island specifically), the movie names were dropped in favor of more generic titles and the park seemed to briefly lack an identity or direction.

For example, the Italian Job: Stunt Track family coaster reverted to the Backlot Stunt Coaster. Even the world’s tallest gyro drop ride, Drop Zone: Stunt Tower was rebranded as the much less engaging Drop Tower. Most sadly, the park’s incomparable and mysterious enclosed dark ride, TOMB RAIDER: The Ride regressed to The Crypt, which couldn’t find a foothold in the park’s lineup without its outstanding, Disney-quality special effects and closed forever in 2012. 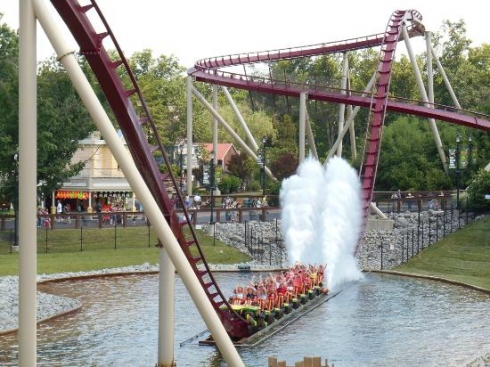 Via Susan M. on Trip Advisor. Click for source.

Signature Attractions: While Cedar Fair’s leadership saw a momentary shift away from theme in favor of outright thrill (more in the vein of the chain’s flagship Cedar Point), things have evened out as the park has grown. Now, Kings Island is supercharged with massive coasters, but retains its themed lands and family feel in a comfortable blend. The park’s stunning indoor Flight of Fear launched coaster retains incredible Universal-level theme and story. Cedar Fair’s towering additions Diamondback (a slithering, coiled 230-foot B&M hypercoaster, above) and Banshee (a shrieking B&M inverted coaster) both set the coaster world abuzz with anticipation, and both seemed to exceed expectations upon arrival in 2009 and 2014, respectively.

The legendary Beast made our list of the Top 15 Coasters on Earth, and for good reason – still the world’s longest wooden coaster 35 years later, it snakes through 35-forested acres hugging the ground throughout. (Its ill-fated sequel, Son of Beast, was much less prestigious during its short lifetime… it was world’s tallest, fastest, and only looping wooden coaster. In fact, both Son of Beast and TOMB RAIDER: The Ride made our list of the 11 Most Infamously Flubbed and Failed Attractions of All Time. Whoops!) 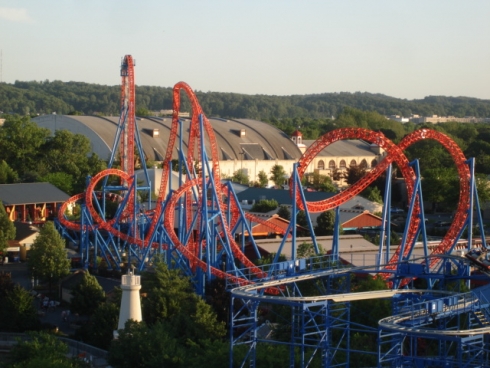 Whether you’re into chocolate or roller coasters, this is the place to be. Located in Hershey, Pennsylvania, Hersheypark is sort of like a jumbo-sized Kennywood – a distinctly family park maintaining many traditions and operations from decades ago. Inside is a pretty impressive collection of 12 coasters running the gamut from classic wooden masterpieces to exhilarating modern thrill machines.

Signature Attractions: Hershey’s Chocolate World is a giant, free-to-enter complex that’s actually outside of the park, but it contains an incredible dark ride called The Great American Chocolate Factory Tour. Inside the park, you can’t miss the classic Comet, a 1946 original. Above it towers the massive Skyrush, a 75-mile-per-hour, 85-degree drop Intamin coaster that soars and twists through the park’s ravines. Fahrenheit and Storm Runner are two of the park’s other great, sleek, steel coasters, each packing an unusual surprise punch. 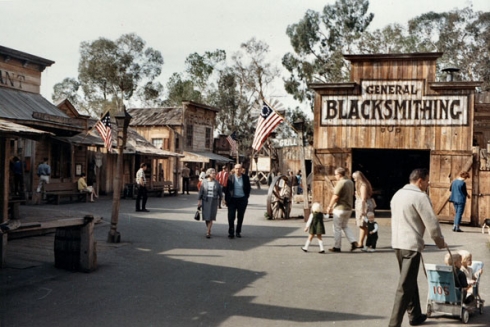 Aside from signature boysenberry punch, don’t expect too many berries from Knott’s. Billed as the world’s first theme park (appropriately, given its 1940 opening), Knott’s began its early days as a recreation pioneer town with a very famous chicken restaurant just outside. The park was lovingly operated by the Knott’s family until 1997 when it was purchased by Cedar Fair (owners of Cedar Point and Kings Island). From then on, thrills were the name of the game. Even still, Cedar Fair’s new CEO spent lots of time in Southern California (as president of Disneyland Resort) and has set out to revitalize the park’s dark rides, theming elements, and stories, letting coasters fall by the wayside for a bit. Today it boasts 10 coasters from mild to wild. The park is literally blocks from Disneyland Resort, and accessible for just a few dollars on the ART shuttle system based in Anaheim. 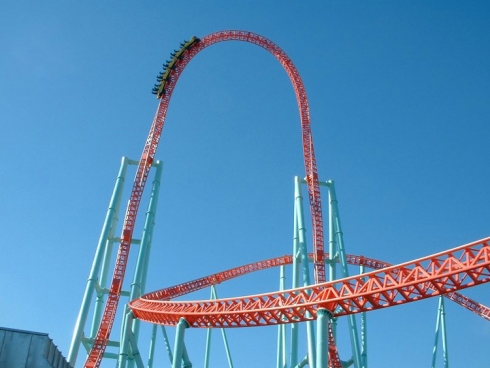 Signature Attractions: In terms of coasters, Xcelerator (above) and Silver Bullet score high for their impressive speed and height. However, it’s the park’s storied dark rides that have earned it so much attention lately. The Timber Mountain Log Ride (on record as inspiration for Disney’s Splash Mountain) and the Calico Mine Ride (likewise, but for Disney’s Frontierland rides) were given floor-to-ceiling refurbishments over the last few years, bringing every single scene new lighting, sound, and special effects while outfitting each attraction with massive audio-animatronics casts so impressive, they made our list of the Top 15 Animatronics in the World. You can also thank Knott's for being the first to feature horrifying Halloween events. It still reigns supreme with its annual Haunt. 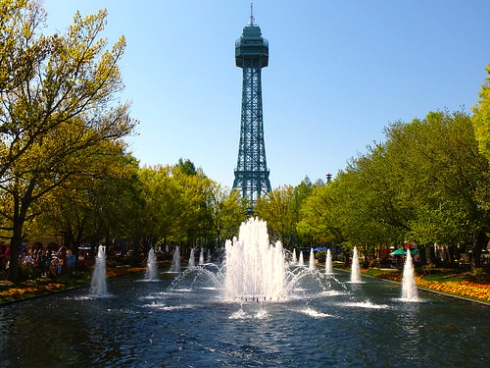 The younger sister of Kings Island, Kings Dominion was very heavily based on the original Ohio park when it opened. Through the years, the Kings parks have diverged, so aside from their lavish Royal Fountain entrances leading to one-third scale recreations of the Eiffel Tower, the two parks have little in common. Kings Dominion’s placement in the dense forests of Virginia gives it an automatic leg-up in the scenery department. While it’s impossible to name one park the outright winner in terms of attractions (apples and oranges, as they say), Kings Dominion does give its sister a run for its money. 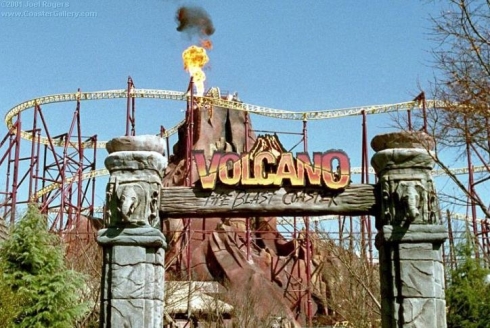 Signature Attractions: Paramount’s cinematic addition Volcano: The Blast Coaster reigns supreme in many enthusiast circles for its vertical launch upwards and through the flame-spewing mouth of a mountain. Just across the way in the same Congo-themed area, a dizzying carnival Top Spin was given the cinematic treatment with flames, water fountains, fog, and a synchronized soundtrack. Originally TOMB RAIDER: FireFall, that ride is now called The Crypt, just like Kings Island’s much larger, indoor, and more ill-fated version of the ride. The park made international headlines with the incredible Intimidator 305 in 2010, an ultra-intense giga-coaster (and the only sister ride to the world famous Millennium Force) that is truly one of the most forceful coaster experiences on the planet. 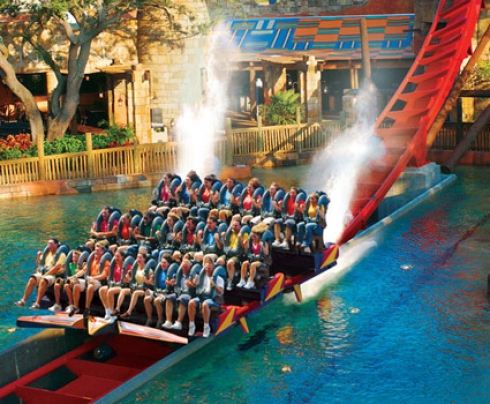 Our first list of 12 Underdog Parks featured Busch Gardens Williamsburg, the European-themed park in Virginia. Readers pointed out that we hadn’t featured the park that’s literally in Disney’s shadow! Busch Gardens in Tampa Bay, Florida is about an hour south of Walt Disney World and Universal Orlando (with free or dirt-cheap shuttles provided by the park, depending on your ticket package) and is themed to Africa. The park is overflowing with exotic animal exhibits and encounters set amid truly impressive themed areas based on Egypt, Stanleyville, the Congo, and Morocco. Like Busch Gardens Williamsburg, there’s a fair emphasis on entertainment, dining, and animal encounters, but the rides are all top notch. 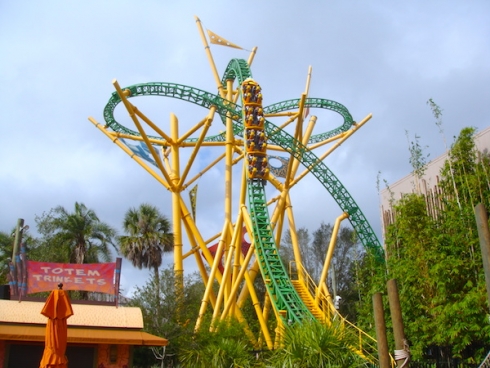 Signature Attractions: The park is perhaps most recognized as Florida’s most thrilling, with a line-up of incredible coasters, each with wonderful African-style names: Gwazi, Kumba, and Montu are all standouts. The blazing red track of SheiKra stands as one of the tallest and fastest Dive Machine coasters in the world, with a vertical drop, eight-abreast seating, a crumbling tower, and a magnificent splashdown in an ancient pool. Cheetah Hunt is a spectacular family coaster featuring three LSM launches that replicates a cheetah’s immense and dizzying speed, sprinting through canyons and leaping over the Serengeti. Though still in the testing phase, the unbelievable Falcon’s Fury will test the bravery of even seasoned park goers with its face-first freefall from 300 feet. 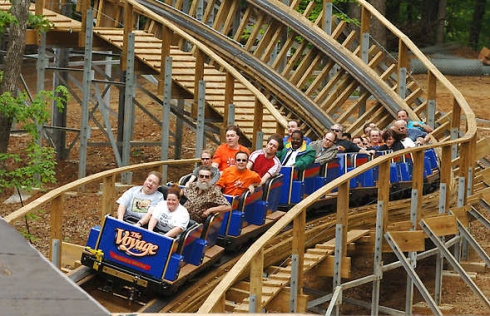 Holiday World seems to represent all the best of the theme park world. The park opened in 1946 (9 years before Disneyland) as Santa Claus Land before expanding to cover other holidays – today it features lands based on Christmas, Thanksgiving, Halloween, and the 4th of July. The massive Splashin’ Safari water park is as much a draw as the dry park, with awesome cutting edge water rides. The park has long been owned by the Koch family and wins annual awards for staff friendliness. Altogether, it’s just a nice place to be – free parking, free sunscreen, free inner tubes, and even free soft drinks. Yep. Unlimited, all day. Sounds like holiday, indeed.

Signature Attractions: The park is universally well known in enthusiast circles for its trifecta of wooden coasters: Raven, The Legend, and The Voyage, each more well loved and well respected than the one before. Few imagined that the park would ever fix what ain’t broke by entering into steel coaster terrain, but they’re poised to do just that… 2015 will see the opening of Thunderbird, a launched B&M Wing Rider coaster that looks set to be one of the year’s top attractions. Read our full preview of Thunderbird for more information.