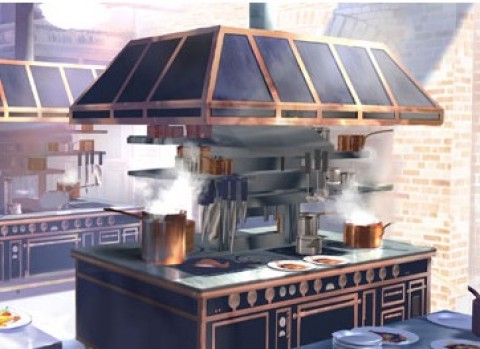 Why do they always forget about Walt Disney Studios, Paris?

Following the success of Disney California Adventure’s $1.1 billion renovation plus the addition of Toy Story Midway Mania and World of Color, Disney fans across the United States heralded the great return to quality at Disney Parks and have signaled the righting of so many wrongs as a sign that things had changed.

Indeed, if Disney’s most despised theme park could be reborn from the ashes as perhaps its most celebrated, beautiful, and well balanced, then the most egregious mistakes of the past had truly been undone!

Hastily constructed during Eisner’s “Disney Decade” when each resort (even the struggling European one) was required to build a new theme park, Walt Disney Studios opened with one major attraction and fewer acres than any other Disney Park before or since. A slow evolution has added a number of worthwhile attractions, but no real standout experiences to draw visitors to the miniscule park.

That will change in 2014 when we see the opening of a new dark ride based on Pixar’s critically acclaimed film Ratatouille. Given the park’s location just outside of Paris, it’s difficult to imagine how it took so long for the lovable rat Remy to make it to the French countryside (and in fact, design elements throughout the young park referenced Ratatouille from small hints to outright statues of the characters).

But following a €150 million loan from the Walt Disney Company in January 2012, it’s official. In 2014, a new corner of the much-maligned theme park will recreate the palatial courtyard outside of Gusteau’s bistro, complete with delicate French architecture and a bubbling central fountain that will mark the entrance to Ratatouille: Kitchen Calamity (in French, Ratatouille: Désastre en Cuisine).

Ratatouille will come to life as a dark ride, the storytelling format most commonly employed by Disney Parks in recreating classic tales from Peter Pan to the Little Mermaid. What remains to be seen is how exactly Remy’s world will come to life. Disney’s earliest dark rides generally feature simple, even static figures lit with backlight paint while a slow-moving cart travels through scenes. More recent evolutions of the style have used the continuously moving omnimover system (Phantom Manor, Buzz Lightyear Laser Blast, The Haunted Mansion, The Little Mermaid ~ Ariel’s Undersea Adventure) with more complex Audio Animatronics figures. 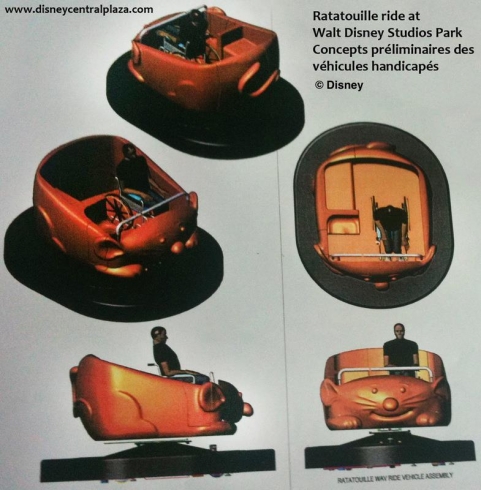 Leaked images of early vehicle renderings show what may be a trackless car attached to a motion base. Image © Disney.

Plans, though, apparently call for more advanced technology. Reports suggest that the ride will be a fusion of technology we've seen before, namely a roving, motion-simulating dark ride (The Amazing Adventures of Spider-Man, Transformers, Curse of DarKastle), a trackless GPS-guided vehicle (Tokyo Disneyland's's Pooh's Hunny Hunt) and 3D all-encompassing projection domes (SeaWorld Orlando's TurtleTrek, Harry Potter and the Forbidden Journey). These effects, perfectly synchronized, will doubtlessly shrink riders to Remy's size as he darts through the kitchens of Gusteau's Bistro causing mischief and mayhem!

Such impressive technology would also place Ratatouille: Kitchen Calamity among the most immersive and astounding technological dark rides in the world, capable of intricate motions and incredible 3D screen interactions. Until further details are revealed, we can only imagine the wild adventure that awaits. 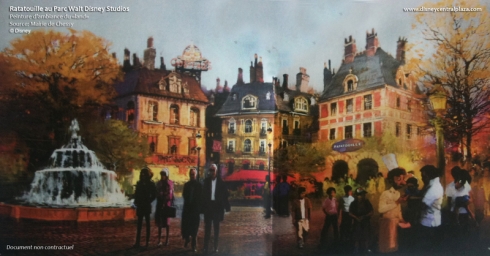 Ratatouille will doubtlessly be a massive step in the right direction for the troubled park. It does double-duty, really, adding a quality and detailed E-ticket experience to the property while also signaling the [hopefully] beginning of a thoughtful and necessary rebirth for the park.

Ratatouille will go far, for certain, but it won’t fix Walt Disney Studios. That’s because, like Disney California Adventure, the issues with the park go beyond the need for rides (though it does need them) or a lack of Disney characters (though it does lack them) or a past dependence on filler attractions that don’t meet guests’ expectations of Disney (though they haven’t met them). The park really needs an identity shift. It needs an aggressive expansion plan and a redefinition away from a studio backlot and toward a magical place set in a specific time and place.

Disney made the same mistake at Disney California Adventure’s Hollywood Pictures Backlot land, opting for the simpler and (frankly) cheaper back-story of a vaguely modern studio backlit rather than a quality 1930’s Golden Age of Hollywood styling. In California’s case, the land’s name has changed to Hollywood Land, though it still lacks the era-specific details that would complete that shift – the only part of the park that still needs significant redressing.

From what perspective will riders on Ratatouille see this kitchen? Image © Disney-Pixar.

In terms of that shift away from a “studio,” the area surrounding Ratatouille will be like a test patch of paint – an area that represents Paris authentically and without the kitsch of “movie magic,” in-jokes, lighting rigs, and visibly marked “soundstages” as easy-outs where real theming should be. It will be a legitimately quaint and beautiful corner of an inherently shallow park, and hopefully will represent the park’s direction in the future.

As it is, Ratatouille will at least boost the resort’s attendance and indicate that resort guests can and will accept the fledgling park so long as its shown the detail and investment expected of a Disney Park. Perhaps given time and encouragement, Walt Disney Studios will represent the kind of park that Walt would have been proud to have his name on. For now, Ratatouille will serve as a creative springboard, and a gauge of the future direction that the park will go in.

I wouldn't be too surprised if, depending on the success of the ride, we see a copy of it open in Epcot in place of the current attraction in France