Laser gun rides have surged in popularity at theme parks all over the world in recent years, and Buzz Lightyear Laser Blast is Disney’s take on the concept. The ride, located in the building that once housed the Visionarium 360-degree movie, sees guests joining the popular space ranger from the “Toy Story” movie as he battles the evil emperor Zurg.

Buzz Lightyear Laser Blast uses a similar Omnimover ride system to Phantom Manor (and dozens of other Disney attractions), and has a relatively high capacity due to its continuous loading cycle. Each guest is equipped with a laser gun, which is attached by a cord to the vehicle.

The aim of the game is to score as many points as possible by shooting targets that are located on the walls and, in some cases, attached to characters. Various different types of target are on offer, with some being worth more points than others (triangles deliver the biggest boost to your score, so keep your eyes peeled). Riders can even spin their vehicles using control sticks located on the vehicles’ dashboards.

Whereas many laser gun rides feature little or no plot, Buzz Lightyear Laser Blast sees riders attempting to stop Zurg from hoarding every power cell in the universe. In typical “Toy Story” fashion, the power cells are in the form of batteries that are used to power toys.

Upon reaching the end of the circuit, every rider receives a score and a ranking. This can range from Star Cadet (0 to 1,000 points) through to Galactic Hero (999,999 or more points). Realistically, a score of 300,000 or above is some achievement. 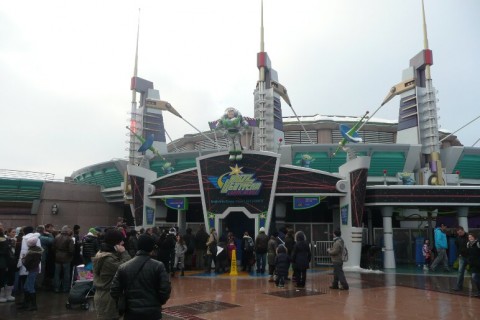 Great fun if you are into shooting dark rides. The queue line and theming in the ride is excellent as are the ride vehicles. The ability to spin your own car throughout the ride adds to the experience. We went on this with a 3 year old and he absolutely loved it so can recommend this for the whole family.