While it shares many elements with the Haunted Mansion rides at Disneyland and the Magic Kingdom, Phantom Manor features a significantly different external design and plot. This is partly due to the decision to locate it in Frontierland, where it stands slightly back from the edge of the Rivers of the Far West.

As with the Haunted Mansion attractions, the ride starts with guests gathering in an octagonal room, which houses a number of innocuous-looking paintings. Soon, though, the room begins to stretch – revealing a much more sinister side to the artwork.

Guests emerge into a short walk-through section, which houses a number of other darkly comedic images. They then board one of the ride’s “DoomBuggy” vehicles, which can hold up to 2 riders each. The attraction uses a version of Disney’s OmniMover ride system, which enables guests to board continuously.

Phantom Manor’s backstory is based around the tale of a bride who was left waiting indefinitely for her groom after he was lured into the attic of the Manor and hung by a mysterious phantom. The bride is seen on a number of occasions throughout the ride, along with a number of the phantom’s ghostly friends.

Several of Phantom Manor’s most recognisable scenes are based on those seen in the Haunted Mansion. The most famous of these is the ballroom scene, which uses the “Pepper’s Ghost” effect to create the illusion of a room full of dancing ghouls.

The ride’s end scenes are entirely unique to the Disneyland Paris attraction. They are set in Phantom Canyon, a supernatural version of the Thunder Mesa town that provides the setting for Frontierland. Finally, guests comes face-to-face with the phantom himself, before he hitches a ride on their DoomBuggies to the exit. 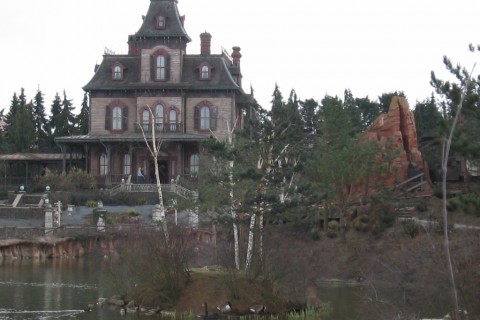 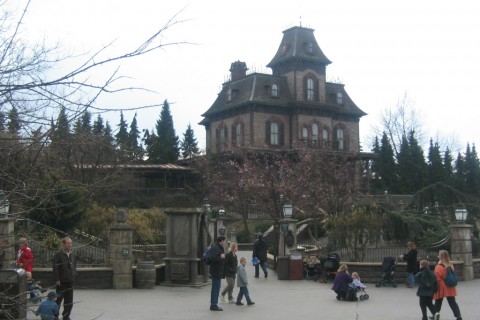 See all photos of Phantom Manor

Sorry, there are currently no reviews for Phantom Manor .