Place Your Bets! Will Star Wars: Galactic Starcruiser Be a Blockbuster or a Bust? Here's Our Guess... 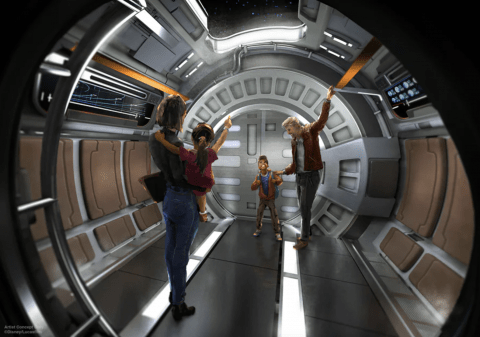 It was a full decade ago – and for a measly $4 billion – that The Walt Disney Company acquired one of the most pivotal, successful media franchises of all time: Star Wars. A massive pop culture coup, there was no doubt that Disney would reawaken the slumbering Star Wars saga across its media divisions. Most interestingly for fans of Disney Parks, though, Star Wars immediately lent itself to Imagineering projects...

Announced at the semi-annual D23 Expo in 2015, Star Wars: Galaxy's Edge was imagined by many as the height of Star Wars' integration into the Disney Parks, Experiences, and Products division. Bringing to life the invented planet of Batuu and its Black Spire village, there's no doubt that Galaxy's Edge was Disney's biggest entry into the era of "Living Lands" (cinematic, immersive lands plucked from media franchises, and where guests line up for restaurants and shops as much as rides, kicked off in 2010 by Universal's Wizarding World of Harry Potter). But unbeknownst to fans, there was more in the works...

At the next D23 Expo in 2017, then-Chairman Bob Chapek announced a pet project of his own: "a Star Wars-inspired experiential resort that will push interaction to a new level." Two years later, in 2019, he was on-hand once more to unveil the true extent of the new Star Wars: Galactic Starcruiser  (planned to launch in 2021)... the ultimate overlap of Disney's Parks, Experiences, and Products.

Once viewed as the kind of bold, experimental project that could propel Disney into the next era of themed entertainment, today, many fans are gleefully hoping to see Chapek's pet project crash and burn. As schadenfreude overtakes Disney and Star Wars fans, and as the Galactic Starcruiser readies to open in March 2022, it's time to lock in your answers, choose your side, and place your bets: will Star Wars: Galactic Starcruiser be a blockbuster, or a bust? If you were betting on the success of Disney's "one-percenter" next generation experience, would you bet for or against? Here's some information we've collected to help you out.

The Case for a Blockbuster

Disney maintains that Star Wars: Galactic Starcruiser will be "unlike anything that exists." After departing from an Earth terminal (conveniently located in Walt Disney World Resort), guests will travel via launch pod to a gigantic, intergalactic, luxury cruiseliner hovering in Earth's orbit. As is done so cleverly in Star Tours (where guests experience the mundane reality of interplanetary commercial travel even in the wild Star Wars universe), guests will become everyday citizens of the galaxy cruising aboard the "jewel of the Chandrila Star Line," the Halcyon.

Sure, guests aboard the Halcyon will sleep in compact, cruiseship-sized "cabins" with "windows" into space, but the Starcruiser is not a Star Wars hotel. Instead, it's a two-night, fully-immersive, totally-interactive, and entirely self-contained "cruise" where all aboard take part in a choose-your-own-adventure, live-action-role-play, immersive-theater experience. (Don't worry – if you forget your "in-universe" clothes, they'll be for sale on board.)

In keeping with the "cruise" model, guests will "remain fully in story" over their two-day, two-night experience, filling hours with Sabacc lessons, Lightsaber training, Droid racing, model ship building, eating and drinking in the ship's dining room and lounge, exploring the Halcyon's bridge and boiler rooms on mini-missions, and activating "spontaneous story moments" by interacting with the ship's crew of humans, aliens, and Droids.

Just as Earth cruises include stops of ports of call, the Starcruiser experience will include a "planetary excursion" to Batuu (that is, Star Wars: Galaxy's Edge at Disney's Hollywood Studios) via completely-enclosed shuttles that simulate an interstellar tender between the ship and planet. There, priority access to Star Wars: Rise of the Resistance, Millennium Falcon: Smugglers Run, and a Quick Service lunch at Docking Bay 7 (included!) will be recontextualized into the happenings aboard the Halcyon.

The truth is... that sounds cool. For Star Wars' most ardent fans, how could you not love the idea of literally living in a fully-explorable ship for two days? Even if you're not a die-hard devotee of Star Wars, it's easy to read about the Starcruiser and appreciate its commitment. Granted, we've argued that Disney's strict adherence to "immersion" actually weakens Galaxy's Edge at times, but hey, this is an almost-unbelievably scaled experience that should have the reverence and "reality" to match.

It's not hard to imagine the "Starcruiser" model expanding, not just with counterparts at Disneyland and Disneyland Paris, but beyond. Imagine a glass and steel Avengers Campus Recruitment Dorm with on-site training and unfettered access to the land. It could be that Disney has invented a new, franchisable medium of Experience! It's big! It's experimental! It's immersive! It's all the things fans are supposed to want!

...And yet, photos of what awaits on board having left high-rollers racing to cancel... Why? Read on...