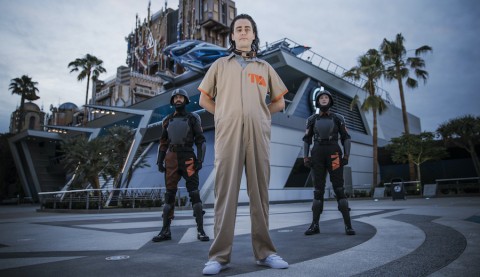 The multiverse has unfolded before us, and out has arisen AVENGERS CAMPUS – Imagineering’s newest entry in the ongoing “IP Wars” and the latest of Disney and Universal’s “Living Lands.” A training compound built to assemble and mobilize the next generation of heroes (that’s us), this superhero Silicon Valley wedged between California Adventure’s Cars Land and Hollywood Land is… well… surprisingly low-key. Some fans have been quick to note a relative lack of ambition in the land’s scale and attractions, especially compared to Imagineering’s recent Galaxy’s Edge...

… But make no mistake: Avengers Campus is a revolution if only in the way it rewrites the rules of “immersive” theme park attractions from here on out. For all the lore that underscores the Marvel Cinematic Universe it’s based on, Avengers Campus doesn’t care much about canon. It’s a storytelling playground; a sandbox in which Imagineers can at last have fun with the comic book heroes they acquired over a decade ago. Will the land’s lean into Marvel’s multiverse model see new timeline branches open up in Star Wars: Galaxy's Edge…? Should the Mandalorian and Grogu join Rey and Kylo Ren... even though they exist decades apart? Is Avengers Campus' "alternate reality" setting a smart idea? Let’s explore...

Be warned that, by necessity, light “spoilers” for the films and television shows of the Marvel Cinematic Universe – including Disney+’s LOKI Original Series – will follow!

For those returning from the Blip, here’s the background you may have missed. Disney purchased Marvel in 2009 for $4 billion – an absolutely gargantuan (and very surprising) acquisition for then-CEO Bob Iger’s Walt Disney Company, which had just come off the $7 billion buyout of Pixar. The landmark purchase equipped Disney with the young Marvel Cinematic Universe back when it was still one-off films featuring the cast-off heroes who hadn’t been popular enough for Marvel to license to movie studios in the ‘90s.

Nesting the relatively new Marvel Studios beneath the Walt Disney Studios banner, even Iger probably wouldn’t have imagined what a success the Marvel Cinematic Universe would become. Averaging just under a billion per film, the first 24 movies of the “MCU” catapulted Marvel into a pop culture juggernaut – currently, the eighth highest-grossing media franchise of all time.

Despite being one of the defining properties of a generation, though, Disney was very slow in incorporating its portfolio of heroes into its theme parks. That’s partly because of an infamous deal that ‘90s-Marvel struck with Universal, giving Disney’s biggest competitor the exclusive rights to many of its most popular heroes everywhere East of the Mississippi, period.

A slow and cautious drip of heroes mostly took the form of meet-and-greets and one-off rides in Hong Kong and California with promises that more would come… eventually. It wasn't until 2018 – 9 years after Disney's purchase of Marvel – that the company even acknowledged that "Avengers and other Super Heroes" would populate new themed areas in Paris, Anaheim, and Hong Kong one day.

Finally, Disney's toe-in-the-water rollout officially came to an end with Avengers Campus, a cannonball of an expansion serving as the eighth land and capstone of the second wave of reimaginings at Disney California Adventure in Anaheim. Though the land is small – less than half the size of the neighboring Cars Land – it has a lot of ground to cover to incorporate the best of Marvel’s high-earning heroes.

The land is wrapped in a world-building frame story of a repurposed Stark Motors manufacturing facility that’s become a sleek and stylish San Jose-style campus. The remains of redbrick factories have been overtaken by contemporary glass and steel, serving as laboratories for scientists and tech geniuses experimenting with new tech for would-be heroes. If the whole thing feels a little haphazardly assembled, that's probably because it was. (Reportedly, a failed plan to expand Disney California Adventure northward saw Imagineers scuttle their existing Marvel plans and rearrange in the tiny property that had been "a bug's land.")

Essentially made of a single, central plaza, the land manages to contain the W.E.B. research lab (offering an Open House tour of its W.E.B. Slinger technology), a Pym Labs test kitchen, an “Ancient Sanctum” left quarantined since Stark’s day, the shining Avengers Headquarters, and the intrusive (and for the record, still out-of-place) fortress of The Collector, which has evidently cosmically appeared within the facility.

The land officially opened on June 4, 2021 (11 months after scheduled thanks to the COVID-19 pandemic and the 14-month closure of Disneyland’s theme parks)... and some guests were surprised not by what – but who – they found there…

… Which is enough to cause Avengers aficionados to do a double take. Because if you’re caught up on your MCU films, you know that half of those heroes… well… shouldn’t be there. In case you managed to miss the highest-grossing film of all time, Avengers: Endgame served as a nexus event for the MCU, forever reshaping the series’ canon. By the film’s conclusion, a handful of beloved heroes were gone; others passed their mantles onto a new generation; those that remained were forever changed by Thanos’ “snap” that instantaneously “dusted” half of humanity and the Infinity War fought to bring them back.

Suffice it to say that Iron Man shouldn’t be walking around Avengers Campus acting like it’s any regular ole’ day unless Avengers Campus is set before Endgame on the MCU timeline. Of course, it can’t be… Because from Sam Wilson’s Captain America to the TVA’s Loki, Avengers Campus has also hosted post-Endgame characters… who curiously co-exist with, for example, Black Widow as she appears in her standalone film, set after Civil War.

So when on the MCU timeline is the Avengers Campus set? Easy. It’s not. In comic speak, it’s an “alternate universe;” a sort of narrative spur that officially is set in a reality that’s like the Marvel Cinematic Universe, except (according to Disney Live Entertainment director, Dan Fields):

There’s no snap. What I mean by that is we want there to be some conflict, but we don’t want anyone to feel that there’s an apocalyptic threat to the end of humanity. Our friends in the studio do a great job with that. So we want the conflict to be a little more accessible to the daily guests here.

In other words, Avengers Campus isn’t on the MCU timeline at all. Our visit to Avengers Campus occurs in a narrative spur; a branching timeline known as the Marvel Theme Park Universe (the “MTPU,” comprehensively explored on the Imagine Tomorrow podcast). As such, when we visit Avengers Campus as recruits, our role is to sling some webs, try oversized food, and buy Spider-Bots!

We’re here to test out tech demos; to witness the mystic arts; to spot Spider-Man flying high over the land; to join in a Dora Milaje training session; to have fun. Scuffles may break out between heroes and villains on rooftops occasionally, but “the end of the world” should be the last thing on our minds.

And that’s very good news, because it means that Avengers Campus can be a one-stop-shop for the Marvel characters we love… and (most importantly to Disney) a flexible space where up-and-coming heroes can always be on display… What does it mean, and how could it change the way Disney’s other immersive lands operate? Read on...