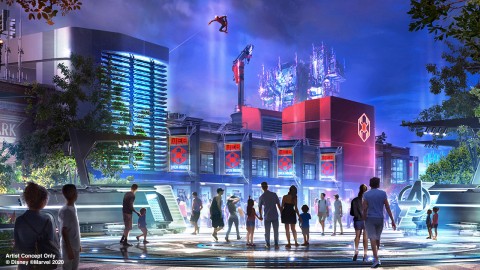 Just how big is the Marvel Cinematic Universe? To put it in terms Disney executives would understand: the first twenty-four films of the franchise have earned $23 billion in box office receipts alone… yes, an average of nearly one billion dollars each. Though the MCU is only halfway to earning the total haul of the Star Wars franchise (in a quarter the time, mind you), the MCU shows no sign whatsoever of slowing down. Disney’s MCU has become one of the dominating pop culture IPs of the 21st century.

Given that, you’d probably expect that Disney’s gone big and worked fast to incorporate its hot, blockbuster catalogue of heroic characters into Disney Parks; that Marvel has been granted at least the kind of permanence, scale, and scope as Star Wars.

The truth is a little less heroic. Disney’s been really slow to add Marvel characters into its theme parks. Part of that is no doubt thanks to the uneasy legal arrangement Disney inherited in Florida, which precludes the company from using many of its highest-earning heroes in its flagship resort. Even as their blockbuster films came and went, most heroes were relegated to meet-and-greets in California, Hong Kong, and Shanghai. Then, the plan started to become clear… And now, Avengers Campus is here…

The first permanent Marvel attractions only came online in 2017. Hong Kong Disneyland’s Iron Man Experience was a much-needed E-Ticket addition to the park’s Tomorrowland, using the tried-and-true technology that powers Star Tours elsewhere. The very same month, Disney California Adventure’s Lost Legend: The Twilight Zone Tower of Terror closed for a quick-change into Guardians of the Galaxy - Mission: BREAKOUT!. Disney promised at the time that both rides would become anchors of ret-conned Marvel-themed lands… eventually.

At least in California, it’s believed that plans for Marvel were initially huge. They reportedly revolved around a seemingly separate project (Disneyland’s 2016 “Eastern Gateway” proposal) that would’ve rearranged the resort’s east-side infrastructure, relocated its bus loops, and freed up an unheard-of four-acre expansion pad adjacent to Disney California Adventure’s Hollywood Land. It makes sense that Disney put their eggs in that basket, assuming that Hollywood Land and the four-acre add-on could be combined into a massive Marvel land.

But in October 2017 – mere months after Mission: BREAKOUT! opened – the Eastern Gateway project was canceled. That meant that any hopes of using the expanded space to have heroes overtake Hollywood was canned, too. Now, Disney California Adventure had a single superhero-themed ride, alone and adrift in a thematically vacant No Man’s Land between Hollywood Land and “a bug’s land.” But Disney’s biggest franchise had been promised a place in the park… and if heroes couldn’t overtake Hollywood, they’d have to settle for Heimlich.

Here’s what you need to know: Avengers Campus looks like what it is: a sort of “piecemeal” solution to Disneyland’s hero issue. Overtaking “a bug’s land,” the new area still manages to absorb the existing Guardians of the Galaxy ride, even if not tremendously artfully. It also manages to squeeze a lot into the relatively small parcel of land. (Including the two-acre Guardians ride, Avengers Campus now totals six acres – less than half the size of Galaxy’s Edge.) Here’s what you’ll see (and what you won’t) in the newest immersive Disney Parks land:

YOU’LL FIND ONE NEW RIDE. Ironically placed in the former "It's Tough to be a Bug" theater, WEB SLINGERS: A Spider-Man Adventure uses the same basic premise as Toy Story Midway Mania with the caveat that riders use hand gestures rather than carnival poppers. Yes, it’s a little odd to so obviously re-use the ride system just a few hundred feet from where it debuted on Pixar Pier, but Web Slingers is simultaneously a much-needed boost to the park’s list of headlining rides and a much-needed, height-restriction-free family attraction for Disney California Adventure – especially since it cost the entirety of A Bug’s Land.

On board, riders join Spider-Man in a trip through the Worldwide Engineering Brigade (WEB) to test out the cutting-edge WEB Slinger vehicle. Of course, when Peter Parker’s helpful Spider-Bot gets caught in replication mode, guests have to “swing” into action, webbing up the run-amok robots throughout the facility. Like Smugglers Run in Galaxy’s Edge, it’s a technological E-Ticket in its own right, but is clearly meant to play second fiddle to something bigger… More on that in a moment. Until then, rest assured that Web Slingers is solidly the second best Spider-Man ride on Earth, which isn’t worth complaining about.

THERE’S PLENTY TO BUY. It’s no accident that Disney’s theme parks and merchandising divisions were recently combined on the company’s organizational chart. Like Galaxy’s Edge, fans have been quick to criticize Avengers Campus for being “pay-to-play.” It’s probably a fair criticism.

While the Avengers may not have a must-have equivalent to the Wizarding World’s wands, Disney stocked the land’s WEB Supplier gift shop with plenty of add-ons. Granted, the “in-universe merchandise” bar is set pretty low given that the land is rooted in our world, so everything from Spider-Man goggles and web-shooters to plain ole’ action figures, mugs, baseball hats, and hero costumes is on the menu.

The land’s equivalent of Star Wars’ Droids are Spider-Bots which (of course) can be customized with add-on “tactical upgrades,” which theoretically matter in somewhat-lethargic robo-battles you can join in mini-arenas set up around the land.

The most controversial merch, however, must be the WEB Power Band accessory that links to the Web Slinger ride vehicle and upgrades or transforms the wearer’s digital webs. Theoretically, it’s the first Disney ride that can be “plussed”... for a price. The base WEB Power Band costs $35, with each unique hero add-on setting you back another $30. Is it worth $65 to shoot Iron Man's repulsor beams rather than webs? Fans will quickly decide...

THE FOOD IS INSTAGRAMMABLE. Again despite the “Wizarding World” formula being the go-to for designers, the MCU just… doesn’t have a lot of food. That theoretically leaves the land without a “must-have” equivalent to Butterbeer… but worry not! In addition to the Pingo Doce soda (briefly featured in The Incredible Hulk) which has Baja-Blast-virality potential and a Shawarma Palace food cart (referencing a post-credits scene from The Avengers), Imagineers found a way to make eating an essential part of the land.

The Pym Test Kitchen is Avengers Campus’ Three Broomsticks. Leaning into Marvel mythology, it’s a “food lab” where Pym Technologies scientists are experimenting with the same particles that shrink and grow Ant-Man. Mini-pretzels on an overhead conveyor belt pass above diners and into a Quantum tunnel, emerging as purchasable giant soft pretzels. And so it goes for the rest of the highly-Instagrammable menu, which includes a bowl of pasta served in a giant spoon with a single, massive meatball and a $100 submarine sandwich that can be shared by several families. The land’s signature food item is a $16 oversized fried chicken patty made to look all the larger by being squashed between two slider buns. It’s anyone’s guess how the menu will be tweaked and altered as its novelty wears off, but until then, it’s amazing that Disney managed to make food matter in a superhero land.

YOU WON’T FIND THE AVENGERS E-TICKET. When Avengers Campus was announced in 2019, then-Parks-Chairman Bob Chapek showed two versions of the same piece of concept art: a “before” and “after” of the Avengers HQ building, with the latter adding a massive white showbuilding emblazoned with the iconic Avengers “A.” That, in theory, is the land’s true anchor attraction. Built of unprecedented scale and a never-before-used ride system, the ride would no doubt stand alongside Rise of the Resistance as a next-generation “U-Ticket” experience.

Problem is, the land won’t open with it. And given the perilous position of Disney Parks post-COVID, the jury’s still out on if it’ll arrive at all. Currently, rumors suggest that the legendary “Avengers E-Ticket” is, at best, five years from arrival. To be clear, the land has two very solid rides already, but Disney’s explicit promise that a no-holds-barred headlining attraction will come – eventually – is a little worrisome. Is it any surprise fans are having flashbacks to those first few months of Galaxy's Edge when Rise of the Resistance was AWOL and rumors of the land's "failure" became mainstream news?

What do you think of Avengers Campus? Is Disney California Adventure’s newest land what you hoped? Is it a fitting embodiment of one of the highest grossing intellectual properties of all time? Has Disney convinced you that heroes belong in California? Will its dining and shopping go on your must-try list, or is the land's focus on retail and food a little too much for you? And what do you think will happen to the Avengers E-Ticket project?

As I've been a little out of the loop on the California parks, I appreciate this update and overview of the Marvel stuff in DCA! Thanks for the excellent reporting as usual, Brian!