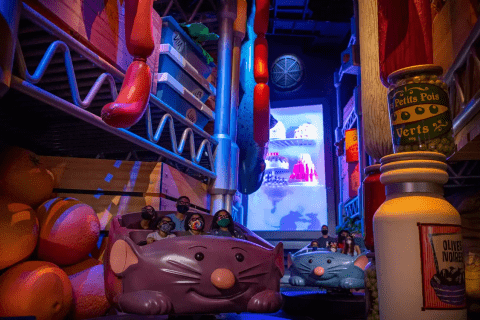 It's the end of another year – and a year unlike any other. A year ago today, we were stepping out of 2020 – a year defined by closures, cancellations, and cost-cutting that included Disney's vow to axe $900 million in capital projects from its Parks, Experience, and Products division going forward. We lived through a year when construction stalled, projects slowed, tourism slammed to a halt, the rules of operations were rewritten, and it was entirely unclear what the future could hold for Disney and Universal Parks...

Now, standing at the start of 2022 and looking back on the ups and downs of 2021, there's no doubt that industry-wide, we've just made it through 365 days of playing "catch-up"... Many of the rides that debuted in 2021 were initially planned for 2020, and likewise, many of 2021's planned attractions will instead open in 2022! So today, let's look back on 2021 with a time capsule review of the big attractions of the year... and what the rides that missed their expected 2021 openings altogether...

It's hard to believe that theme parks have been an active battleground in the "IP Wars" for over a decade (tracing back, of course, to the 2010 opening of the Wizarding World of Harry Potter.) Subsequent "immersive lands" themed to Cars, Avatar, The Simpsons, Harry Potter, The Avengers, and Star Wars might've left fans asking, "What's left?" Were there really any unclaimed intellectual properties still out there? (The answer: of course! In fact, we made a list...) Universal's partnership with Nintendo is the coup few saw coming, and fittingly, the first project was Universal Studios Japan's Super Nintendo World.

Planned to open in time for the 2020 Summer Olympics in Tokyo, Super Nintendo World was delayed until 2021... but of course, so were the Olympics. Ultimately, the land opened at a time when Japan's borders were closed to foreigners and capacity in the park was strictly limited. But that didn't stop images of the blockbuster new area from quickly spreading across the globe. A living, multi-level Mushroom Kingdom plucked straight from Super Mario Bros., Super Nintendo World is perhaps the coolest "immersive land" yet. (Yes, the image above is a photo, not concept art!)

Japan's version features two rides. Yoshi's Adventure is something of an outdoor dark ride, with a chain of slow-moving Yoshis passing through the brilliant, kinetic environment and animated scenes. The headliner is Mario Kart: Koopa's Challenge, an interactive dark ride that uses augmented reality (AR) goggles to add chaos and gameplay to impressive physical and projection-based sets and animatronics. While it's not the high-speed, TEST TRACK-style racing ride some hoped, it's still a great attraction... and one headed to the U.S. But we'll discuss that on the next pages...

2. Secret Life of Pets: Off the Leash

Scheduled to open March 27, 2020, let's just say that Secret Life of Pets: Off the Leash... well... didn't. It's wild to imagine that this family dark ride (based on the Illumination animated film series The Secret Life of Pets) was literally all set and ready for guests when Universal Studios Hollywood was shuttered at the start of the COVID-19 pandemic. When the park opened over a year later, the first guests finally stepped aboard.

Secret Life of Pets: Off the Leash is a sensational dark ride, using the same Omnimover-style, continuous chain of slow-moving vehicles as Yoshi's Adventure. Fans had long been hinted that after the disappointing one-two punch of Race Through New York and Fast & Furious: Supercharged, Universal had gotten the memo and sworn off screen-based rides and simulators for a while. Yoshi's Adventure, Mario Kart, and then Secret Life of Pets proved that to the be true.

After a spectacular queue through New York City apartments (which, by itself, has more Audio-Animatronics than Pandora, Avengers Campus, and Galaxy's Edge combined), guests step aboard and "become" strays who find themselves loose the city. Animatronics, built-out scenes, and adorable effects make the ride a surprisingly wonderful addition that Universal Creative should be very proud of.

With six ultra-classic dark rides, Disneyland's Fantasyland is a paradise for Disney Parks history fans. Dating back to the park's 1955 opening, Snow White's Scary Adventures jostled a generation of visitors with its cackling Evil Queen, dark dungeons, and haggard old witch. Even when the ride was rebuilt in 1983 (as part of a land-wide redesign), Snow White's attraction ended not with a "Happily Ever After," but with guests apparently witnessing the Witch's death just before crushing them beneath a boulder.

In November 2019, Disney announced that Snow White's Scary Adventures would close for a refurbishment in the 2020 New Year. But as part of an influx of new effects, lighting, sound, and detail, the ride would also shift its focus from the grim and gray Wicked Witch to the more joyful and colorful moments of Snow White's story. The ride closed January 7, 2020. The multi-month redesign was likely well in progress when Disneyland closed in March.

In December 2020, Imagineers resumed work and followed up with the ride's new name – Snow White's Enchanted Wish – even though Disney's Californian parks hadn't gotten the green-light to re-open and weren't sure when they would.

Ultimately, Snow White's Enchanted Wish was ready when Disneyland finally re-opened nearly fourteen months after its closure, on April 27, 2021. We reviewed the updated ride shortly after its opening, and though it's easy to roll your eyes at the idea of downplaying the "scariness" of a classic, the truth is that Snow White's Enchanted Wish is a wonderful new evolution of Snow White's dark ride (and yes, it still includes scary moments!) that feels like an obvious upgrade in just about every way.

But the big names of 2021 mostly landed beginning in the summer... Read on as we explore the three "headliners" of Disney and Universal's 2021 roster...