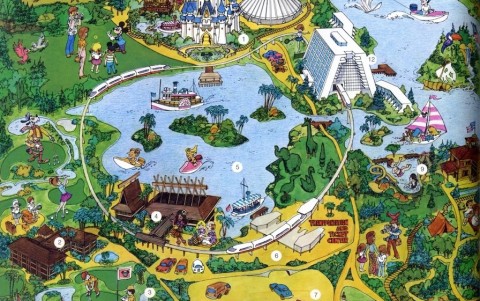 In case you haven't heard, Walt Disney World is officially fifty. Okay, chances are that you'd need to live under a rock to miss news of "The Most Magical Celebration on Earth," and if you're even slightly tuned into Disney Parks news, you probably know that it's not quite living up to its name. From cancelled perks and new upcharges to "copy-paste" nighttime same-taculars; a focus on animation over attractions to seemingly forgetting to celebrate Walt Disney World history during their celebration of Walt Disney World history, Disney hasn't done a great job reminding us what makes Walt Disney World so special.

But we're here to help! Here at Theme Park Tourist, we took at look at how many rides in Disney World are Opening Day Originals, dating back to Magic Kingdom's debut on October 1, 1971. We also have a full collection of in-depth histories of Disney Parks classics like Snow White's Scary Adventures, Alien Encounter, Mr. Toad's Wild Ride, the Skyway, and other beloved, lost attractions from Magic Kingdom's past...

But Magic Kingdom isn't all that opened at Walt Disney World in 1971! Today, we'll look outside the theme park's gates to see where you can find other 50-year-old icons of Walt Disney World history worth celebrating! While our seven icons of '71 is far from an exhaustive list, take a minute to be grateful for these other Opening Year classics next time you visit the "Most Magical Place on Earth."

Even in 1971, Walt Disney World quickly differentiated itself from its older, Californian sister with one heck of an opening act. The Seven Seas Lagoon is 167 acres – large enough to fit both Disneyland and its parking lot (now California Adventure) with room to spare. Narratively, it serves as a dramatic entry experience for guests, separating Magic Kingdom from its parking lot. The approach to the park and its towering Cinderella Castle are made all the more romantic by the waterway.

But the Seven Seas Lagoon has a few important operational functions, too. The 14-foot deep body of water serves as a necessary water management resource for the resort, serving as a counterbalance to water displaced during the construction of the park, its parking lot, and the rest of the original Disney World property.

Of course, the land excavated for the Seven Seas Lagoon didn't go to waste; it was used to bury the "Utilidors" that famously serve as the true ground-level structure that Magic Kingdom is built on top of.

The Seven Seas Lagoon was also an attraction in its own right, especially in the early days of the "Vacation Kingdom of the World." You have to remember that back in the '70s, Disney's single theme park in Florida was certainly the anchor of Disney World, but not the complete experience. Back then, sailing, boating, water-skiing, swimming, hiking, and relaxing were as much a part of the "Vacation Kingdom" experience as Magic Kingdom. That leisure resort atmosphere can still be spotted in bits and pieces, centered on the Lagoon, including...

Famously meant to be the companion hotel to the park's Tomorrowland, the Contemporary Resort Hotel opened on October 1, 1971 – the same day at Magic Kingdom and the rest of Walt Disney World. The iconic A-frame structure of the sleek, white, stylish hotel designed by Welton Becket and the United States Steel Corporation was indeed contemporary at the time, though today, it looks like a monumental, modernist ode to the futurism of the '70s (luckily for Disney, a style that's returning to favor and futurism, as evidenced by Tomorrowland's gradual walk back towards it).

Given its iconic architecture and its powerful association with Disney World, it's fair to say that the Contemporary is probably among the most famous hotels in the country, and maybe the planet. It's also the subject of countless urban legends, rumors, and Disney lore. One famous story holds that the hotel's modular rooms were manufactured and assembled off-site, trucked to the property, and slid into the A-frame structure like drawers in a dresser. Of course, that story is famous because it's true. The second half of the story, though – that the rooms can just be just as easily removed for refurbishment – is decidedly less true.

(Another wild-but-true story: The Contemporary Hotel is where then-U.S. President Richard Nixon delivered his "I am not a crook" speech while attending an Associated Press convention held there, just a short walk from his Hall of Presidents doppelgänger. He resigned less than a year later.)

In 2021 – just in time for the resort's 50th Anniversary – the Contemporary Hotel underwent a facelift. As with all adjustments to historic Disney Parks features, the hotel's reimagining wasn't without its critics. For the most part, though, its half-century makeover did two things very well: first, it leaned into mid-century modern furniture, colors, textures, patterns, and styles, leaning into the hotel's retro-cool '70s aesthetic (even if that did happen in guest rooms by way of Disney-Pixar's The Incredibles).

Second, it did precisely what we wish the rest of Disney World's 50th did: it used Disney World and the Contemporary Hotel itself as an intellectual property worth celebrating! From the Steakhouse 71 eatery, to walls decorated with Mary Blair's Grand Canyon mural patterns, to framed concept art of the hotel in the lobby, it all comes together to feel like a celebration of the resort itself, with plenty of allusions to its most iconic element...

The Walt Disney World Monorail sails effortlessly through the Contemporary Hotel's Grand Canyon Concourse. And of course, that single-railed "Highway in the Sky" is an icon in its own right, and one celebrating 50 years as well.

Disneyland's Monorail opened in 1959 as the first daily operating Monorail in the Western hemisphere. However, it opened as one of three "E-Ticket" rides that debuted in the park's Tomorrowland on the same day (alongside the Submarine Voyage and the Matterhorn Bobsleds). In other words, Disneyland's Monorail was "just" a ride... a living, functioning prototype for what Walt imagined as a revolutionary mass transit system of the future. (The Monorail is still primarily a ride at Disneyland, though it was expanded to connect with the Disneyland Hotel – today, Downtown Disney – in 1961, making it a true transportation system.)

A Monorail was meant to serve as the backbone of "The Florida Project" from the start, when Walt envisioned an aerial highway of sleek, modern trains traveling from the airport to his E.P.C.O.T. city, then on to Orlando's "Disneyland East." The Walt Disney World that opened in 1971 was very different from the one Walt had envisioned, but a Monorail still served as its backbone. Concentric Express and Resort lines circumnavigate the Seven Seas Lagoon and connect the Transportation and Ticket Center, the Contemporary, Magic Kingdom, and the Polynesian Village.

The Monorail System gained a third line in 1982 when a new route was constructed to EPCOT Center – built far from the Seven Seas Lagoon had once served as the resort's core. Since then, no additional lines have been built. Instead, Disney relied for decades on busses to shuffle guests around the San Francisco-sized property. The newer Skyliner offers modular construction that undoubtedly costs a fraction of what new Monorail lines would.

Still, it's sad to see Disney's iconic system slowly age, with pretty continuous coverage of system stops, degrading infrastructure, and embarrassing malfunctions. The current Mark VI trains were built in 1989 – closer to 1971 than 2021. (Disneyland, meanwhile, got new trains in 2009.) Ironically, Monorails became so closely associated with Disney's theme parks and "attractions," they arguably haven't been taken very seriously as standalone, urban transit solutions. But even if Walt Disney World's is in need of investment, it's still an icon of the resort 50 years later.

It'll also take us to another 1971 original that's not celebrated nearly enough...