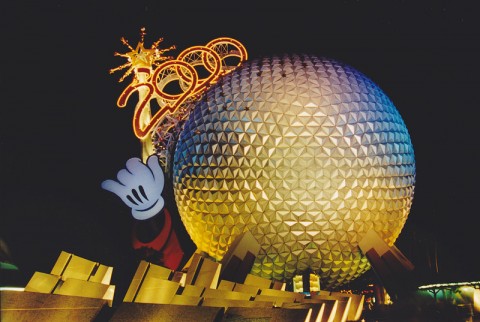 The 2000’s were, admittedly, a weird time for Disney fans…

We continue our journey throughout the decades at Walt Disney World with one of the most challenging eras to pin down in the park’s history. The 80’s saw the resort expand from one park to three, and the 90’s were marked by explosive growth and ingenuity. It would seem like a no-brainer that the 2000’s must have been even more amazing.

The turn of the millennium was certainly an exciting time—after all, the Y2K bug didn’t break the world, and that called for celebration. You couldn’t go a day without finding something new bearing the label of “Millennium Edition!” or “2000!” (and I’m not just talking about Windows). The internet was now a household staple, making the way for social media to become integrated into everyday life.

On the other hand, the decade started off on a challenging foot with the tragic September 11th terrorist attacks in 2001. People were genuinely nervous to travel, and the country shifted into a series of economic recessions that would bookend the decade. As for Disney parks, the 2000’s marked a challenging season of transitions.

After the death of Frank Wells in 1994 and a subsequent series of health problems for CEO Michael Eisner, Disney entered a time of stringent belt-tightening, halting many new projects while attempting others on the cheap. Episode 4 of the Disney+ series, The Imagineering Story, describes this time as an era of “Hit or Miss”—the company had a few wins like the Disney Cruise Line and Tokyo DisneySea, but the trio of Hong Kong Disneyland, Disney’s California Adventure, and Walt Disney Studios Park all suffered from terrible openings.

Both Imagineers and fans were frustrated, and it seemed like company overlords kept making one bizarre decision after another, like planting a giant sorcerer’s hat smack in front of the Chinese Theater in Disney-MGM Studios… or planting a giant wand on Spaceship Earth… or transforming Countdown to Extinction into the tamer Dinosaur… or having Stitch toilet paper Cinderella Castle.

It was a strange time.

Here’s the thing though—while adults may have found the 2000’s frustrating, there was one demographic who still had plenty of wins during this time: kids. Despite the challenges of the tail end of the Eisner era (Bob Iger stepped in as CEO in 2005), the 2000’s marked a turning point where Disney started finding new ways to draw in kids. Some great attractions and truly bold ideas came out of this era, and it’s why many 2000’s kids remember the time with nothing but fondness.

What were the bright spots of the 2000’s at Walt Disney World that kids loved? Here’s a few…

It’s sort of impossible to look at Walt Disney World in the early 2000’s without including some of the amazing things Disney pulled out of Mickey’s sorcerer hat at the end of the 90’s. There are so many of these that they really had more of an effect after the turn of the millennium than the 90’s overall.

For one thing, Disney had some pretty great attraction openings outside of the parks. A few of these were small but appreciated additions like Fantasia Gardens mini-golf and The Boardwalk. Probably the most significant, though, was the arrival of Disney Quest in 1998. We’ve talked about Disney Quest extensively before, but the place was revolutionary when it arrived at Downtown Disney. Disney had been quietly testing interactive, VR-based attractions for years, but Disney Quest took the concept to new heights with five levels of cutting-edge gaming experiences that put creative power in guest’s hands. For 2000’s kids, it was an arcade like no other.

The end of the 90’s was also when Disney introduced two great mainstays of the Disney experience enjoy today: Fastpasses and Pin Trading! Paper Fastpasses first arrived at Disney parks in 1999, and they completely changed how savvy guests toured attractions—a system where you didn’t have to wait in line? It was unprecedented, and it was free (unlike VIP tours). Despite the system’s foibles, it was a quick winner with 2000’s kids who unanimously hated lines.

Pin Trading was another last-minute arrival in 1999, debuting as part Disney’s 15-month Millennium Celebration. The program was such a hit that it quickly started showing up in Disney’s other international parks, and it has remained a guest favorite ever since—especially among kids! Speaking of which…

Disney’s Millennium Celebration was pretty cool. Echoes of it showed up all over Walt Disney World (especially in cool “2000” merch), but the majority of the festivities took place at Epcot.

Along with Pin Trading, the Millennium Celebration brought the addition of the Leave a Legacy stones to the Epcot entry plaza and crowning Spaceship Earth with a giant “2000” over a Mickey wand. The park got its first parade, the Tapestry of Nations, and Illuminations was given its last major makeover as Illuminations 2000: Reflections of Earth (this version would remain until 2019, sans the “2000” moniker).

One of the neatest features of the celebration was the Millennium Village, an Innoventions-like pavilion in between Canada and the UK that gave guests the opportunity to learn about countries not previously represented at Walt Disney World. The eclectic choices included Brazil, Scotland, Eritrea, Chile, Israel, Sweden, and Saudi Arabia. Every country had interactive elements, some of which were pretty neat like an Eritrean coffee ceremony, Scottish mini-golf, and a rainforest experience. Other countries were represented through crafts and music like Lebanon, Venezuela, Greece, South Korea, Peru, Egypt, and Thailand.

We’re still waiting on that 12th World Showcase pavilion, but Millennium Village gave kids a nice preview of what could be some day! 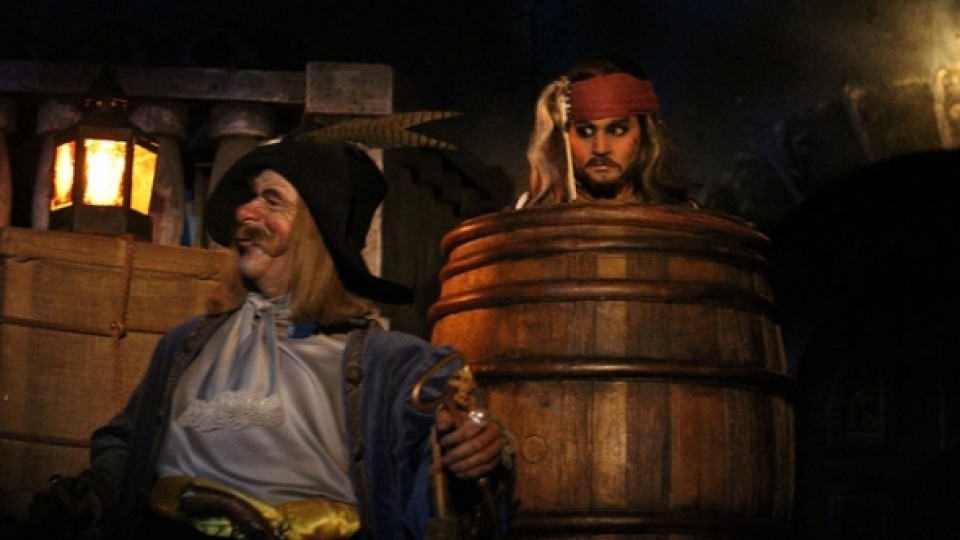 The 2000’s proved a quieter time for Magic Kingdom. 2003 saw the arrival of Wishes to replace the Fantasy in the Sky fireworks, and Mickey’s Philharmagic arrived as a surefire winner for families. You would think the arrival of Stitch’s Great Escape (as a replacement for the Eeh-Gad-It’s-right-behind-me ExtraTERRORestrial Alien Encounter) in 2004 would have gone over great with young visitors, but small kids found it too scary while others just found it gross and disturbing.

One of the biggest hits with 2000’s kids at Magic Kingdom during this time, however, actually proved to be one of the most controversial changes for adults.

Pirates of the Caribbean has probably gone through more ride refurbishments than any other classic attraction, and none of these caused bigger waves than the arrival of Captain Jack Sparrow. Nobody expected Pirates of the Caribbean: Curse of the Black Pearl to be a successful film (not even many Disney executives!), let alone to kick off an iconic film series. Kids and adults alike fell in love with this new take on the classic ride.

A hallmark of Bob Iger’s arrival as Disney’s CEO was an added emphasis on introducing intellectual properties into the parks in new ways. A mere three years after the film arrived, Pirates of the Caribbean went down for a major refurbishment that saw the attraction changed forever from its classic form—the film inspired by the ride ended up becoming the new inspiration for the ride.

The changes included adjustments to the ride soundtrack, the adding of the “fog wall” featuring Davy Jones, adding Barbossa to the battle scene, and of course, the addition of Jack Sparrow throughout the ride. We’ve poked fun at the Jack animatronic before (excuse me… Captain Jack Sparrow™), but there’s no doubt the addition of Jack Sparrow both to the ride and parks as a greetable character proved a total win with 2000’s kids, one we still see the echoes of today.

4. Soarin’ above and below

The 2000’s proved surprisingly significant for Epcot with the arrival of three of the park’s most beloved attractions.

The first of these was Mission: Space in 2003—a polarizing attraction. Guests who loved it applauded the ride’s astonishing realism in depicting zero gravity (I recall being almost brought to tears of awe the first time I experienced it). The ride’s detractors found it both too claustrophobic in design and intense in regards to motion sickness. The ride subjected guests to even more g-forces when it opened and quickly had to be dialed back. Eventually, in 2006, the “Green Team” version was added, eliminating the spinning factor. Despite this controversy, 2000’s kids who met the height requirements LOVED Mission: Space—what kid wouldn’t want to blast into space, after all?

Epcot scored another win in 2005 when Soarin’ made its way to Epcot as a duplicate of “Soarin’ Over California” from Disney’s California Adventure, creating a huge family draw for Future World and The Land pavilion. This was followed two years later with the renovation of The Living Seas into The Seas with Nemo and Friends. The introduction of Pixar IP’s may have been controversial for fans of the original attraction, but the change elevated the attraction into one of the top draws for kids in the entire park. Little ones especially loved Turtle Talk with Crush, one of Disney’s first uses of a familiar digital character that could interact with guests as if he were completely real. The gimmick still captivates kids to this day!

I really like dinsey park please come back i Know it’s tuff time I don,t see a theme park in olrando fl

I had the trash can talk to me as soon as i came out of the bathrooms. he yelled, "That man didnt wash his hand!" I said, "yes i did!" (this is as the people around start laughing) He asks me, "Then what color was the soap?" I'm glad i rememebered! Lol. I told him "Green!" He said, "False alarm everyone! He did wash his hands!" LOL it was great