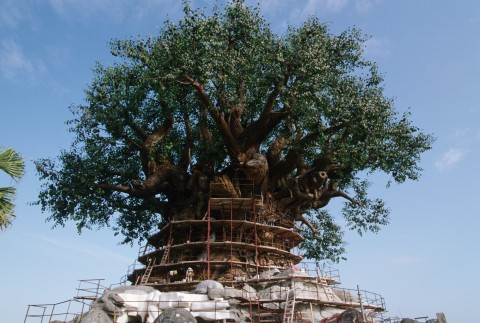 There’s something wonderful about remembering good times. Disney parks are built on the magic of memory, a hidden power which draws fans back year after year. We kicked off our series on the best memories from The Most Magical Place on Earth last week with an exploration of the 9 Things Every 80’s Kid Loved at Walt Disney World-- a decade that ended with the opening of Disney-MGM Studios.

The 90’s was a great time to be alive, especially if you were a kid. Roller skates became roller blades, Teenage Mutant Ninja Turtles and Lite Brites were all the rage, frost-tipped boy bands became a thing, and the internet arrived in homes. It was a time where both grunge and Punky Brewster simultaneously became popular, and where every week, Zack was once again Saved by the Bell.

At Walt Disney World, the 90’s was smack in the middle of the Eisner era, and both the parks and the company went through significant changes, particularly after the death of Frank Wells in 1994. A lot shifted during that decade, both good and bad. The average 90’s kid visiting Walt Disney World wouldn’t have known about any of that— they would have just known it was a pretty exciting time to be a kid at the Most Magical Place on Earth.

What were some of 90’s kids favorite memories of Walt Disney World? Here’s a few that come to mind…

The early 90’s was a time of massive expansion for Walt Disney World, particularly for Disney-MGM Studios which was still finding its feet as Disney’s third gate (there was no Disney’s Animal Kingdom yet—more on that later). These echoes were also felt somewhat at Epcot which still had its feet planted firmly in the 80’s.

Two of the best attractions from this time came thanks to the popularity of one of Disney’s most unexpectedly-successful film series. Honey, I Shrunk the Kids opened as a sleeper hit in 1989 which led to two sequels, a TV series, and two amazing Walt Disney World attractions.

The first of these was the Honey, I Shrunk The Kids Movie Set Adventure which arrived in 1990. Many a 90’s Disney kid spent countless hours here under the shade of giant blades of grass, climbing giant cookies, sliding down giant Kodak film, and riding on a giant Ant-y (he lives!!!). This place had everything a rambunctious kid could want in a playground, from a webbing course to massive slides. The best part of it was the way that kids who didn’t know each other all jumped into the adventure together—you formed friends fast and everyone dove into the same game of pretend without reservation. It’s honestly a shame Disney didn’t repurpose the playground decades later with an Ant-Man theme!

Disney-MGM Studios was only a year old when 1990 arrived, and it was one tiny, tiny park. Michael Eisner came from the film industry and had originally intended the park to function as a working studio with an emphasis on its backlot tour. While this vision would fizzle out over the course of the decade, the park came into its own in the 90’s as a premiere destination at Walt Disney World for thrills and spectacle.

Muppet*Vision 3D arrived in 1991 as a total game changer to the 3D film game. Beauty and the Beast-Live on Stage brought Broadway to the park the same year, followed by the stunning Voyage of the Little Mermaid in 1992 (which remains one of Disney’s most incredible shows for theatrical effects to this day). The park also offered live entertainment and parades based on movies out in theaters, and character greets and a stunt show starring the Teenage Mutant Ninja Turtles. These were all big hits with kids, but the one thing Disney-MGM needed the most was rides.

Boy, did Disney give us some rides.

During the 90’s Eisner became determined to make Walt Disney World a more attractive destination for teenagers. Disney Imagineers rose to this challenge by giving us the Twilight Zone Tower of Terror. The original attraction featured a single dramatic drop faster than the speed of gravity. I’ve yet to have anyone correct me on this, but I swear I still remember the spine-chilling sound of a cable snapping before the fall on that original version. While guests loved the ride, it was deemed too short to be fully satisfying, so in 1996, Disney rolled out “The Tower of Terror II” which added a second drop. Later, a third drop was added (the randomized sequence we have now didn’t come about until 2003).

The Tower of Terror was great, but the park needed something else if they wanted to draw teenagers—a roller coaster. Fans finally got their wish in 1999 with the arrival of The Rock 'n' Roller Coaster Starring Aerosmith, Disney’s first indoor roller coaster complete with barrel rolls, dynamic turns, and a speed launch from 0 to 57 mph. It was a coaster as only Disney could do it and quickly became a favorite among younger guests.

Disney has always had a certain panache for spectacles of light, color, and sound. While mainstays like the Magic Kingdom fireworks, The Main Street Electrical Parade, and the Electrical Water Pageant remained popular throughout the 80’s, 90’s kids may have some particularly strong memories of Disney’s insane light shows.

In 1991, The Main Street Electrical Parade moved to Disneyland and was replaced at Magic Kingdom with Spectromagic—a parade that many fans feel remains one of Disney’s best to this day. The show featured Disney’s first mass use of fiber-optics, featuring over 600,000 lights and 100 miles of fiber optic cable (WOW). It was incredible to behold (enough to distract from the dead eyes of those weird doll-people), and every night it concluded with the Fantasy in the Sky fireworks.

This trend of better-brighter-louder carried over to Epcot. The original Illuminations (which premiered in 1988) featured lasers, light barges, fountains, and Pichel light effects set to thundering classical music like The William Tell Overture, Ode to Joy, and Rhapsody in Blue. The show remained relatively the same until 1996, which kicked off yearly changes to the show, adding new elements almost annually like original music and new effects. I seriously can’t hear the William Tell Overture and not think of Illuminations.

No exploration of Disney’s light shows in the 90’s, however, is complete, however, without a brief trip across the country.

In 1992, Disneyland premiered one of Disney’s greatest achievements in entertainment-storytelling to date. Fantasmic! was a show unlike guests had ever seen—an epic battle between good and evil that somehow combined fireworks, water and fire effects, animatronics, projections, and characters into a gripping story. Guests would camp out seats along the Rivers of America hours before the show premiere or skip early morning rope-drops to line up for a chance to get VIP dessert party tickets for balcony seating above New Orleans Square. The show was an absolute winner, and it finally made the migration to Disney-MGM Studios in 1998.

For fans who have seen both, it’s hard to ignore the differences between the Disneyland and Walt Disney World version of Fantasmic—we’ve explored them in-depth before, and in most cases, Disneyland’s version comes out the clear winner. For 90’s kids at Walt Disney World, they couldn’t care less—Disney kids loved Fantasmic, and the studio setting just made it all the more epic at Disney-MGM Studios.