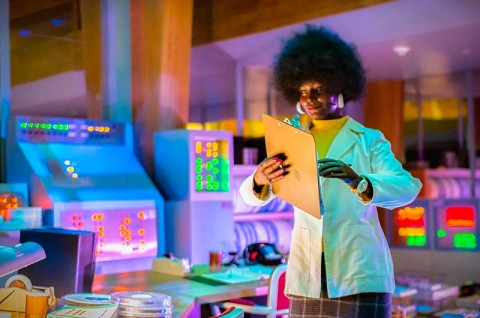 Time for a blast to the past…

The magic of Disney parks is rooted in the power of nostalgia. There are certain Disney experiences that draw fans year after year not because of cutting edge technology or thrills, but simply because we remember.

If you visited Walt Disney World as an 80’s kid (or kid-at-heart), you probably have some pretty unique memories of The Most Magical Place on Earth— a time of glam colors, inexpensive tickets, clunky cameras, and cultural fascination with the future. It’s the decade where Walt Disney World went from one gate to three, when rainbow colors were all the rage, and when Mickey stood atop Spaceship Earth (I’ve heard a firsthand account that the filmmakers got in a heap of trouble for getting that famous shot, ironically).

What were some of 80’s kids favorite memories of Walt Disney World? Here’s what comes to mind…

1. The opening of Epcot Center

Let’s get the biggest one out of the way—this may come as a shocker if you were a mid-to-late 80’s kid, but Epcot didn’t arrive at Walt Disney World until 1982!

We’ve talked before about the history of Epcot Center—the adapted realization of Walt Disney’s Experimental Prototype Community of Tomorrow. Walt was so committed to his “Florida project” during the final years of his life, that history seems to suggest he only built the Magic Kingdom as a means to make Epcot happen.

Epcot Center opened to thundering fanfare on October 1, 1982—and we mean some Prince Ali level pageantry. They released 15,000 balloons, 1000 pigeons, had 23 international performance groups dedicate the fountain, and filled an entire week with opening excitement. Fascinatingly, tickets were only $15!

The park opened with a winning mix of attractions: Spaceship Earth, The Universe of Energy, The Land, Communicore, the Journey Into Imagination pavilion, and The World of Motion. Over the course of the 80’s, other beloved attractions would arrive like Journey Into Imagination (the ride), The Living Seas, Maelstrom, Horizons, and The Wonders of Life. World Showcase would also add two pavilions (Norway and Morocco) by the end of the decade.

It’s sort of funny that Epcot eventually gained a reputation as a park too “adult” for kids, because in truth, the park was an absolute success with 80’s kids. Edutainment was king, and Epcot made science, history, and culture fun. The World of Motion made the history of transportation whimsically hilarious. The Wonders of Life gave kids a veritable funhouse (actually, a literal funhouse) of sensory wonders to explore. In ImageWorks, kids could paint with color and light and even star in a movie with Dreamfinder. The Living Seas carried us into the mysterious depths of the ocean, and Horizons swept us into our first “Choose-Your-Own-Adventure” experience in the future.

It was truly park unlike anyone had ever seen before, and 80’s kids were the first group who got to enjoy it. Ever wonder why Epcot’s vintage merch all gives off distinct 80’s throwback vibes? Now you know why. Speaking of which…

On the subject of Epcot, one of the trademarks of the 80’s was bright colors—rainbows were in. We had Rainbow Brite, Reading Rainbow, and Epcot had rainbow EVERYTHING!

You were the luckiest kid in Epcot if you got to meet Mickey and the gang in their rainbow spacesuits. At ImageWorks, you could paint with rainbows, make music with rainbows, and of course, explore the legendary rainbow tunnel (made extra famous by Michael Jackson). Every light show boasted rainbow colors, and merchandise throughout the parks offered rainbows galore. In short, you couldn’t have Disney in the 80’s without rainbows.

Note: This section previously incorrectly stated that 20,000 Leagues Under the Sea was located in Tomorrowland. It was actually Fantasyland at WDW. This has been corrected. We could go on about Epcot all day, but what about Magic Kingdom? From 1982-1989, Magic Kingdom and Epcot were Disney’s only two parks.

Plenty of the Magic Kingdom of the 80’s still survives—largely thanks to classic attractions carried over from Disneyland like Pirates of the Caribbean, Big Thunder Mountain, Peter Pan’s Flight, and It’s a Small World. The most dramatic differences were found in Fantasyland and Tomorrowland. The Fantasyland of the 80’s was a bit more pastel compared to its present form, offering low-key storybook magic in a smaller space. Tomorrowland in the 80’s was all about stark greys and clean lines bringing to mind NASA space exploration and classic science fiction.

To notice the biggest difference, you had to look up.

In the 80’s, you could take to the air and travel between Fantasyland and Tomorrowland on the Magic Kingdom Skyway—a throwback to Disneyland’s own version. We’ve written extensively about the Magic Kingdom Skyway in our Lost Legends series, but if you were an 80’s kid who wasn’t too scared of heights, you may remember tugging on your parents’ sleeve to take a ride in the sky… or two… or three.

The Skyway admittedly offered a somewhat thrilling trip (the gondolas were open, swayed quite a bit, and definitely weren’t for the faint of heart), but for those who dared, you could enjoy amazing views of the 20,000 Leagues Under the Sea lagoon, Tomorrowland Speedway, Fantasyland, Cinderella Castle, and more. I don’t know about you, but this 80’s kid was definitely excited when the Disney Skyliner showed up!

Some of Disney’s best attractions in the 80’s had one thing in common: they all let you experience the magic of flight. Not too different from today, kids clamored in the 80’s to take to the skies on Peter Pan’s Flight, Dumbo, Space Mountain (if you were tall enough!), and especially the Star Jets.

Before the Astro Orbiter towered above Tomorrowland, the ultimate thrill for smaller kids at Magic Kingdom’s Tomorrowland was the Star Jets. The Star Jets had the same bones as today’s Astro Orbiter, but the premise was a bit more grounded in space flight. The rockets were designed with distinct Space Shuttle vibes (how many of you remember wishing you could go to Space Camp back in the day?). If you could catch the ride while it was functioning and endure the queue, you got to be captain of the kingdom for your own mission to the moon.

A little bonus: Disneyland had the ultimate 80’s Tomorrowland experience when trippy SuperSpeed illusion tunnels were added to the PeopleMover (think watching an Omnimax film while moving). These mind-bending tunnels gave guests an insane experience of speed and flight. What made them so amazingly 80’s? For most of the 80’s, they used footage from the light-cycle scenes of the film TRON!

This attraction was so stinkin’ cool and was absolutely a favorite of many 80’s kids. It was brutal on parents with claustrophobia, but it just felt so real. Many a kid likely fogged up the porthole glass on the ride trying to get a closer look at giant clams, buried treasure, and more. You can learn more about this amazing attractions in our in depth feature from our Lost Legends series.

Okay, this is a distinctly personal memory, so forgive if I fudge my 80’s and 90’s information here… but who else had the pleasure of noshing down a hot-from-the-oven chocolate chip cookie from Aunt Polly’s on Tom Sawyer Island?

We’ve had our share of fun exploring Tom Sawyer Island here at Theme Park Tourist. From the beginning, the island has always been the ultimate rustic playground. My parents couldn’t get me and my brother to leave when they took us as kids and let us loose to climb on rocks, explore tunnels, and navigate the mysteries of Fort Langhorn.

Just getting to Tom Sawyer Island was an adventure for 80’s kids. You had to catch the raft at just the right time, wait in the queue, cross the forbidding expanse of the Rivers of America, and if you were extra lucky, you might even get a paper map of the island when you arrived. While Tom Sawyer Island’s exploration areas usually get most of the attention, most people don’t realize the island also hosted a quick service restaurant: Aunt Polly’s.

I don’t remember a darn thing about the food at Aunt Polly’s. What I do remember were those cookies. You could enjoy a warm baked chocolate chip cookie while sitting on the porch of Tom Sawyer Island, and they were positively divine. Aunt Polly’s still opens on occasion if crowds are high in the parks, but nothing can quite match the memory of those insane cookies back in the wonder years.