Welcome to The Disney-MGM Studios!

This brand new destination at Walt Disney World is so much more than a theme park... It's a real, working movie studio where you just might stumble upon a live taping, a real celebrity, or a hot set. No promises, though. 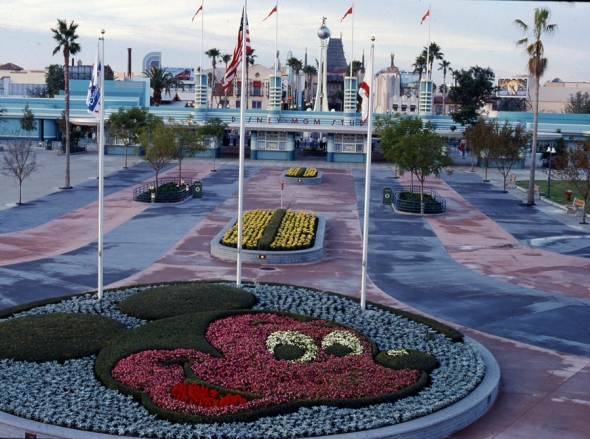 The truth is that this new theme park was a thinly veiled preemptive strike against Universal Studios, who had plans to import their world-famous Hollywood Studio Tour to Florida. Rumors have it that the new CEO here, Michael Eisner, knew about Universal's plans since he used to be in charge of Paramount Pictures, and that he fast-tracked this park to try to ward Universal away. (It didn't work. Universal still built their park just down the street, but since Disney stole their Studio Tour, Universal was forced to split the components of their Hollywood tour in separate, standalone attractions here in Florida, producing Lost Legends: JAWS, KONGfrontation, and Back to the Future: The Ride).

In any case, early visitors here to Disney-MGM Studios noted that, while it was interesting, the theme park just didn't have enough to do compared to Magic Kingdom or Epcot. And even now, just three years after the park's 1989 opening, the signature Studio Tour is looking a little... well... empty. Disney's efforts to turn Orlando into a new moviemaking destination for the stars doesn't seem to have stuck, which leaves the Disney-MGM Studios in need of something to do. 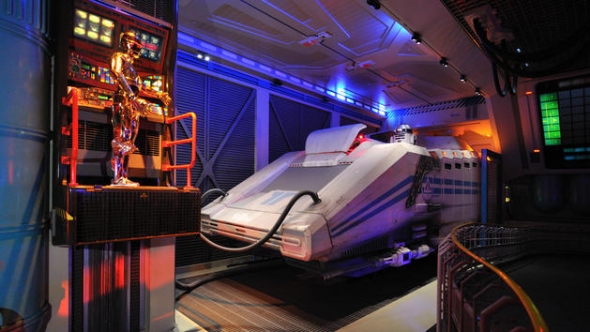 Luckily, Disney fast-tracked a copy of Disneyland's Lost Legend: STAR TOURS that's right at home here, as well as an Indiana Jones Epic Stunt Spectacular based on the brand new Raiders of the Lost Ark. They also opened up the "Streets of America" that had once been part of the tram tour.

By annexing the old street sets to the theme park, Disney was able to finish off the vision Eisner and Jim Henson had had from the park's earliest days... a new land called Muppet Studios. As a child of the '70s, '80s, or '90s, you've likely grown up with the Muppets on television, in theaters, and in Happy Meals. Just as you'd never expect Mickey Mouse or Ariel to fall out of favor, it's clear that Kermit and his friends will be icons for many decades to come.

Click and expand for a much larger and more detailed view. Image: Disney / Jim Henson Productions

And here at the Disney-MGM Studios, they have their own lot where they produce their feature films. Passing into the whimsical backlot, you might get the impression that it's modeled after New York. All the better to serve as the Muppets' hot set.

But right away, one structure is likely to catch your eye. At the center of this studio's plaza is a gleaming bronze fountain, clearly modeled after the iconic entry to Universal Studios Hollywood. But here, the brass figures aren't accomplished members of a film crew, but Muppets. Gonzo is immortalized mid-fall as he and his bullhorn head into the water. A pair of rats row rat-sized rowboats across the fountain. Fozzie is balanced on a floating brass barrel trying to grip a camera and an umbrella at once. And reigning over it all is Lady Liberty herself... Or, Miss Piggy's best impression of her, water streaming out of her crown and torch. 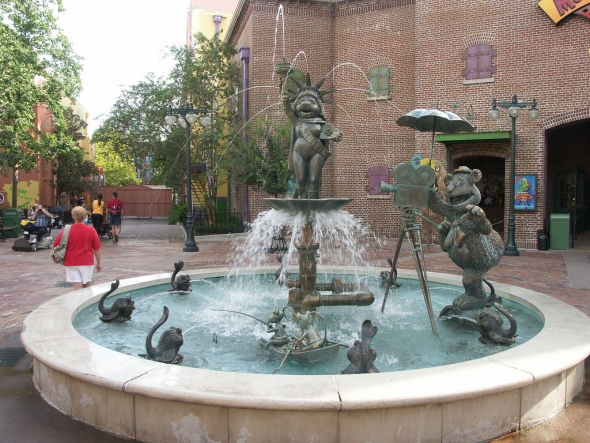 It's the perfect central icon for a land and unlike anything Disney's created before.

Beyond the fountain is a towering red-brick building. Its clocktower serves as the tether point for a giant hot air balloon in trippy technicolor serving as the land's weenie. It reads, Muppet Studios. 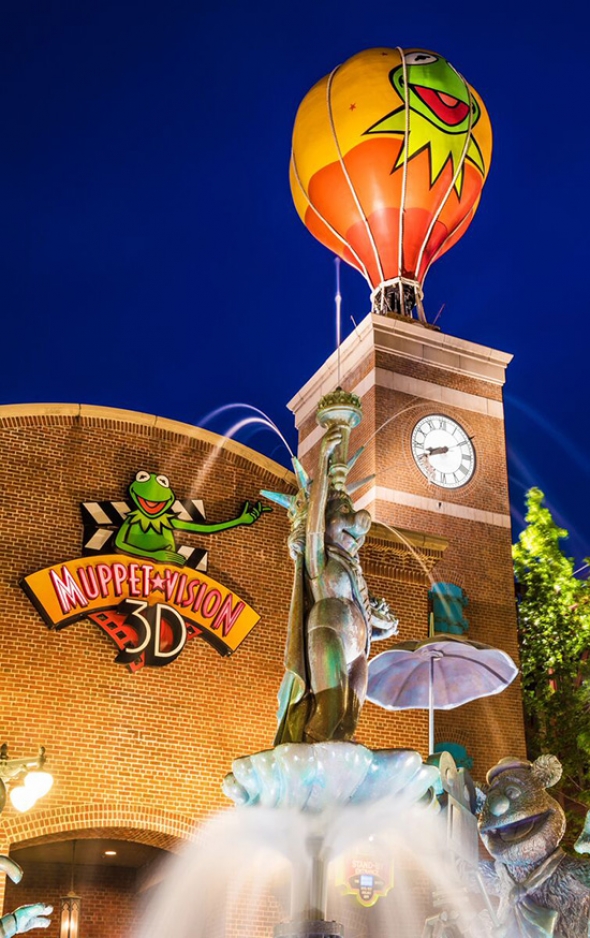 Inside this brick warehouse is the first of the land's must-see attractions: Muppet*Vision 3D. A cutting edge jaunt through the inner workings of the Studio, this 3D feature gives you an unparalleled glimpse into the stages, sets, changing rooms, laboratories, and prank-filled closets of the Studio. As you can imagine, the tour is handled professionally and courteously, and all goes exactly as planned. Well... kinda. 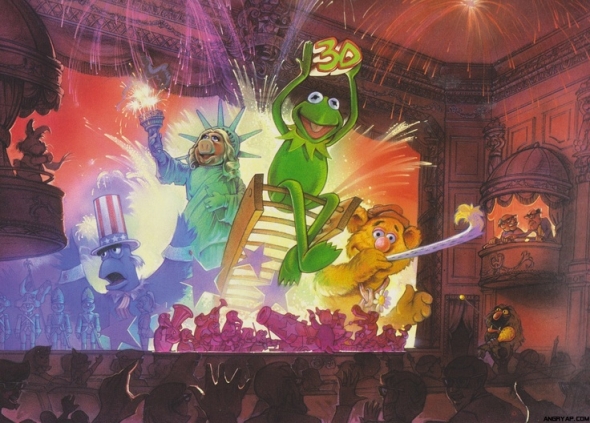 The show exits into the Stage One Company Store, which – fans will note – is the set of the Happiness Hotel from The Great Muppet Caper, repurposed as a tchochkes shop.

Exiting from Muppet*Vision, you'll notice that the back of its showbuilding doesn't carry through with the elegant red-brick plaza out front. Rather, this side of the studio soundstage is decked out in half-finished paintings, colorful pipes, gags, and murals. That's intentional! Sure, it's what you'd expect the Muppets to do with the side of the building that's not forward-facing. But it's also a nod to a very real event. In 1964, as the Muppets crew waited in NBC Studios' green room to go on the Jack Paar show, they opened a closet and decided to waste time by painting the pipes inside... an artifact saved and now shared on NBC studio tours.

In any case, there's so much more to see in this zany backlot.

For example, you'll likely need reservations to dine at The Great Gonzo's Pizza Pandemonium Parlor. In the same style as the Hard Rock Cafe or Planet Hollywood, this star-studded dining experience allows you a once-in-a-lifetime look at some of the Muppets' real artifacts and costumes. But when Gonzo and Rizzo are in charge, you can bet your dining experience will be... exceptional. For one thing, your meal comes delivered on a tray carried by an exhausted rat (an animatronic on a track), racing directly to your table. And it's the Muppets, so you shouldn't be surprised when an explosion from the kitchen rocks the building, sending the doors bursting open, with smoke and chicken feathers flying into the dining room. 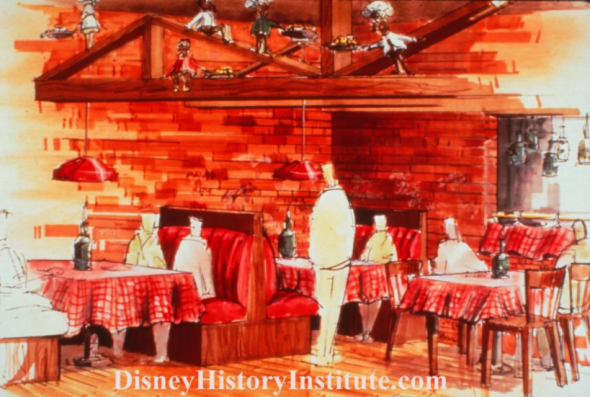 Of course, in the style of the 50's Prime Time Cafe, you can bet that the staff is on it, hurriedly and embarassingly tidying up and apologizing for the ruckus... and trying to distract you from the unmistakable sound of Gonzo climbing through the air ducts overhead.

Next door beneath an inflatable hot air balloon of his head is Swedish Chef's Cooking School, a unique character encounter attraction where we get to watch the Muppets' unintelligible head chef battle his ingredients for control of a meal.

By far, though, the land's anchor has to be The Great Muppet Movie Ride. Guests would enter this incredible, in-depth dark ride through a Frankenstein style castle (with a soundstage rising conspicuously behind) for a tour of the current, in-production films the Muppets were hopelessly working on.

An E-Ticket in its own right, this astounding oversized dark ride would've been packed with animatronics and special effects. Jim Henson himself described the experience as "a backstage ride explaining how movies were shot... and all the information is wrong."

In this intentional spoof of the Great Movie Ride, you'll see the greatest scenes in film history brought to life as only the Muppets can... And in each famous recreation, Statler and Waldorf – the Muppets' resident retiree critics – would be on hand to offer their analysis. 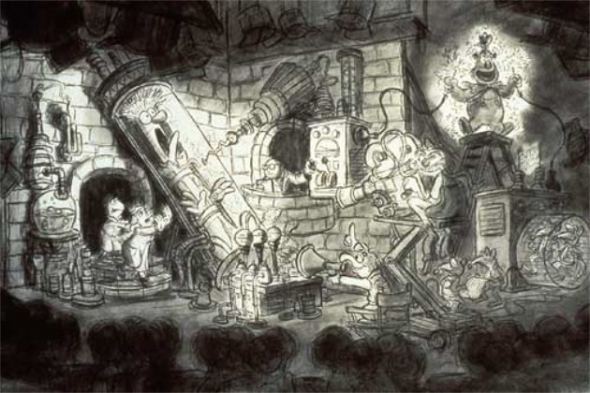 Click and expand the image above to get a sense of all the mayhem taking place on the set of the Muppets' Frankenstein. The details are endless, and all brought to life through an animatronic cast the likes of which Disney hasn't seen since Splash Mountain.

The Great Muppet Movie Ride would even poke fun at Disney's best, with the Muppets' live action remake of Peter Pan looking a little unusual, with Miss Piggy's Tinkerbell really hogging the spotlight. 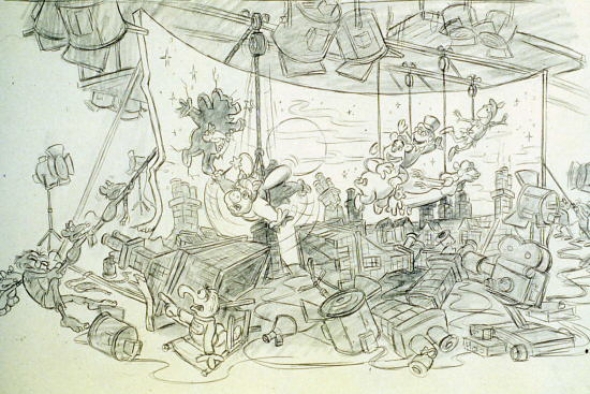 Muppet Studios would've been a headlining land at the Disney-MGM Studios, and would likely be a fan favorite to this day. But it never came to be.

It's not that Disney Imagineers soured on the idea.

It's not that Eisner lost interest. (In fact, he'd spend the next decade trying to make Muppet Studios happen.)

It's not that the Muppets lost their popular appeal.

The real reason for the cancellation of Muppet Studios is much more sobering. Read on...