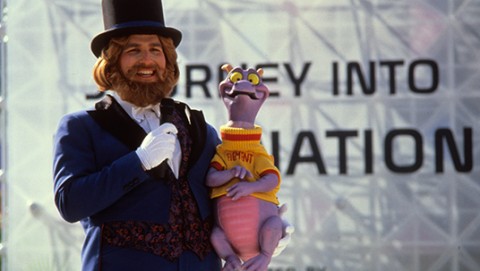 Walt Disney was a firm believer that his parks would never be completed; that they would continue to change and grow and evolve for the rest of their lives. But that didn’t just mean building new attractions and closing old ones. Walt spoke of “plussing” rides in his park – making simple (or not-so-simple) changes that would go a long way to improve the overall experience.

Since we already counted down the top 10 best examples of  “plussing” in Disney Parks attractions, we got to dig into how Walt’s idea of a continually refreshed experience has benefitted some rides tremendously. But in their haste to keep aging rides “hip,” Disney has made a few foibles. Here, we’ve collected six examples of rides that Disney set out to “plus,” but might really have “minused.” And worse, a botched “plus” on a classic ride is a double slap: a bad “new” ride, and a lost old one.

Throughout our countdown, you'll find links to our Lost Legends and Declassified Disasters features that will give you the full story of forgotten favorites and – in some unfortunately cases – their failed follow-ups. Jump to those in-depth features to get the before-during-and-after of some of the world's most well-known rides.

There’s not too much about the Finding Nemo Submarine Voyage that challenges the status quo. Maybe that’s the problem. Walt Disney proudly introduced the Submarine Voyage attraction in 1959 as one of the first ever “E-ticket” designated rides. It thrilled guests for years in Disneyland’s Tomorrowland, and even inspired a Jules Verne themed fantasy spinoff in Magic Kingdom’s Fantasyland – the Lost Legends: 20,000 Leagues Under the Sea.

However, in the 1990s, the two submarine rides in California and Florida both closed. They were expensive to operate, had a low hourly capacity, and were victims of a cost-cutting era in the Parks’ history. At Magic Kingdom, the former submarine lagoon sat empty for years before being filled in, eventually housing 2012's New Fantasyland expansion. In Disneyland, the ride's fate seemed sealed... until a nostalgic park president fought for its return in honor of the park's 50th Anniversary. 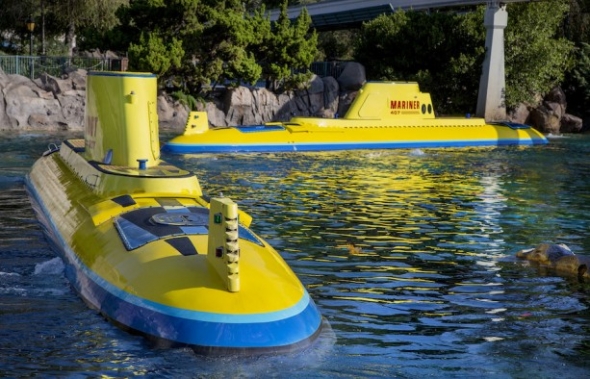 Ultimately, the Submarine Voyage did return, albeit as a signature ride in the "Pixarification" of Disney Parks. The addition of the high-earning Finding Nemo intellectual property was probably the only chance Imagineers had to save the submarine ride that Walt himself so loved... but it also meant to end of many of its physical sets in favor of underwater projections of Nemo & friends. At least such a classic and awe-inspiring ride system is saved... Admittedly, any subs are a "plus" over no subs.

Anyway, is the Finding Nemo Submarine Voyage a bad ride? Not at all. But there's no denying that many fans would prefer the return of the character-free version, with its mermaids, sea serpents, ancient ruins, coral reefs, and shipwreck graveyards in tact.

5. The Peoplemover -> The Rocket Rods

When Disneyland's "New Tomorrowland" debuted in 1967, it represented a vision of tomorrow that still resonates today: a sleek, mid-century modern future of swirling rockets and Space Age spires. That Tomorrowland was Walt's "World on the Move" – a showcase of real solutions Walt and his designers envisioned for the Atomic Age and the ensuing Space Race. Chief among its icons was the Lost Legend: The Peoplemover – a tranquil demonstration of real mass transit solutions of the future.

The Peoplemover was a gentle, functional, and spectacular attraction appropriate for all ages, with a massive hourly capacity that added kinetic energy and life to the second story of Tomorrowland – and in fact, Magic Kingdom continues to host a version of the fan-favorite ride to this day! But in the '90s, plans for New New Tomorrowlands developed, intentionally meant to flatten the simplicity of the Space Age in favor of the grittier, darker, more dystopian futures of the era's pop culture.

The "simple" idea was to replace the slow-moving Peoplemover with a new headlining thrill ride. The subject of its own in-depth analysis, the Declassified Disaster: Rocket Rods weren't just a poor replacement for the Peoplemover; they flat out didn't work. The abysmal attempt at a thrill ride had some fundamental flaws, lasting only two years on and off before closing forever. To this day, the abandoned tracks of the Peoplemover still criss-cross through Disneyland's Tomorrowland, overgrown with weeds. It's a sad reminder of a major "minus" that Imagineers will never live down.

Have you ever heard the saying, “if it ain’t broke, don’t fix it”? Apparently, Disney executives haven't. After all, when Disneyland Paris opened in 1992, the park offered some brave departures from what Disney had done in the past. For example, the park had no Tomorrowland at all, swapping it for the literary, fantasy, retro-future of a Jules Verne-inspired Discoveryland – a much better fit for European audiences than a land predicated on the Space Age.

Opening in 1995, the Lost Legend: Space Mountain - De la Terre à la Lune instantly became the park's signature attraction. On this one-of-a-kind, steampunk take on the Space Mountain concept, guests became interstellar voyagers based on the Jules Verne novel From the Earth to the Moon, wherein members of the Baltimore Gun Club were launched to the moon from the golden Columbiad Cannon. And indeed, this Space Mountain was a launched coaster, blasting guests out of the cannon and into the peak where an amazing orchestral score, three inversions, and allusions to the Georges Méliès film adaptation created a fantasy journey to the stars.

But nothing good can last. In 2005, the ride became Space Mountain: Mission 2, intentionally importing the "sci-fi" style of the American Space Mountains, including a high-energy electronic score and the replacement of Jules Verne references with exploding stars and galaxies. What's worse, in 2017 the ride became Star Wars Hyperspace Mountain: Rebel Mission, a permanent overlay that now sees guests blasts out of a golden cannon and into a "galaxy far, far away." Fans plead for the return of the original Space Mountain, but in today's IP-focused world, this "minus" seems likely to stick around.

But on the next page, we'll get to our top three worst attraction "plusses" ever – three "updates" that make fans nauseous to even think about... Read on...

stitch was not bad except for ol chili dog burp

It seems to me that the biggest complaint with Stitch's Great Escape is just that it's not the ExtraTERRORestrial Alien Encounter. When I finally got a chance to see it, it wasn't nearly as bad as everyone was making out, and it certainly didn't lack for a crowd. Forced to choose between that and Tokyo Disneyland's version of the Enchanted Tiki Room with Stitch, I'd take Stitch's Great Escape.

The loss of Space Mountain: From the Earth to the Moon was so painfully needless. It wasn't even an unpopular attraction. They just felt like messing with it for the sake of doing so, and in so doing took away what made it charming and distinct. I'm really hoping that they bring back the original Vernian elements in the refurb.

As for Alien encounter it is not totally gone there is still a semi attraction still located on property based on the original attraction located inside Disney Quest. It is called Invasion! An ExtraTERRORestrial Alien Encounter.

Unfortunately, this attraction is now gone along with DisneyQuest.

For me, the "plussing" of EPCOT's Test Track is a fail also. What was once a unique look at what goes behind the scenes of the automotive industry has turned into a muddled, somewhat generic Tron ripoff.