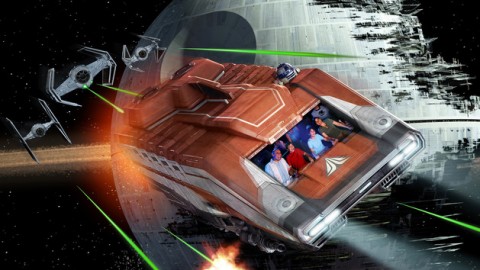 Walt Disney believed that his parks would never be complete so long as there was imagination left in the world. That didn’t just apply to new additions. Walt reportedly would walk through Disneyland Park telling Cast Members to “plus it!” What he meant was that there are always changes – big and small – that could drastically improve an attraction for guests.

Of course, Disney doesn't always get it right. That's why we chronicled 6 of Disney's Worst Attempts to "Plus" a Ride in its own countdown feature, seeing what happens when changes go too far and crush classics.

The good news is, more often than not small plusses go a long way in reinvigorating aging attractions. So here, we’ve collected ten of the best examples of “plussing” existing Disney Parks rides through changes – usually the big kind, but not always – that resonate with guests. These “plussed” attractions have followed Walt’s original suggestion stay fresh and advanced for a new generation and beyond. Which of these very special improvements do you think have made a noticeable difference on the ride? Most of the entries include a link to a YouTube video demonstrating the change. No worries - clicking those links will open the video in a new tab. 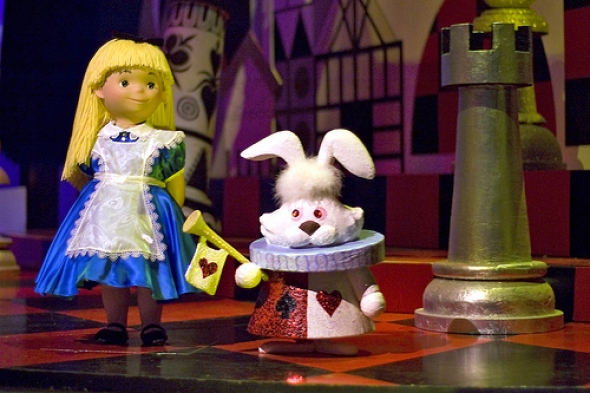 This one’s controversial, and some probably argue that this belongs on the list of the worst “plussing” to occur in Disney Parks. “it’s a small world” at Disneyland was closed throughout almost all of 2008 as the ride’s 1964 infrastructure was updated and improved, and along the way, Disney decided to do something that ruffled lots of feathers in the fan community: they added Disney characters to the ride.

So now, while sailing through China, you might notice Mulan and Mushu as “small world” dolls along the banks of the flume. Pinocchio is in Italy; Aladdin and Jasmine fly overhead in the Middle East; Cinderella is in France; even Ariel, Flounder, Nemo, and Dory can be spotted in the South Seas room. In all, 37 Disney character figures were added to the ride – all of them matching the general style of small world dolls. They’re not exactly hidden. In fact, they’re pretty front-and-center in each room. Fans argued that the dolls defeated the purpose of the ride (which is supposed to tell a story of international unity) and instead made it a game of seek-and-find.

We understand the controversy and certainly don’t think that the ride needed the added characters to be relevant, classic, or enjoyable. But what’s done is done, and Disneyland’s version of the ride now has a little something extra to help children engage with the ride. All-in-all, worse things could’ve happened, and this “plussing” is a good one to come in at number ten on our list. 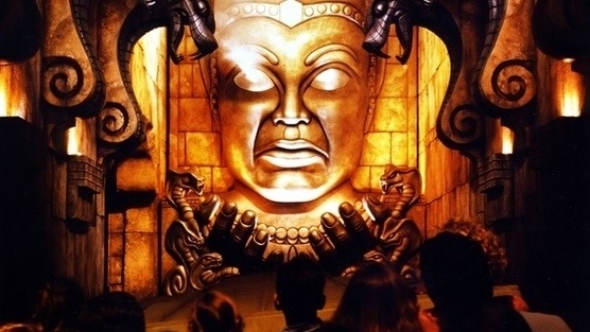 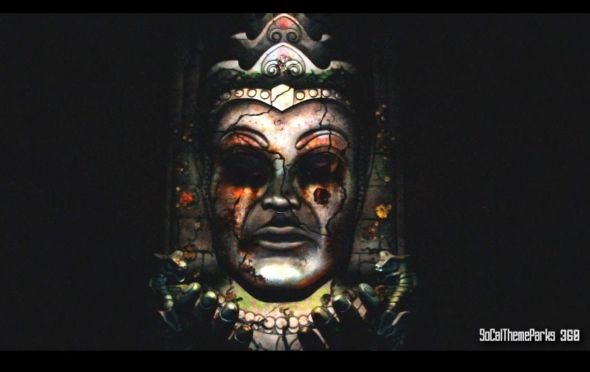 Location: Disneyland
The Plus: Mara comes to life as never before
Video: The "old" Mara vs. the new Mara projection effects

Indiana Jones Adventure never had any trouble pulling in crowds. The wild, off-roading dark ride through a cursed ancient temple was one of Disney’s darkest and most intense rides from its opening in 1995. On the ride, guests are ushered into one of three ancient chambers where they receive the gift of Timeless Youth, Early Riches, or Visions of the Future… that is, unless they look into the dark and corroded eye of the temple god, Mara.

Entering the Chamber of Destiny where their treasure awaits, guests can spot a 15-foot-tall carving of Mara on the back wall of the chamber. When they (inevitably) looked into the statue’s eyes, they would blow fog and turn a menacing deep red as his voice echoed. Scary enough, but Disney didn’t let the attraction age prematurely.

In August 2013, as one of their first installations of the now-famous texture-mapped projection technology, Mara was outfitted with a new effect: the god opens his eyes as guests enter the chamber. Upon seeing riders, his eyes narrow. What’s even better is that Mara’s reaction is personalized to each of the ride’s three ‘pathways.’ In the Fountain of Youth room, his face cracks and ages (see video link above). In the Treasure room, it rusts; and if Visions of the Future were destined to riders, his third eye crackles with lightning and his eyes glow red. Best of all, Disney surprised riders by installing the change overnight, with no announcement, no fanfare, and no refurbishment closure. 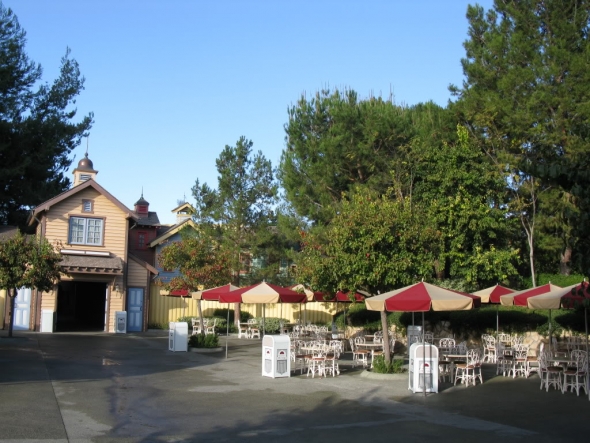 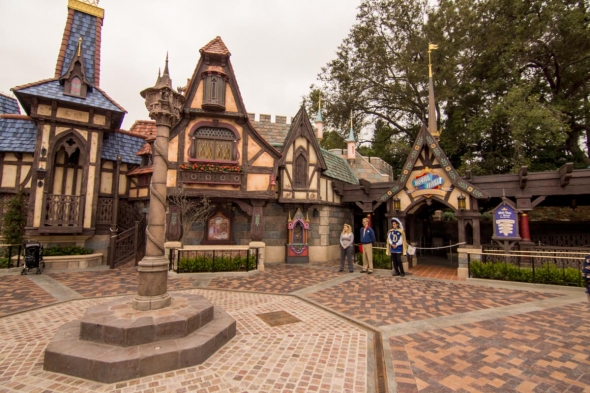 Location: Disneyland
The Plus: A sort of New Fantasyland that defied fans' low expectations and outrage

Disney Parks fans can be incredibly protective of the park and aggressively battle any proposed changes. That’s especially true at Disneyland – the only park Walt himself ever stepped foot in – where nooks and crannies remaining from Walt’s time are increasingly more rare. Such is the case of Carnation Gardens, a tiny plaza tucked to the side of Sleeping Beauty Castle. The wide plaza contained a striped red and white tent where swing dancing was commonplace on the weekends.

Fans reacted with outrage and disgust at the idea that Carnation Gardens would be renovated and absorbed into Fantasyland, taking on the land’s European exteriors and a Disney Princess-centric style. Even Disney’s promise that swing dancing would continue to be a staple of the area did little to quell the anger.

Then, the area opened. Charming to a fault, as detailed as Magic Kingdom’s New Fantasyland, and with wonderful allusions to Pinocchio and Hunchback of Notre Dame, Fantasy Faire is everything Disney fans didn’t know they wanted. As promised, the dancing tent returned – dressed now as a medieval Vaudeville theatre. It features incredible, unique, humorous adaptations of Disney animated films by day… and yes, swing dancing by night. 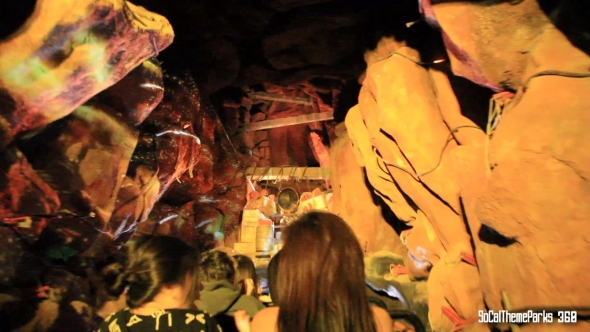 Occasionally, Disney undertakes the behemoth task of completely re-building their rides from scratch. Such is the case with these two Disneyland mountain peaks.

Space Mountain was closed for a complete rebuild before the park’s 50th anniversary. The ride was closed for two years as it was re-built piece by piece with new trains and effects. Maybe coolest of all, when the ride re-opened in 2005, it was filled with 21st century special effects and on-board audio that syncs up to the ride experience. After riding Space Mountain with perfectly synchronized music (see video link above), it’s hard to imagine riding around in the dark without anything to listen to. All those upgrades also allow the ride to become Space Mountain: Ghost Galaxy every Halloween (where an intergalactic ghoul cases the train through the cosmos with legitimately scary effects and music) and the popular Star Wars themed Hyperspace Mountain in the interim.

Then, in 2012, Big Thunder Mountain was closed for a similarly large-scale refurbishment, re-built from scratch. After more than a year, it re-opened in March 2014 with a very cool addition: an explosive finale (see video link above) using the same projected texture-mapping technology as Indiana Jones Adventure. The ride’s final lift hill is now alight (literally) with explosive smoke cannons, raining sparks, and more.

Both Space Mountain and Big Thunder Mountain’s respective “plussing” at Disneyland shows that a little bit can go a long way in making a coaster from the 1970s a must-ride that feels brand-new.

6. The Twilight Zone Tower of Terror 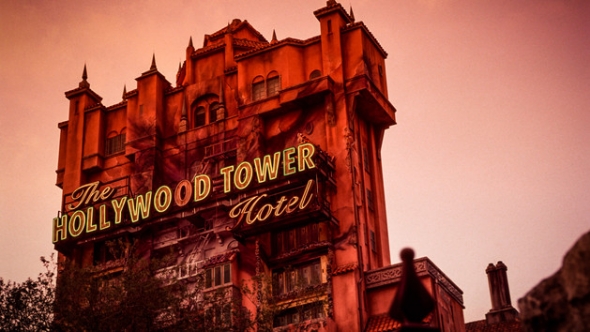 Location: Disney's Hollywood Studios
The Plus: The Tower is put in control and the results are staggering

Twilight Zone Tower of Terror at Disney’s Hollywood Studios has gone through a number of re-programming efforts over its lifetime. The current configuration is the fourth – referred to as “Tower 4” by fans – and is almost certainly the best one yet. While the Tower of Terror rides in Tokyo, Paris, and California all followed a simple prescribed drop profile that’s the same every time, the original Tower of Terror in Orlando carries the slogan, “Never the Same Fear Twice.”

While it’s not totally randomized as some people think, Orlando’s tower does have four pre-determined ride programs that an on-ride computer randomly selects from during the ride. Each of the four possible programs has at least one “full-length” drop from the height of the tower, so you’re guaranteed a thrill.

Why the other Towers haven’t received “randomized” sequencing is anyone’s guess, but for now, it’s yet another reason Orlando’s version of the ride is clearly the best version in the world. It also inspires the eerie tagline “The Tower is in Control.” That it is.

The Little Mermaid is still a super cheesey, laughable ride. Never a line to see it. List was solid until then.

Nothing about the awesome plussing of the Haunted Mansion at the Magic Kingdom?? The new staircase area replacing the giant spiders is absolutely amazing. Not to mention the new bride in the attic and the interactive hitchhiking ghosts. Yes, I know that there were mixed reactions to the new interactive queue, but it works for the most part. Overall, the new Haunted Mansion is the way plussing a Disney ride should always be like!

Seconded. The refresh of the Florida Haunted Mansion was absolutely top-notch.

Ummm... Pirates? Let me be honest. I, like nearly everyone, was against the idea of Sparrow and Barboza being added to the ride. However, my opinion changed immediately when I first went on it saw how well they fit in. I was expecting this change to top the list.