Review - Zufari: Ride into Africa! at Chessington World of Adventures 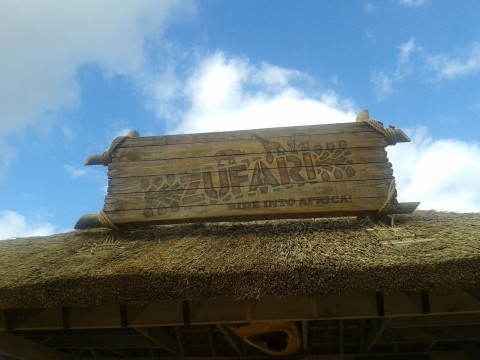 Chessington World of Adventures has long combined elements of both a zoo and a theme park, helping it to become one of the most popular tourist attractions in the UK. With its new attraction for the 2013 season, the park is attempting to blend animal exhibits with a traditional ride experience - but does Zufari: Ride into Africa! succeed?

Clearly inspired by the popular Kilimanjaro Safaris attraction at Disney's Animal Kingdom, as well as Rhino Rally at Busch Gardens Tampa, Chessington World of Adventure's new addition is its most ambitious for some time. It takes guests on a safari-style tour around a number of animal enclosures, hosting exotic species such as white rhinos, giraffes and flamingos. 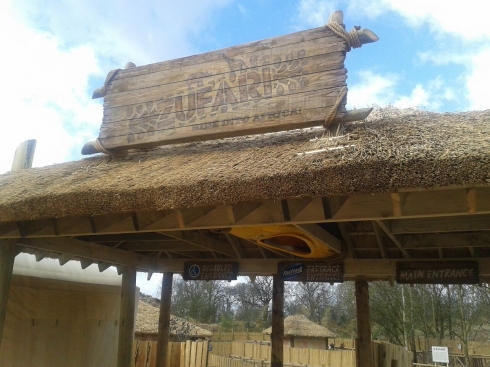 Zufari: Ride into Africa! occupies a sizeable chunk of space in the Wanyama Village & Reserve area of the park, which opened back in 2010. It represents a huge investment from Chessington, incorporating interactive animation, full-sized safari trucks and several all-new animal enclosures. We headed to the park to see if the heavy spending has paid off.

Preparing for the safari

Zufari: Ride into Africa! is accessible via a bridge located close Tomb Blaster and Rameses Revenge in the Forbidden Kingdom area. Unusually, guests are required to walk some distance to reach the Wanyama Village & Reserve's other main attraction, the savannah located in front of the Holiday Inn Chessington. 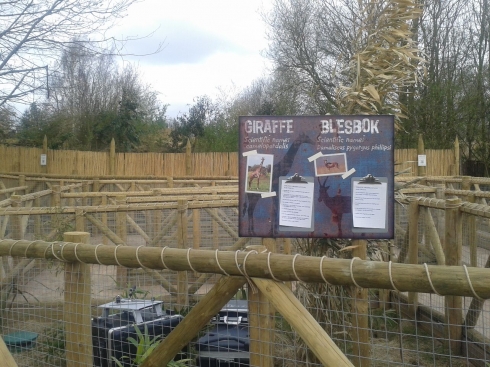 Some basic information boards are located in the queue line.

The ride's queue line is somewhat spartan, although the park has scattered a few props around to make it look as though preparations for a safari are underway. Midway through the line, guests are asked to pose for a photo in front of a green screen, which replaces the on-board photos common on many of the park's other rides.

Overall, the queue area for Zufari: Ride into Africa is fairly uninspiring. While a few information boards are scattered around, Chessington has missed the opportunity to really educate guests about the animals that they are about to see. This would have both built anticipation for the journey ahead, and compensated for the lack of time for commentary about the animals during the ride itself. 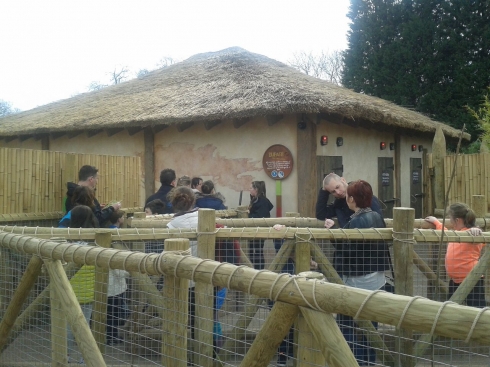 Upon reaching the front of the queue, guests wait outside one of three doors. When these eventually open, they are herded into an indoor pre-show area. There, they are introduced to the backstory of the ride by a member of the fictional A.C.R.E. (African Conservation, Research & Exploration), which manages research on the Zufari site. 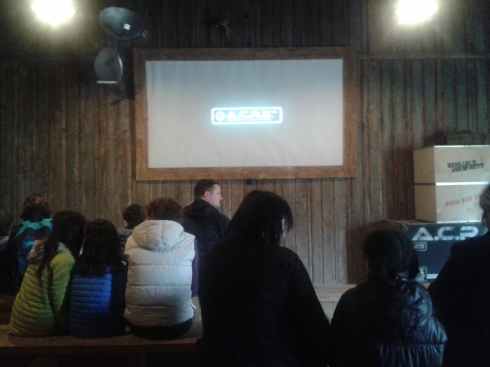 The pre-show is aimed primarily at younger kids.

In what amounts to a low-rent version of attractions such as Disney's Turtle Talk with Crush, an animated lemur then interacts with guests. A staff member voices the character, using cameras located in the room to identify individuals and challenge them to perform feats such as impersonating a monkey.

The animation in the pre-show looks somewhat cheap, with the lemur's lip-synching being particularly problematic. While it will raise a few laughs among Chessington's younger visitors, it really does little to build excitement about the ride ahead other than briefly mentioning a "dangerous cave". The park scores points for effort for trying out the animation technology, but the pre-show feels like another missed opportunity to introduce the real stars of Zufari: the animals.

Zufari: Ride into Africa! features a minimum height restriction of 1.1 metres, with children under 1.3 metres required to be accompanied by a person aged 16 or over. This makes the choice of pre-show even stranger - the young kids that it would appeal to most are not even able to witness it. 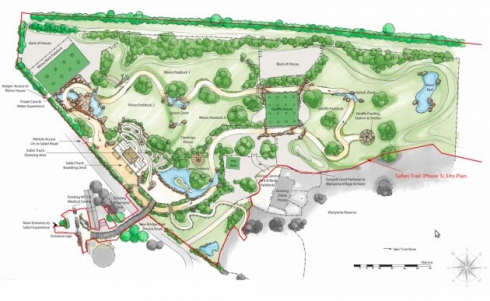 The Zufari trail winds around a number of animal enclosures.Image © Chessington World of Adventures

Upon exiting the pre-show building, riders board one of Chessington's fleet of Zufari trucks, each of which can hold up to thirty guests in six rows of five. 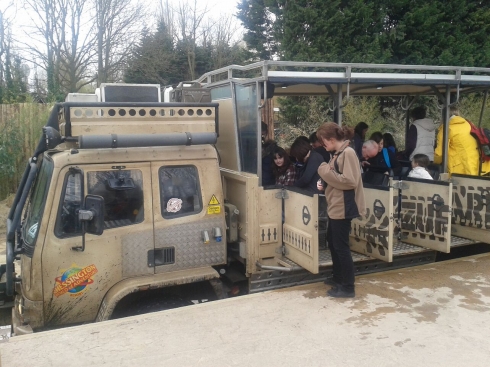 Zufari's fleet of trucks can carry 30 guests each.

Naturally, you'll get slightly better views (and photo-taking opportunities) from the seats on either side of the truck, rather than in the middle. However, you don't lose out too much by sitting in the centre. 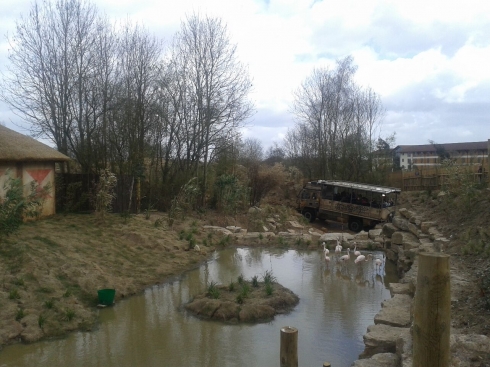 The start of the journey is a little uninspiring, with a prominent view of the Holiday Inn Chessington breaking any illusion that riders are really in Africa. The trucks pause for a while at a pool that holds a flock of bright pink flamingos (and, on our journey at least, a few visiting ducks). A short commentary introduces the birds, before the truck swiftly pulls away into the next section. 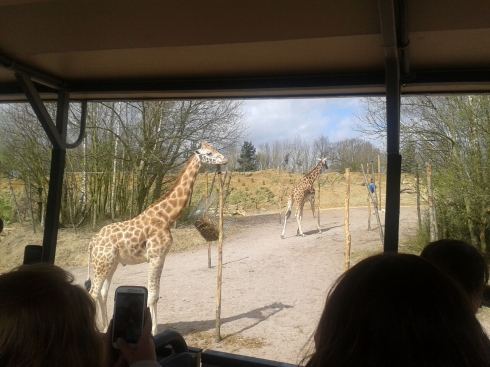 All guests get a great view of Zufari's resident giraffes.

This, for us, was where Zufari really began to live up to its potential. Rounding the bend into a small "savannah", we came face-to-face with three enormous giraffes, who were walking around in search of food. Lying next to them were to several scimitar-horned oryx, taking advantage of the relatively sunny spring weather. Zebras, meanwhile, were grazing on the grass. A collective gasp echoed around the interior of the truck, as guests hastily reached for their cameras. 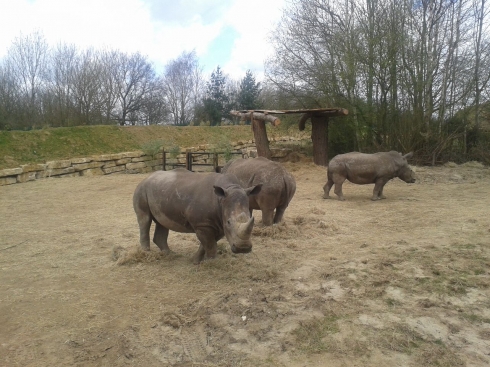 Zufari's trio of rhinos are an impressive sight.

The next area was just as impressive, bringing riders up-close to three white rhinos - Kanty, Dozer and Gyasi. The enclosures for the various animals are either integrated or cleverly separated by concealed fences and water, making the journey between them seamless.

Unfortunately, the safari experience is over all-too-quickly, with little time for the guests to actually learn anything more than basic facts about the animals they are seeing. We certainly didn't feel short-changed, but we didn't feel fully satisfied by the ride's duration, either.

After leaving the rhino enclosure, guests are forced by a "fallen tree" to take a detour into the dangerous cave that was mentioned during the pre-show. Here, guests learn why their seats were wet when they boarded the truck. Water jets spray on them from either side, before the cave floods in an effect reminiscent of Catastrophe Canyon in the studio tours at Disney's Hollywood Studios and Walt Disney Studios, Paris (but on a smaller scale). 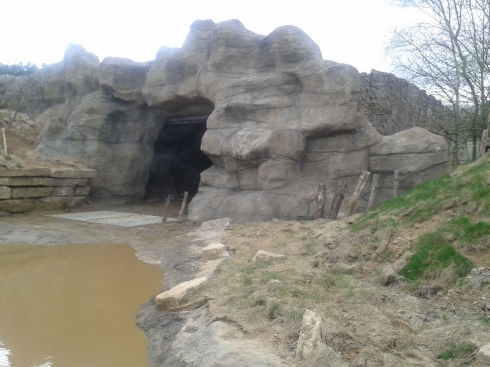 Zufari's cave looks benign from the outside...

As it exits the cave, the truck passes under a waterfall, threatening to drench everyone on board. Its roof, though, does a good job of deflecting the water, and most guests (even those seated at the edge) will receive only a mild sprinkling.

The cave section feels a little tacked-on to the end of Zufari: Ride into Africa!, but we have to admit that it is undeniably good fun. Given the choice, though, we'd swap it for more time with the animals.

Zufari: Ride into Africa! is a solid addition to Chessington World of Adventure's line-up, and the park should be commended for taking on such an ambitious project. Taken together with the existing Wanyama Village & Reserve savannah, it means that the park has added a huge Africa-themed zone over the past three years. It's also great to see the zoo and theme park elements of the park being treated as one, rather than as two separate entities.

Guests expecting a Kilimanjaro Safaris-style experience will be disappointed. In reality, Chessington could never hope to compete with the Disney attraction, which spans an area as large as the entire Magic Kingdom theme park. Still, it has done a nice job of bringing a "taste" of that experience to the UK, even if we wish the ride were just a little longer. 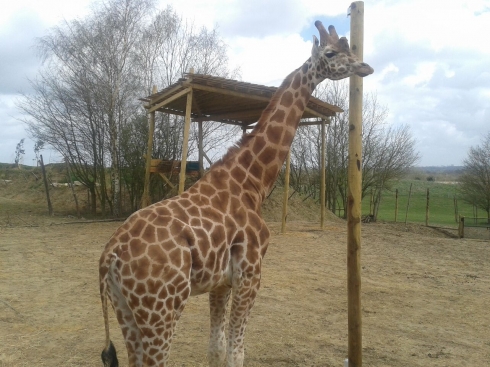 The real star of the show.

Perhaps the biggest drawback of the current Zufari: Ride into Africa! setup is the lack of information that is provided on the animals that are its stars. There's little time for this during the ride itself, and few guests are listening to the commentary anyway. But the interactive pre-show feels like a way to pad out the attraction's duration, rather than really adding anything to the experience. It would be nice to see it updated to provide more background on the various species seen by guests in future.

Another major issue with Zufari: Ride into Africa! is its 1.1 metre height limit. No such restriction exists on Disney's Kilimanjaro Safaris, and it's a real shame that smaller children who would love the ride are unable to experience it. Of course, there are laws regarding the use of booster seats in vehicles that apply in the UK, and capacity may be hit if they were to be used on Zufari. Still, we can't help hoping for some sort of compromise solution in future - we witnessed several disappointed kids being turned away at the attraction's entrance.

We visited on a quiet day, but were still forced to wait for at least 15 minutes between joining the (empty) queue and boarding the ride. Inevitably, this raises questions about capacity, although Chessington should be able to add more trucks on busy days. Still, the length of the queue line suggests that guests could be in for long waits during the peak season.

Zufari: Ride into Africa! doesn't quite qualify for "classic" status, and we'd still rate Flamingo Land's Lost River Ride as the best hybrid theme park ride / animal exhibit in the UK. But it is a great addition to Chessington's already strong roster of attractions, and an essential ride for every guest at the park to try at least once.

I think Zufari would have been a lot better without the preshow.

Sounds like Zufari tried to be a bit of everything and might've spread itself a little too thin in some areas. Still, a great addition to the park, I'd say!