The signature attraction at Disney's Animal Kingdom, Kilimanjaro Safaris takes guests on a real off-roading adventure past real animals (with seemingly no fences) that takes place on a parcel of land equal in size to the entire Magic Kingdom park.

From 2016, an evening version of the ride, dubbed Kilimanjaro Safaris: After Dark is also on offer. The Imagineers have carefully recreated the look of the sunset's glow with special lighting that will allow guests to enjoy this attraction after the sun has gone down. Though some species will not be out during the evening hours (and there might be some daily downtime while the "day shift" is moved into their evening lodgings), the park has recently introduced nocturnal species like African wild dogs and hyenas that should be active during late hours. 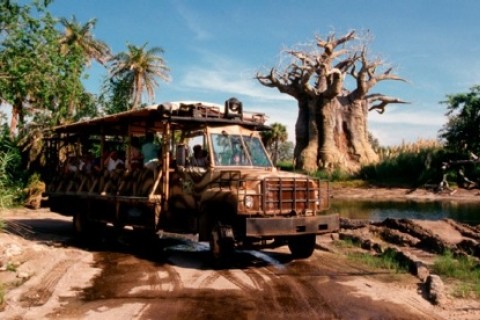 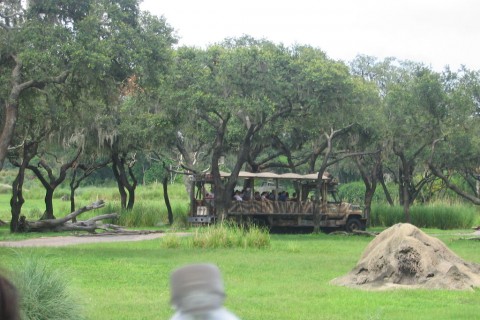 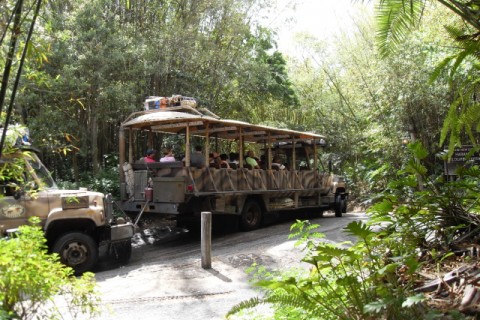 See all photos of Kilimanjaro Safaris

One of the main rides at Animal Kingdom is the Kilimanjaro Safaris. Set on the edge of a fictitious African town named Harambe, the Kilimanjaro Safaris transports guests to Africa in 32-passenger large open-sided motor vehicles driven by a nature guide. The environment surrounding the ride path is filled with the types of vegetation and wild animal species typical of the African wilderness making it feel like you've left Florida. Excitement on the ride path includes animals in their natural habitat and a journey over an old bridge that collapses halfway across.

One of the biggest complaints many zoo fans have is that Kilimanjaro Safari animals are only viewable from the bumpy ride which only pauses a few seconds near each animal.

Tip: To see even more animals visit the Animal Kingdom Lodge (for free, you don't have to stay there to view the animals).

Walt Disney World's Animal Kingdom theme park may be the youngest of the Florida parks, and it may currently have the fewest "must see" attractions, but it's well on its way to changing that perception. Sure, the Disney company has big plans in mind for turning this half-day park into an all-day park with all new attractions on the horizon.......but even still, they managed to incorporate a few wonderful attractions into it from the very beginning, one of which is Kilimanjaro Safaris.

The basic premise of this ride (which has had its story/spiel changed a bit in recent months) is that you are embarking on a trek through the African savannah (or safari) to showcase the beauty and majesty of some of the various animal life found in Africa as well as some of their more interesting plants as well (i.e. the upside-down tree). Previous storylines for this ride had you working with the park rangers to find and stop poachers who were after elephant tusks and had managed to kidnap "Little Red", a baby African elephant. That line has since been scrapped, as it must not have tested too well on surveys of parkgoers. Now the ride is a bit more leisurely, giving the riders a bit more time to get some great shots with their cameras.

Among the many animals that can typically be seen throughout the course of Kilimanjaro Safaris: hippos, crocodiles, antelope, mandrills, lions, rhinos, giraffes, ostriches, and flamingos. Along the way you can spot ostrich nests (with eggs), huge clay ant-hills, and more. Of course, not all of the animals can be counted on being seen, such as the more popular ones like the lions. Sometimes they'll be lying out on the rocks, and other times they'll be tucked away in the shade and you really have to crane your neck to catch a partial glimpse. You also never know exactly what you'll see when your truck comes around each curve - on one instance, we came right around that curve just in time to catch a rhino standing there relieving itself. Needless to say, that brought a few laughs to our truckful of tourists.

Where Disney truly excels is in making this kind of experience so immersive for its guests. If one didn't know better, they would really feel they were out in the plains of Africa. Throughout the ride it may look like the more dangerous animals still have free reign to come down and approach the truck, but Disney imagineers have brilliantly and carefully constructed the entire landscape of the attraction in a way that the guest cannot see the boundaries that prevent the animals from crossing over (well, some of the animals, anyway, because on one trip we were on, our truck had to wait a few minutes to proceed because one particularly huge white rhino decided to cross in front of us on the road to eat some grass).

** Overall, Kilimanjaro Safaris is one of WDW's (not just Animal Kingdom) best all-around attractions. It's been said to be the realization of what Walt Disney had originally wanted out of his Jungle Cruise attraction, since he wanted to have actual animals as part of it. This ride is one that we always do on every trip and never miss it. One ride-through of it yourself and you very well find that to be the same. However, be aware that as a very popular attraction, sometimes the wait times can get pretty backed up, so if at all possible, either get there early on in the day or grab yourself (and your group) Fastpasses.