Though the big lines at Star Wars: Galaxy's Edge at Disneyland so far have been for Oga's Cantina and Sa'vi's Workshop (where you can make your own lightsaber), another big merchandise sales item inside this new land has been replica Jedi robes, which many guests have been purchasing, and wearing around this new land, in the same way that guests visiting The Wizarding World of Harry Potter wear Hogwarts robes. However, while some guests have been able to wear these robes around the land without issue, others have been stopped by Cast Members for violating the park's costume policy. And while there was initially some gray area, now Disney has taken some time to clarify its position on costumes inside this new land.

Here's what you can't wear 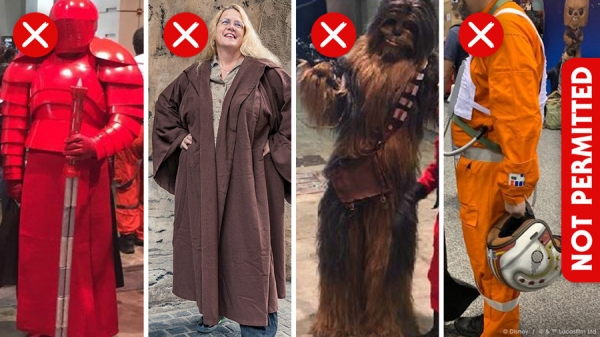 Disney has announced that costumes, including robes and other articles of clothing purchased inside Star Wars: Galaxy's Edge may not be worn by guests 14 years of age or older. Unfortunately, this is in line with their non-Halloween policy that has been in place for several years, and isn't exactly all that shocking. Many were hoping that Disneyland would take a cue from their next-door neighbors at Universal Studios Hollywood and allow guests to dress in "official" clothes from inside this land, but it looks like Disneyland is sticking to their guns on this issue, and are not allowing guests to wear costumes of any sort inside Star Wars: Galaxy's Edge. And unfortunately, since Halloween Time events have been moved to Disney California Adventure, Disneyland guests won't even be able to dress up inside this new land this fall either, which is also a bit of a bummer.

Here's what you can wear inside Star Wars: Galaxy's Edge 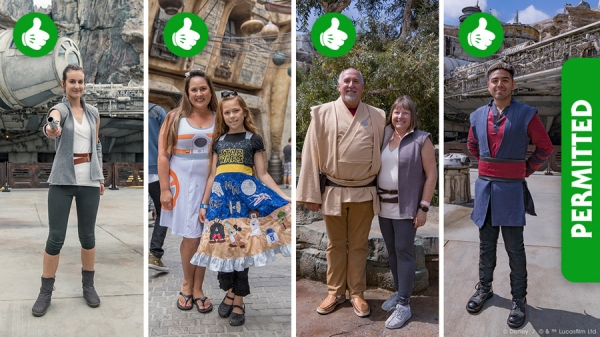 Though guests won't be able to wear costumes at all inside Star Wars: Galaxy's Edge at Disneyland, the park has re-confirmed that guests who want to display their love for all things Star Wars can dress in "DisneyBounding" outfits inspired by a Galaxy Far, Far Away. That includes character t-shirts, and dresses by designers like Her Universe. The DisneyBounding rules are pretty flexible (as you can see with the "Rey" DisneyBound above) so as long as you aren't wearing any kind of hard plastic and your outfit would be passable in a grocery store, you're probably good to go.

Right now these rules are only in effect at Disneyland, but we can't help but wonder if they will transfer over to Disney's Hollywood Studios later this summer...

Do they or should I say "Maybe double standards?" Wdw is offering a full experience for weekly package. This will consist of role playing right down to the garb. Now that would be a shame if Disney let's you "Pay to Play" but not let you spend your hard earned money for a 1 day hotel,food,ticket experience for the day. I guess the 3,700.00 Role playing package to wear a custome comes with a price tag. Just Google (Galaxy's Edge hotel and role playing experience).