Last month, as part of the sweeping security changes that hit Disney parks in both Orlando and California, costumes were outright banned for adults over 14. Though this isn't much of a change from regular park procedure (adult costumes have always been banned at Walt Disney World during normal park operation), many have been wondering what this new policy could mean for those annual events which historically encourage costuming, like Mickey’s Not-so-Scary Halloween Party and runDisney races.

While we still don’t have any information on what's happening with the Halloween Party, runDisney is hosting its annual Walt Disney World marathon this weekend, and has gone ahead and clarified what is allowed and what isn’t at runDisney events under these new regulations. 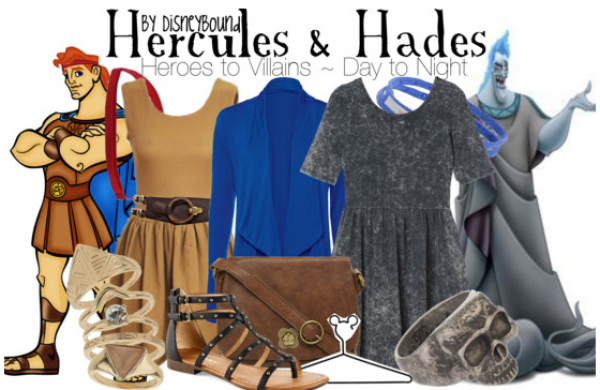 As mentioned previously, Disney parks have never allowed guests 14 and older to wear costumes at any parks during regular hours. However, many Disney guests have skirted around this issue by “DisneyBounding”, which is essentially wearing regular clothes that look like something a “real life” Disney character would wear. So for instance, a DisneyBounder trying to recall Minnie Mouse’s style might wear a red dress and yellow heels, while a Little Mermaid DisneyBounder might wear a purple shirt and green pants. Both of these outfits recall their respective characters, but could pass as just plain street clothes as well. If you’re curious about what constitutes Disneybounding (and why guests love to do it) we suggest further reading here.

Though some of the verbiage in Disney’s original statement about the banning of costumes gave DisneyBounders cause for worry, it looks like themed clothes are officially OK, at least at runDisney events. Unofficially, several DisneyBounders have reported that they have not been kicked out of Disney Parks for dressing in a manner that recalls (but not copies) their favorite character as well, so it looks like guests planning to DisneyBound at the runDisney marathon happening this weekend can feel confident wearing their Disney-inpired outfits (not costumes) both during and after the race.

2. Layers are off limits 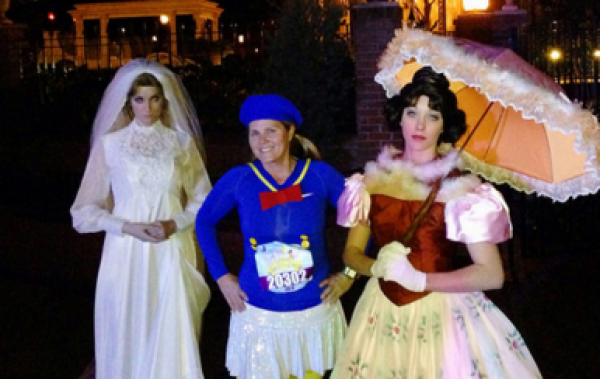 Even though wearing street clothes that look like Disney characters is OK, it looks like anything that has multiple parts or is layered in any way is not allowed under the new rules. Disney’s official statement on the matter singles out Jedi Robes as something that would not be allowed under the new policy, but there are plenty of other characters whose costumes wouldn’t work under this new policy including the Fairy Godmother from Cinderella. If your costume seems iffy, it would be best to err on the side of caution, as Disney will be turning away participants with layered clothing that could potentially conceal something. 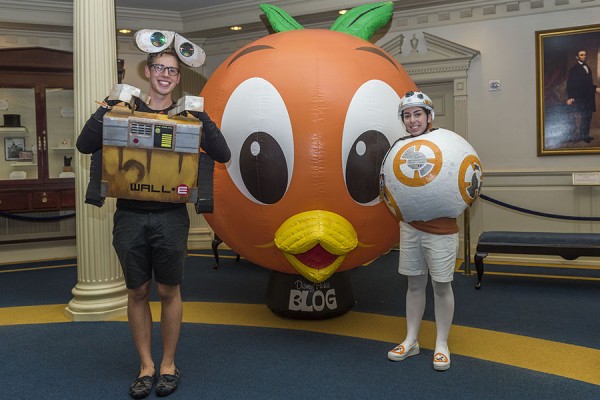 Additionally, if your costume covers your entire body, it is not OK under the new Disney costume guidelines. Practically, that means no floor-length dresses (sorry princess fans) or giant costumes. Floor length capes are not permitted under the new rules either, although Disney does specify that short capes are fine.

The guideline update also forbids guests from using props as full body costumes (as seen above). Disney specifically mentions props like a “wearable” Death Star and the house from Up as wearable props that are not allowed, but the implication here is that really anything that covers your whole body and looks like it could conceal something simply isn't allowed.

American Geode goes every year and we usually wear vintage Disney fluroescent shirts and long board shorts from the late 80s and early 90s. They are very ugly outfits but everyone laughs and has a good time. This year we are also wearing Mickey suspenders over the t-shirt.

Please give me an opinion : My BFF and I live far apart, and never get to see each other. We have been planning our Halloween trip for TEN YEARS, and now its coming true! I am a girl, and a big Jack Sparrow fan. I would like to wear : Black knee length cargo pants, a pirate blouse that could pass for street wear, ballet slippers, long red scarf to hold back my hair, and some assorted piratey little jewelry. it will be the day before and day of Halloween. Its a fine line between Disneybounding, and almost a costume, quite reminiscent of Jack. A very toned down version of the makeup ( read that : lots of eye makeup, but otherwise regular, no beard, and no wig. ) I bought it all at real stores, no costume company. Do you think I can do it? And if not in the parks, is it okay around resorts? Thanks so much, I hope the answer is "okay!"

I think you're okay with this. keep the face make-up tone down, not too theatrical looking. But you're right it sounds like it may be right on the edge of Disney bounding. It's all going to come down to the castmember at the gate. With a straight face you're going to have to be able to say to that cast member "I have no idea what you're talking about these are my everyday street clothes". As far as non Park parts of the property I think you're fine with places like Disney Springs and any of the Resort's. You could probably even go with the heavier theatrical face makeup in those areas. I hope you and your bff have a good time. Hope to see you there. We will be there September 16th Thru the 25th 2016.

The layers thing is TOTAL misinterpretation! It just says layers are subject to search.

Also, I forgot to say I'm confused by the layering rule. I've never done the runDisney events; I go to the parks for regular admission so maybe I don't understand but I layer my clothes all the time! I usually wear a skirt or sundress (this year I'm going to Disney bound as Anna, wearing a sunflower border skirt) with capris or leggings underneath, and a shirt and cardigan over that, based on temperatures. I add and subtract these layers throughout the day based on my comfort level. Are they saying I can't wear more than a single layer at a time? Or does that just apply to running shorts with capes and tutus for running events?