Turning Point: An Iconic Piece of Disneyland is Lost Forever to a Galaxy Far, Far Away... 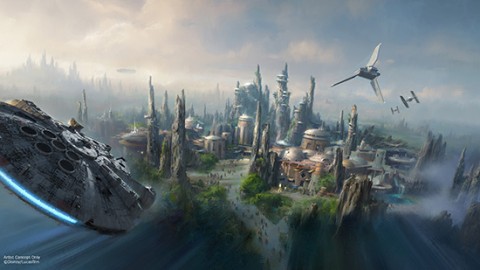 "Disneyland will never be completed. It will continue to grow as long as there is imagination left in the world." – Walt Disney

The problem with progress is that it oftentimes comes at the expense of something that was historically great, something whose moment in the sun has passed. In the case of Disneyland, a child who visited the park in its first year in 1955 is in their 70s or 80s now. What they remember from their youth is oddly accurate in some instances.

Part of the prescience of Walt Disney was that many of the attractions he helmed during the early 1950s remain popular to this day. On the other hand, some of those mid-20th century ideas felt dated after a time, so Disney eliminated them.  Lately, the biggest story at the Happiest Place on Earth involves a blending of the two premises. Disney is trying to plus the world’s oldest theme park by introducing something new. In the process, they’re ditching a part of something that hearkens all the way back to Disneyland’s opening day. It’s a delicate balance that underscores the challenges of modernizing a park with such a lingering legacy.

In this edition of Turning Point, I’ll discuss the history of Rivers of America at Disneyland, focusing on its iconic status and importance in Disney history. Then, I’ll evaluate the significance of draining the water and changing the boat path in order to make room for Star Wars Land. 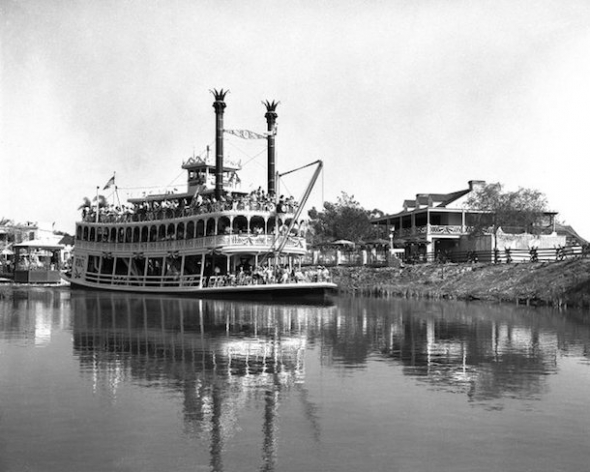 This story begins in Marceline, Missouri. The city wasn’t Walt Disney’s first home – that was Chicago, Illinois – nor was it a place he lived throughout his childhood. After only five years of residence, the Disney family packed up and moved to Kansas City, Missouri. From the time that he was four to nine, however, the early formative years of his life, Disney’s life intersected with the stories of Mark Twain. He was raised in the days of glorious riverboats sailing on the Missouri River.

Those childhood memories lingered ever after the illustrator became one of the world’s most famous celebrities. When Walt Disney prepared to build his theme park in Anaheim, California, he had only three definite attractions on his shortlist: a haunted house, a train, and riverboat. While the haunted house would take more time, the train and the steamboat were ready when Disneyland opened its gates for the first time.

To Walt Disney, the steamboat and the train were relics of a past that he loved, ones that he could recreate for his guests. They could enjoy a visit to a themed land from a simpler time before Tomorrowland revealed the marvels of the future. Legend has it that Uncle Walt was so passionate about building the Mark Twain riverboat that he sold his dream home to finance it. He felt the need to display a part of his upbringing to guests visiting Disneyland from faraway lands. 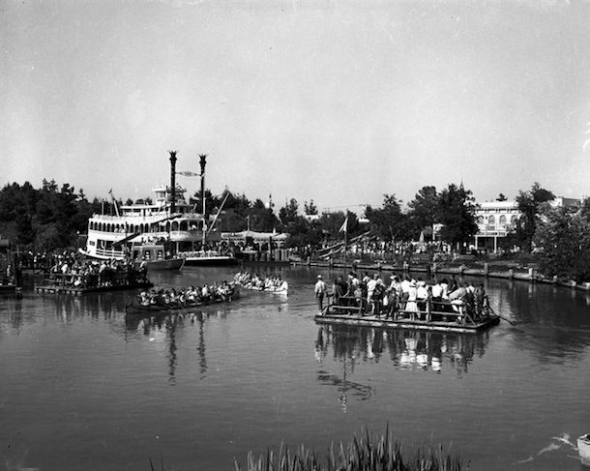 A financial aspect also crystallized his thinking. As I’ve mentioned before, the Davy Crockett mini-series that Disney released in December of 1954 quickly became a cultural phenomenon. This serendipitous ascendance occurred during the construction of Disneyland. Ever the businessman, Disney recognized the mass appeal for the frontier life that he planned to recreate. That led to a doubling (well, quadrupling) down of the plans for Rivers of America. After the riverboat attraction began on opening day in 1955, they’d quickly add the Mike Fink Keel Boats later that year, the Davy Crockett Explorer Canoes (with a decidedly less PC name) in 1956 and then the Sailing Ship Columbia in 1958. Disney wound up getting four attractions out of an artificial waterway.

The recreation of steamboat living is a key visual of the Frontierland area. Disney explicitly uses the plural Rivers of America to show that this waterway embodies an entire way of life. It’s not any one river but rather a meshing of The Columbia, the Mississippi, the Potomac, and the Rio Grande. They represent distinct geographical regions of America (southwest, northwest, etc.), and the themed design included markers so that the ride would know which of the four legs they were currently sailing through on their journey.

Alas, nature got in the way of those original plans over time. The water basin and surrounding vegetation caused some of the signifiers to disappear gradually, an issue Disney addressed multiple times over the decades. Their attempts to provide definition to the various points along the Rivers of America were always a lost battle since nature would take its course. As much as Disney has tried to stay true to Uncle Walt’s vision for the Rivers of America, it’s a fight they just can’t win. And their metaphorical battle with time now exists on two fronts…