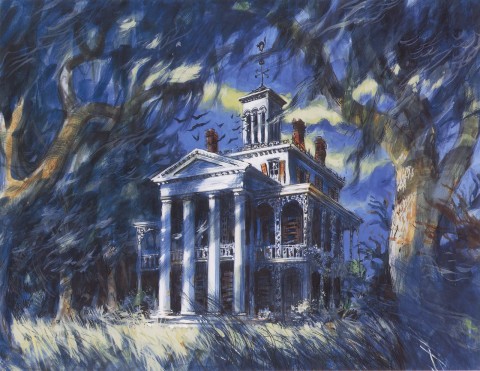 “Welcome, foolish mortals, to the Haunted Mansion. I am your host, your GHOST HOST. Kindly step all the way in, please, and make room for everyone. There's no turning back now.” Next, please step into the Doom Buggy.  “The carriage that will carry you into the moldering sanctum of the spirit world will accommodate you and one or two...loved ones. Kindly watch your step as you board, please.”  Now that you’re seated, this tour of the history of one of Disney’s most storied theme park attractions will begin.

Any true Disney fans reading the above heard the same disembodied voice in their heads, because that’s the power and the allure of the Haunted Mansion, a celebration of the macabre that pays tribute to classic haunted houses of old while delivering twisted humor that remains funny today. This dark ride is unquestionably the most novel of the signature attractions at Disney, a gothic palace of horrors that somehow pecks at your funny bone. It’s an odd amalgam of competing points of view thrown together almost haphazardly, and its story remains compelling to this day. 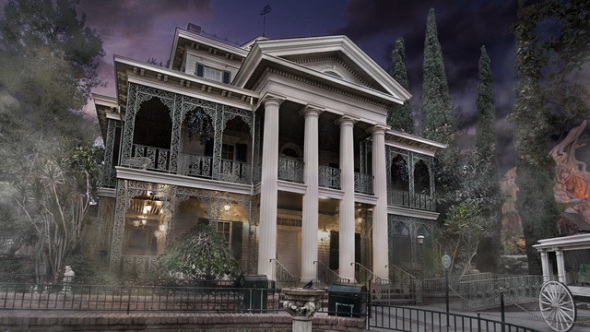 In 1969, Disneyland’s Haunted Mansion finally debuted, 14 years after Disneyland first hosted guests. While the Haunted Mansion is intimately linked with Disney theme parks across the world, few people realize the gap between its inception and its actual public introduction. That gap represents one of the strangest, most contested internal struggles Disney’s Imagineers ever experienced. And the key to the whole affair comes down to a simple question. Should a Haunted House at a Disney theme park be funny or scary? As you know, the answer its designers eventually chose was both, and the ride is so much the better for it.

That wasn’t the original plan, though. Walt Disney himself demanded the creation of the Haunted Mansion, and his influence persists throughout several iterations of innovations at both of the company’s American theme parks. There are even variations on the theme overseas at Disneyland Paris, Tokyo Disneyland and, most recently, Hong Kong Disneyland, where it was reinvented as Mystic Manor. The ride’s evolution from conception to current styles of design underscores all the changes Disney requires to maintain supremacy as the best theme park company in the world.

How did a series of parks designed to please small children wind up showcasing a malevolent home of tormented spirits? To understand the answer, you’ll have to learn the history of one of the most troubled attractions of Disneyland, one that predated the existence of the park itself yet didn’t open until 14 years afterward. Are you prepared to read the shocking history of the Haunted Mansion? If so, step inside and prepare yourself for a ride of gothic terror. Remember that there is a limit of three mortals per Doom Buggy. I will be your Ghost Host, narrating the history of Disney’s darkest of dark rides.

A ride before Its time 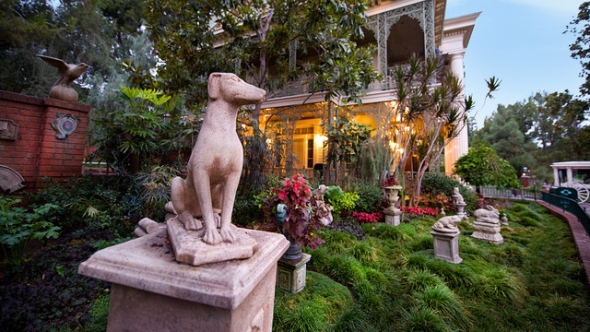 Let me tell you of the early days of my humble abode as well as how I, the Ghost Host, came to reside at the Happiest Place on Earth. You see, foolish mortals, back in the days when there was no such thing as Disneyland but only blueprints for an idea known as Mickey Mouse Park, the kernel of inspiration for Haunted Mansion already existed. In its original conception, its name was a bit too on-the-nose. Walt Disney and his Imagineers called it Church, Graveyard and Haunted House, and their plan for it was to celebrate the classic Haunted House attractions that were already well-established by the early 1950s.

The idea of a theme park without a Haunted House (and Church…and Graveyard) felt inconceivable to everyone involved with the creation of what would become the Happiest Place on Earth. To wit, Disney himself revealed that his first plans for the Haunted Mansion began 20 years prior to the park’s opening. Despite the universal support for the premise, when Disneyland opened its gates for the first time in 1955, there was no spooky house drawing the attention of visitors as they strolled through New Orleans Square.

In fact, there was no New Orleans Square. Most people naturally assume that this themed land has resided in Disneyland since the beginning, but that isn’t the case at all. New Orleans Square became the first ever Disney theme park expansion when it debuted in 1966, and, amazingly, Haunted Mansion wasn’t open to the public at that point. For that matter, it wasn’t even a sure thing at the time, because warring factions within the ranks of Disney’s Imagineers spent a great deal of this time battling over the substance of the attraction. As they locked horns in a constant debate about the destiny of Haunted Mansion, Walt Disney himself began to suffer from the effects of cancer and eventually died in December of 1966. In his absence, the brand new New Orleans Square expansion suffered a void due to the lack of its anticipated anchor Doom Buggy ride, the one for which the company had passed out advertising flyers…in 1961. 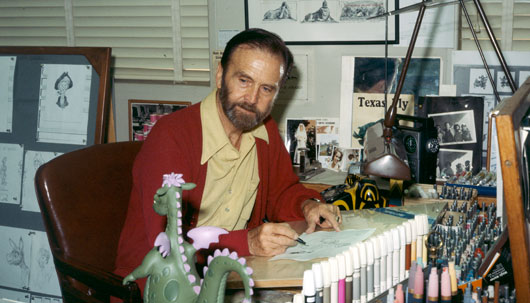 You foolish mortals are presumably wondering whose poison pen drew the gruesome blueprints for my pernicious plantation. Those of you who are longtime Disney followers are likely familiar with the work of Ken Anderson, an animator and writer whom the company honored in 1991 with the Disney Legends award for Animation & Imagineering. Like so many of the employees who worked side by side with Walt Disney himself, Anderson was a renaissance man at the company. He had a hand in classics such as Cinderella, Jungle Book, and Aristocats, all of which he wrote. He also sketched drawings that would become the unofficial blueprints for eventual rides and attractions at Disneyland. 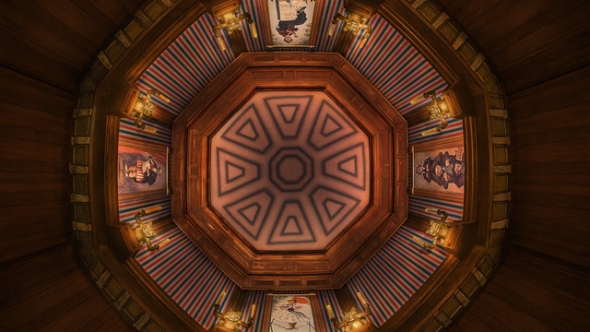 Most notable of those is Haunted Mansion, which Walt Disney personally assigned Anderson in 1957. Disney wanted the attraction prioritized, because he felt the park was lacking without it. In many ways, Anderson was perfect as the driving force behind the Haunted Mansion. He wasn’t an animator by intention but rather an architect who wound up working at Walt Disney Studios starting in 1934. Over time, he perfected his craft as an illustrator and content creator.

By the time Walt Disney tapped him on the shoulder and suggested he draw mock-ups for the ride and surrounding area, Anderson possessed a combination of architectural understanding of building design and animator’s knowledge of how to tell a story through visuals. The dutiful employee had only recently transferred to Walt Disney Imagineering (WED) from the animation department, so he had one foot in both phases of business development. Equal parts showman and pragmatist, Anderson began accumulating spirits for the enterprise that would eventually spawn spooks like me. 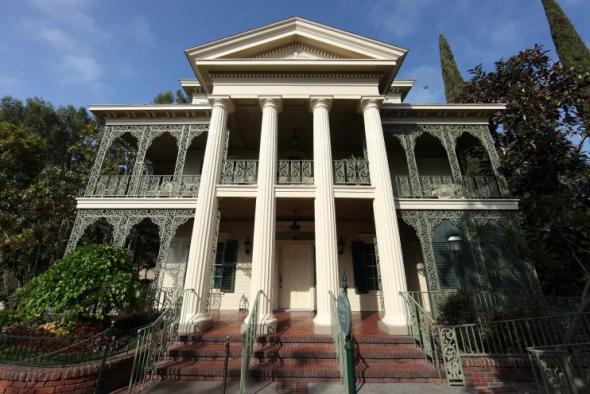 Anderson’s attention to detail was on full display when he selected a property as a guideline for his artistic renderings. He chose a building that was already over 150 years old, the Shipley-Lydecker
in Baltimore, Maryland, as his odd inspiration for an antebellum New Orleans plantation-style mansion. While he explicitly modeled the look from it, he adopted some of the style from the Winchester Mystery House in San Jose, California. It was symbolically fitting as the residence of the widow of gun-making legend William Wirt Winchester. Sarah Winchester herself claimed that the ghosts of all the people killed with Winchester weapons haunted her home, so the duo’s residence fit the broad strokes outline Anderson had for Haunted Mansion.

The Imagineer visited the popular tourist attraction, which remains in operation to this day. He took meticulous notes about not just the housing details but also the operation of the business. They influenced many of his architectural decisions, as his intention was to create an attraction that could host a lot of people in a single day. In order to achieve that goal, he’d want Haunted Mansion to set new standards in the genre. The Winchester Mystery House includes a treasure trove of obscure arcana and oddities such as doors to nowhere, stairs whose path is a circle, and a Séance Room. All of these ideas eventually wound up as features in my ghastly home.

I enjoyed reading this article. Very interesting to learn how it all came to be, and where the inspiration was drawn from.

This ride really brings me back. I remember riding in the buggy with my dad back when we all went, my aunt and her best friend, also. My dad used to get the tickets through the Southern California Gas Company he worked at for years. My dad being the joker he is. Reached out and knocked on my uncle and mom’s buggee, which was ahead of ours. Lol! Wish the tickets were still as affordable as they were in the good ole days.