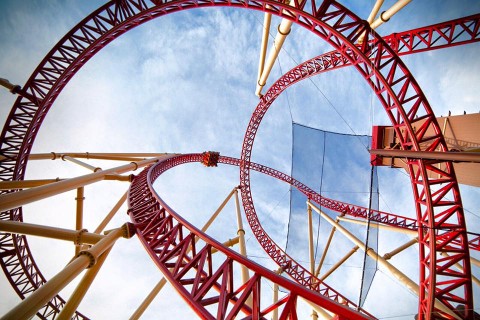 Welcome to the first stop of our series, “Would You Ride…” where we find some of the world’s craziest roller coasters and beg the question, would you ride these coasters? There are many crazy coasters out there, but this time we are examining some of the United States' most unique coasters. The five coasters we are going to talk about are all unique in their own way. They have features that not only set them apart from other coasters but make for some insane rides. Would you ride these five crazy unique coasters?

X2, originally opened as X in 2002 at Six Flags Magic Mountain. The coaster was the very first 4-dimensional roller coaster. This coaster is truly something else. It features winged trains with seats that can rotate 360 degrees. So not only are you soaring through the 3,610 feet of track and reaching speeds of 76 mph, but you are also somersaulting through the whole thing.

You first ascend a lift hill, backwards up to the 200 ft tall vertical drop. All the while, you will be listening to music and other audio effects. Not only that, but this coaster also had pyrotechnic effects. That’s right, there’s fire. As mentioned, the coaster originally opened as X, but closed in 2008 for a several months long, 10-million-dollar refurbishment that included a new restraint system, a new color scheme, updated audio and visual effects, and new trains that cause less wear. The coaster also increased its capacity by 50 percent. This coaster was the first of its kind and is still one of the craziest coasters in the United States.

You may not have heard of Lagoon in Farmington, UT, but this small amusement park is home to one of the craziest, unique coasters: Cannibal. Cannibal opened in July of 2015, and cost about 22 million dollars. In a time when most builds are outsourced to other companies, almost 75% of Cannibal was designed in-house by Lagoon.

The 2,735 ft long coaster features 3 inversions including a 140 ft tall, inverted loop and the first “Lagoon Roll” which is a counterclockwise heartline roll immediately followed by a clockwise heartline roll. Did we mention there are only lap-bar restraints holding you in? You first climb a dark elevator lift up a 208 ft tower before descending ever so slowly over the edge of the 116° drop down into an underground tunnel. Riders will reach speeds of 70 mph on this coaster, and experience 4.2 g-forces. There is even a water feature. This coaster makes this small park a definite must-stop if you are looking for an incredible roller coaster experience.

No list of crazy, unique roller coasters would be complete without Hagrid’s Magical Creatures Motorbike Adventure at Universal’s Islands of Adventure. This coaster is the most expensive roller coaster ever built, coming in at a whopping 300 million dollars. The coaster opened in June of 2019 and saw 10 hour-long wait times to ride it. During this themed coaster, you will fly over 5,053 ft of track through the Forbidden Forest on innovative motorbike and sidecar trains.

The motorbikes will whip and zoom through incredible set pieces including Fluffy, a Unicorn and her baby, and even an animatronic of Hagrid himself. But what else makes this coaster crazy and unique? Well, not only does it have 7 launches (the most of any in the world), but it also includes a 17 ft free fall. Yes, the whole train plummets straight down during one portion of the ride. In addition to these features, guests will also be sent up a 65 ft tall spike at a 70° angle only to be sent plummeting down, backwards. Throughout the nearly 3 minute long ride, you will listen to thrilling music and narration from Hagrid. It is long, it is impeccably themed, and it has twists and thrills you won’t see coming.

We now head back to Six Flags Magic Mountain...