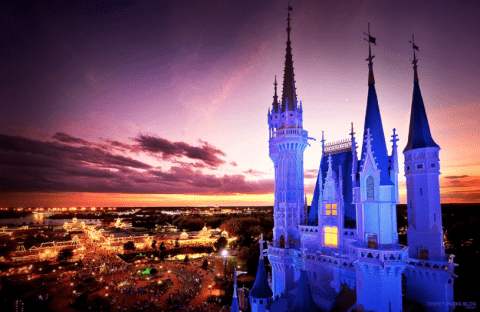 Is there magic in the stars?

Whether or not you lend any credence to astrology – the practice of divining information about human matters from the patterns and movements of celestial objects – there's one compelling connection none of us can deny: Twelve Disney Parks. Twelve signs of the Zodiac. With that idea in mind, I reached out to a lifelong friend, writer, Language Arts teacher (and personal Dr. Facilier), Ethan Thomas.

I sat down with Ethan for a really-for-real lesson on Astrology 101, determined to rise above "What kind of noodle are you based on your Zodiac sign" Buzzfeed quizzes to decide which Disney theme park best fits with each of the twelve signs. (Full disclosure, this is a friend who took my story about Disney’s decades-long inability to adapt Hans Christian Andersen’s Snow Queen into a workable film as a personal challenge and responded by writing a novel: Glass in the Snow, a free-to-read adaptation of the legend mixing in Norse mythology and rising to the challenge...)

Much to our surprise, pairing parks with the stars worked out pretty effortlessly! Somehow, each Disney Park’s “personality” seemed to slot intuitively into a corresponding sign… (Keep in mind, direct from Ethan, that the signs we typically associate with ourselves are our “sun signs” – technically, they show us not who we are, but who we are on the way to becoming…) Is this clear complementary relationship a product of divine intervention? We’ll let you decide… But trust us when we say that – whether you “believe” or not – looking at the parks through this lens may change the way you see their personalities, quirks, and relationships to one another…

By their nature, fire signs are high-energy. Parks we’d classify within this element tend to think mythologically, as if everything is part of a grand story. They can be temperamental, unpredictable, and volatile, with surprise announcements you don't see coming. But is that a bad thing? After all, it means that fire signs are not afraid of chaos. They love and embrace change and hate boredom. At the end of the day, “Fire” parks are defined by evolution, and committed to the next hot thing. Which parks do you have in mind for this?

Aries is the youngest sign of the Zodiac, and a high-energy fire sign at that. As a result, it’s the sign of new beginnings; yearning for a sense of adventure, action, and movement with a cause to fight for. An Aries can be impatient, energetic, and easily bored. They’re always on the move, but hold no grudges about past slights. Frankly, Aries can be surprisingly unaware of others’ opinions at all! Like a hero and their "I Want" song gearing up for adventure, Aries is ready to hit the road and make things happen.

Altogether, an Aries is defined by their need for a goal to reach for.

That makes this one a pretty easy fit. It must be Hong Kong Disneyland. Despite not being the newest Disney Park, it somehow feels like the youngest; it’s a park that’s warm-hearted and generous, but childish and still learning. And as a park literally defined by never-ending growth spurts and reimaginings to right past wrongs, it’s the perfect icon of the start of the Zodiac; a fresh, young park still finding its footing, but burning bright as it does. The park perpetually keeps a goal on the horizon and moves steadily toward it.

The sign Leo is ruled by the sun… and not surprisingly, Leos act like they’re the center of the universe. Despite their bravado and bluster, Leos really aren’t as confident as they appear, and in fact many Leos judge their importance by whether or not other people see them as important. They maintain a fiery idealism and extraordinary extravagance. Their goal is to be as big and as grand as possible without worrying about the bills. Leos are horizon-chasers who must learn along the way that the real quest may be an inner one...

A Leo needs to feel that they’ve left a legacy.

Yep, it must be Shanghai Disneyland. The youngest Disney Park on Earth retains the unpredictability and perpetual motion of fire signs, but unlike the young and impetuous Hong Kong Disneyland with its goal to fight for, there’s a sturdiness, grandness, and pride to Shanghai Disneyland; a self-bestowed status as a “new icon” of the next generation of Disney Parks. Truly built with a seemingly bottomless budget, this park is one of intentional extravagance and self-importance – the living symbol of a Leo.

Rounding out the fire signs in the most mature of the three is Sagittarius, the archer. Your textbook Sagittarius likes to shoot an arrow toward the horizon and chase it. Rounding out the fiery zeal and commitment to the “next hot thing” exemplified by fire, Sagittarius revels in the journey; constantly moving, constantly getting what they want… and constantly growing tired of it. Sagittarius is stricken by “FOMO” (fear of missing out) and thus is always changing shape and reinventing.

Most tellingly, a Sagittarius has a grand vision that can never fully manifest.

Congratulations Sagittarius sun signs… you are best represented by Disney California Adventure. This is a park whose journey has become legendary (literally… we wrote about it in an in-depth special feature tracking the park’s original form, and its era(s) of rebirth). After successfully undoing the park’s flat, comical, satirical opening day tone, Imagineers recast California Adventure as a built-out, romantic, idealized park perfectly complementing Disneyland. But it’s never enough. The continued evolution of the park since (axing its Californian anchor attractions in favor of Marvel and Pixar) is Sagittarius incarnate: the journey never ends, and the vision never fully materializes between reinventions.