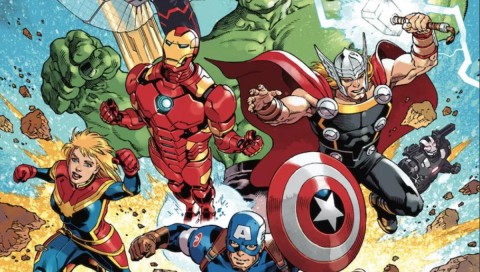 “Avengers… assemble?” Disney Imagineering fans wish it were that easy.

Forget Loki. Ultron. Thanos. When it comes to superheroes, one of the biggest battles of all time rages on with no end in sight… it’s the war between Disney and Universal, two powerhouse entertainment titans already engaged in a decades-long fight for Orlando, now embroiled in a custody battle over a teenager from Brooklyn... with web-slinging powers.

It’s one of the most unusual stories in theme park history – that Universal Orlando somehow acquired the rights to build attractions based on Marvel heroes, and that that pesky agreement remains in place even given Disney’s purchase of Marvel in 2009… But how, exactly, can Disney still not win back the theme park rights to their own $22 billion box office behemoth from their biggest competitors? What explains the slow drip of some Marvel heroes into Disney Parks, but not others? Will Walt Disney World ever open an immersive land dedicated to Wakanda, Asgard, or even an Avengers Campus?

17-year old Stanley Leiber was indeed part of Timely Comics back in 1939... but he'd recall to the LA Times, "In those days [the artists] dipped the pen in ink, [so] I had to make sure the inkwells were filled. I went down and got them their lunch, I did proofreading, I erased the pencils from the finished pages for them." All of that changed by 1961, when "Stan Lee" and iconic comic artist and innovator Jack Kirby co-created a superhero team called the Fantastic Four. The very next year, they co-created Marvel's most well-known hero, Spider-Man.

And unlike the comics that preceeded them, Lee imbued his heroes with adult problems; flaws; connections to pop culture and real world events. Though Jack Kirby would leave Marvel for rival DC Comics in 1970, Stan Lee would remain with Marvel, leading it from a small division of a national publisher into an entertainment media giant in its own right.

Unfortunately, Marvel's story wasn't all wins. The 1990s were a particularly brutal time for comic books. After a steep rise in sales thanks to the emerging promise of collectability in 1990, Marvel was dealt a painful blow in 1992 when seven of its most prominent artists left en masse to form Image Comics. As the company's finances sank through the '90s, they sought out opportunities to leverage their catalogue of characters in new ways. Keep in mind, before the superhero boom to come, many of Marvel's heroes were on the outskirts of pop culture, not dominating forces in media.

So Marvel would famously enter into a host of licensing agreements, essentially renting out their backlog of characters to movie studios in (today, frustratingly) ironclad agreements in order to make some quick cash. It's the reason for 1997's Men in Black (through Universal), 1998's Blade (via New Line), 1999's X-Men (a Fox film), and 2002's Spider-Man (a Sony Pictures release). But Marvel also saw an opportunity to increase its relevence and esteem by way of something big happening in Orlando...

Marvel's fall from grace couldn't have happened at a better time for MCA Inc., then-long-time owners of Universal Studios. After the relative success of their Universal Studios Florida theme park in 1990, MCA was already hard at work developing ideas for a second park to be built on their Orlando property. And this time, MCA was eager to make in-roads toward Disney's core audience with a new theme park concept they called Cartoon World.

Even from its earliest concepts, Cartoon World would be an unusual, new kind of theme park in that it would rely almost entirely on intellectual properties, and most of those IPs would be licensed by Universal, not owned. In fact, MCA was in negotiations with other studios and publishers in hopes of assembling an all-star catalogue of cartoon characters around which this new kind of park would take shape. In particular, early drafts of Cartoon World called for the park to feature themed lands dedicated to the works of Dr. Seuss and Jay Ward Productions (Rocky & Bullwinkle, Dudley Do-Right, George of the Jungle, and more).

But a unique agreement with Warner Bros. would also allow two lands based on DC Comics (a Superman-themed Metropolis and a Batman-themed Gotham City) and another based on the beloved Looney Tunes.

A few disagreements between MCA and Warner Bros. ultimately dashed the relationship (which is why both DC Comics and Looney Tunes made their way to Six Flags). Luckily for Universal, DC's exit aligned with Marvel's decline. Just as they happily licensed their catalogue of characters out to movie studios for film adaptations, Marvel executives were happy to license out their backlog of characters to replace DC's in Universal's second Orlando park. On March 22, 1994, a deal was struck. Universal would gain the rights to use Marvel's catalogue in their new Floridian second gate. What were the rules governing their use of the characters? This is where things get interesting.

What did it take to secure the exclusive rights to use Marvel superheroes at Universal? Thanks to the U.S. S.E.C., we can find out. The actual agreement between MCA and Marvel is relatively brief, and surprisingly airtight. It reads:

As part of THE SECOND GATE, within a separate environment designated under the banner of THE MARVEL UNIVERSE (or similar designation approved by Marvel) MCA will construct a complex of attractions, stores and food venues heavily themed around the Marvel properties. Marvel hereby grants MCA a license to use Marvel’s characters for the purposes, on the terms and to the extent set forth herein.

Among the stipulations put forth by the agreement:

Naturally, the agreement also includes a one-time payout from MCA to Marvel in exchange for the exclusive relationship as well as an ongoing, named annual fee for licensing, a minimum square footage of Marvel retail space (including at LAX and MCO), and annual guaranteed merchandise advance followed by a percentage cut of any Marvel products or any retail or dining products sold at premium pricing “from Marvel themed facilities or which carry Marvel logos or proprietary elements.”

What would MCA receive in exchange? This is where the spiderweb gets sticky… Read on...

Any speculation or rumors regarding marvel expansion at Universal's Epic Universe? I'd be super interested to know more about what universal can still explore and expand upon with Disney owning Marvel now.

This article is the latest information we have on Universal's Epic Universe, https://www.themeparktourist.com/news/20191202/28436/4-amazing-projects-now-works-universal-orlando-resort?page=2
I hope you enjoy the read!