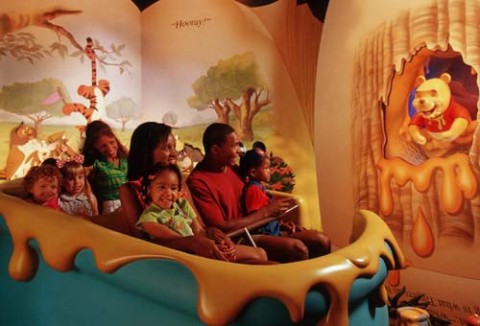 Disney theme parks combine beloved attractions from yesteryear with cutting-edge rides. At the turn of the 20th century, the Disney Decade had petered out, leaving management with tough decisions caused by a financial crunch. Despite the challenges, Disney’s North American parks added a dozen rides, most of which have stood the test of time. Here are the best Disney rides of the 2000s (2000-2009).

9. Many Adventures of Winnie the Pooh

With so many employees working on this project and the opening of Hong Kong Disneyland, Michael Eisner didn’t do a great job in managing the output. Somehow, Imagineers overcame this impediment and still managed to craft several memorable attractions.

A prime example is Many Adventures of Winnie the Pooh, a stellar dark ride that’s still justifiably viewed as inferior. Pooh’s Hunny Hunt tells a similar story much more effectively thanks to its daring use of trackless ride technology. Still, any visit to Hundred Acre Word will soothe the soul. On this attraction, the pages come to life as you meet all of Winnie the Pooh’s friend. It’s a gentle hug of a ride.

No other attraction listed here as received as many cosmetic changes as the current Pixar Pal-A-Round. When it started in 2001, the eccentric wheel that’s not quite a Ferris wheel mirrored Disney California Adventure’s theme. Once that idea failed, Mickey Mouse became the star before the Pal-A-Round attained its (hopefully) final form.

Still, the song has remained the same. It’s a giant wheel that spins guests high enough that they can view all the landmarks on the Disneyland Resort campus. While this ride isn’t for people with a fear of heights, the enhanced Ferris wheel style will delight anyone who likes gondola spins.

The variations of this attraction populate most Disney theme parks around the world. Disney builds them since they’re so simple to duplicate. All versions of Buzz Lightyear, even the Marvel-themed one at Hong Kong Disneyland, employ the same style.

You’re playing a laser tag kind of game wherein you point your laser gun at targets and fire. Technically, you’re acquiring batteries to prevent Emperor Zurg from achieving his (latest) evil plan. But what you’re really doing is trying to humiliate the person sharing the ride cart with you. The attraction keeps score of your success rate, and that gamified element explains why Buzz Lightyear rides maintain popularity to this day.