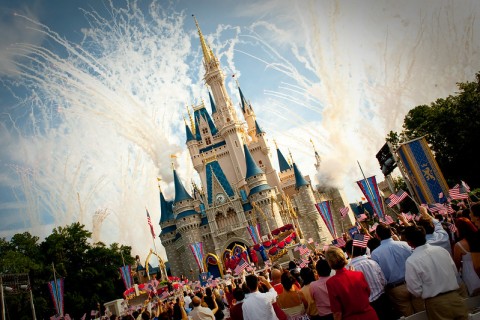 There are some forces in this world that we are powerless to stop. Gravity, for instance — or the weather. One such force is, of course, the need to take certain photographs at Walt Disney World.

It doesn’t matter that it’s one of the most photographed locations on planet earth, nor does it matter that many of the pictures you take have also been taken by thousands of people before you. Having a camera out and snapping photos is part of the magic when you’re at Walt Disney World — in part because it’s such a rich environment, and in part because it’s fun to play the, “Yes, I was really there” game.

Here are a handful of photos that have become something of a cliche in the theme park world, but which you will take no matter what. They are too fun not to.

Yes, everyone takes a straight-on picture of Spaceship Earth — its glorious geodesic sphere superstructure soaring into the sky above Epcot. But, there’s another photo of the iconic figure that has become even more ubiquitous. That is, the abstracted version of Spaceship Earth, shot from below with the blue sky as the background.

Both this shot, and its sibling — the nighttime edition with the beautiful lighting effects and a black night sky — have a kind of clever mischief to them. They are just different enough from the usual head-on shot that they feel more unique and personal — something everyone wants from their vacation photos. But, it’s still the most photographed object in the theme park, and it’s not such an original idea.

The result is a gorgeous composition contrasting the simple beauty of the natural sky and the complex engineering of humanity. And, as an added bonus, it makes a great phone wallpaper.

When does your vacation to Walt Disney World officially begin? Is it when you disembark your flight at Orlando International Airport? Is it when you leave your house? Is it the first glimpse of Cinderella Castle?

Or, is it when you first pass beneath the main entry gate to Walt Disney World itself — complete with the iconic sign?

It is against Disney rules to slow down or stop to take a picture with the sign, but that doesn’t stop energized guests from snapping pics as they cruise on the highway beneath it. For that reason, it’s important for guests driving their own cars to remain alert — everyone in the area is distracted.

The photos themselves rarely turn out well, but that’s beside the point. It’s the official start to the trip: You have to take a picture to commemorate it.

Looking Up at the Millennium Falcon

The newest entry to the iconic Disney photo repertoire, the Millennium Falcon is something that millions of people have long dreamt of seeing in person. Disney’s imagineers gave them the privilege of seeing just that when Star Wars: Galaxy’s Edge finally opened to the public — and the result is every bit as astonishing as we all imagined it would be.

The key to this photo is, of course, the scale. Everything Disney has included in the frame reinforces the notion that this is the real Millennium Falcon. It is the right size, it is the right shape, we are the right distance away from it. And, the angle also helps remove the pesky fence keeping guests away from the actual facade of the Falcon.

This photo op is new, yes, but it has already become the Instagram humblebrag for a new generation of Disney Parks fans.