Despite my German heritage, I have no idea what Freizeitpark Plohn means, just that the park is the pride of Legenfeld, Germany. I DO know that this place once featured a cleverly themed mine coaster that has since been repurposed. The new version of the attraction, Dynamite, is a slick steel coaster that’s the park’s most expensive ride ever. Capable of speeds of 62 miles per hour, Dynamite has completely dropped all on-ride theming in favor of pure adrenaline.

Something you’ll appreciate as you read this list is the way that European and Asian parks are stepping up with their theme park technology, no longer content to take a back seat to their North American peers. China is ascendant due to the massive amount of money flowing into the theme park industry today.

Wuxi Sunac Land in the Jiangsu province opened on July 1st and instantly wowed observers with Falcon, a high-voltage coaster that goes 72 miles per hour across almost 4,200 feet of track. And, oh yes, it’s a wing-coaster!

The Wizarding World of Harry Potter isn’t the only theme park where you can pretend to master the mystical arts. Gardaland at Lake Garda, Italy, is home to a magic mine and an enchanted forest. During the walkthrough parts of the attraction, you’ll encounter helpful wizards and interactive magical artifacts. The “ride” portion of the experience takes place in a digital theater, where you will learn how the mystical realm works…as long as you speak Italian.

I don’t have to tell you how popular the haunted house theme is today. Spirit Halloween stores are ubiquitous, while Halloween Horror Nights at Universal and Mickey’s Not-So-Scary Halloween Party have spiked in popularity over the past few years. Other theme parks have gotten into the act with more permanent offerings. At LEGOLAND Windsor, Haunted House Monster Party is an adorable, child-friendly indoor ride hosted by a Lego vampire turned DJ. It’s AMAZING! 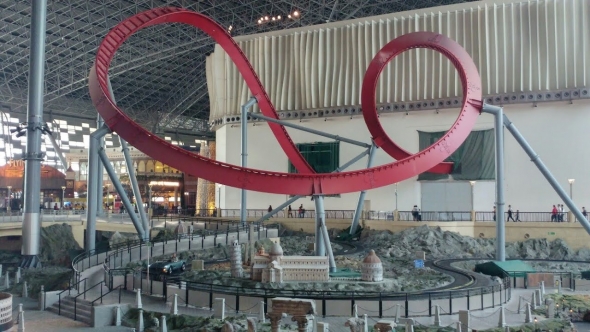 Image: Ferrari WorldAbu Dhabi’s Ferrari World is already home to the fastest roller coaster in the world, Formula Rossa. For 2019, this destination theme park has added another terrific ride for thrill seekers. Mission Ferrari is capable of up to 4.8 G’s of force during its 1.4-mile journey, making it one of the longest and roughest rides on the planet. The violence of the attraction is such that you’re required to wear protective goggles during the journey! You’ll feel like a professional driver! How great is that?

Undoubtedly the new attraction with the best name this year is Popcorn Revenge. This title isn’t a pair of words randomly thrown together, either. The attraction is a kind of interactive movie experience, with theming that suggests that your ride cart is a “Drive-In Seat.” From your moving chair, you will attempt to – I swear – pour condiments onto kernels of popcorn. Yes, it’s a gamified attraction and yes, your “gun” shoots imaginary butter. There’s even a boss fight! The entire ride is adorable.