The 6 Most Insane Roller Coasters in the World 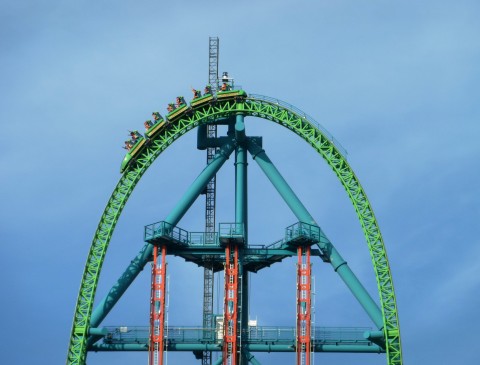 Everyone has a favorite roller coaster. That’s the nature of the beast. And every theme park operator wants to construct roller coasters that will become people’s favorites. That’s just smart business.

When engineers design new roller coasters, they have to aim for the top. Otherwise, they won’t grab enough attention to justify the huge expense of a state-of-the-art attraction. The quickest way to garner headlines is by building a record-setting roller coaster, something that sets a new standard for height or speed. And you’ll want to ride anything that does. So, which roller coasters are currently world record holders? Read on…

Few roller coasters maintain their records for more than a few years. Competition is so fierce that coaster engineers accept that any records that they gain are temporary in nature. The Beast at Kings Island is the huge exception to this rule.

The tracks are 7,359 feet long, which is 1.4 miles worth of track. Due to its length, the ride is more than four minutes in duration, an absolutely stunning time for a roller coaster. The Beast is all about endurance and has stood the test of time. Those ride designers back in 1979 deserve a LOT of credit for what they did.

Half of the record holders that we’ll discuss today aren’t from North America. Steel Dragon 2000 is the first one, and it shows just how temporary records can be. My beloved Millennium Force was once the longest roller coaster in the world at 6,595 feet. That record lasted…less than three months. Then, Nagashima Spa Land debuted on August 1, 2000.

This steel coaster is MUCH longer, with a length of 8,133 feet. As a matter of fact, it’s held the record for longest roller coaster in the world since its arrival in 2000. Like The Beast, the length also translates to a four-minute ride. So, if you’re ever in Japan, the park in Mie Prefecture on the island of Honshu has a steel roller coaster that seems to last forever.

One of the oddest current roller coaster records is tallest wooden coaster. The current record-holder, Wildfire, wasn’t the champion until 2016. A different attraction, Colossos at Heide Park in Germany, was the previous top dog in the category, but it unexpectedly closed down in July of that year.

Since then, Kolmården Wildlife Park in Sweden has hosted the tallest wooden coaster. That ride is Wildfire, and it is 18 stories tall. At its highest point, Wildfire stretches 183.8 feet in the air, with a drop of 161 feet. As a demonstration of how fast titleholders can change, Wildfire was also not the champion at one point in 2017. It too closed unexpectedly due to “environmental concerns.” The Swedish government ultimately reinstated Wildfire’s operational license.

In case you were wondering, while Wildfire was down, the tallest wooden roller coaster in the world was T Express at Everland in South Korea, which is basically the same height as Wildfire at 183.8 feet, but it loses on some technicality I don’t claim to understand.