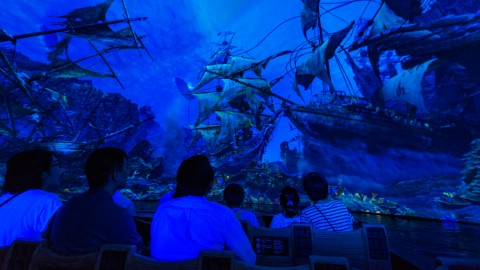 The Walt Disney Company owns, operates, or authorizes the usage of its brands at six different theme parks around the world. Four of them are outside of the United States, with one in Europe and three in Asia. Few theme park tourists are fortunate enough to visit all of them. That’s tragic, because you’re missing out on some of the most brilliant Disney rides ever built. Today, let’s take a look at some of the best Disney attractions outside the United States.

The Star Tours concept is more than 30 years old at this point, but the underlying mechanic is still clever. You stick a bunch of guests in the same simulator and then stick a giant projector screen in front of them. Then, you give them specialty glasses so that they can see in 3-D. The hydraulic motion simulator is an efficient storytelling device that has proven timeless. The technology has improved dramatically over those 30 years, though.

At Hong Kong Disneyland, the latest version of the Advanced Technology Leisure Application Simulator (ATLAS) drives the action in the first Marvel attraction in any Disney theme park. The output is a vastly superior experience to Star Tours due to the technological innovation and some tight theming. The Iron Man Experience is set in Hong Kong, which enhances the realism of the ride. Guests will recognize the sights and appreciate the views.

While Star Tours – The Adventures Continue debuted only a few years ago in 2011, the Iron Man Experience definitely seems like the most futuristic iteration of the ride premise currently available. As Disney’s American parks enhance their Marvel profiles, Iron Man Experience should be the perfect update.

Journey to the Center of the Earth (Tokyo DisneySea)

When you hear that a ride is based on the same scheme as Test Track and Radiator Springs Racers, an idea forms in your mind. You expect a certain kind of dark ride. Journey to the Center of the Earth will subvert those expectations with its style and ride design. One of the most colorful attractions ever designed, it’s an illuminating ride that follows its thematic title carefully. As you journey down into the depths of the planet, you’ll see dozens of rock formations and even some creatures that don’t mind the scorching heat.

Then, the ride offers one final surprise. When you explode into darkness and approach rock bottom in the Earth’s core, you’ll see an unexpected burst of light as you briefly reach the outdoors before almost immediately descending back into the abyss. It’s the antithesis of Test Track and Radiator Springs Racers despite the core architecture. Due to its styling, it would fit perfectly at either The Land or The Seas With Nemo and Friends at Epcot, and the only people who would know its similarity to Test Track are those who have studied ride engineering.

Perhaps no Pixar movie today better illustrates Kawaii aka cute culture better than Monsters, Inc. The monsters are adorable, Boo is adorable, and even the laughs skew toward warm and gentle. Japan is the land of Kawai, so of course their version of a Monsters, Inc. ride would be the cutest attraction imaginable. It’s a conventional dark ride with standard set pieces that magnificently recreate the movie universe.

The Oriental Land Company plussed the ride in a unique way, though, and it’s one that I would love to see Disney bring to the United States. All of the riders receive flashlights. Along the ride path, they can direct the beams of their flashlights at the Monsters, Inc. insignia. When you do so, it lights up, and may even cause hidden characters and items to appear. For example, you’ll travel through a locker room. Aiming your flashlight accurately will make several lockers burst open and monsters to appear. I guess they sleep in the lockers or something?

Ride & Go Seek is a wonderful attraction on its own, but the interactive element delights children. They’ll laugh excitedly every time they trigger an event. It’s the perfect Disney immersive technique and it seems naturally suited for Disney California Adventure, the new home for all things Pixar.