Walt didn't live long enough to step into his completed “Florida Project,” but Walt Disney World and its theme park, Magic Kingdom, were well into the design phase by the end of the 1960s. Magic Kingdom would be a new and improved Disneyland, given the benefit of size, hindsight, and master planning. It was to include all the best of the original Californian park repackaged and upsized for the international audience who would flock to “The Vacation Kingdom of the World.”

Certainly, the compelling concept of Submarine Voyage warranted its inclusion in Magic Kingdom, and like all the other Disneyland originals exported to Florida, Magic Kingdom designers hoped to turn the Submarine Voyage on its head and create an even grander, richer, more detailed experience. 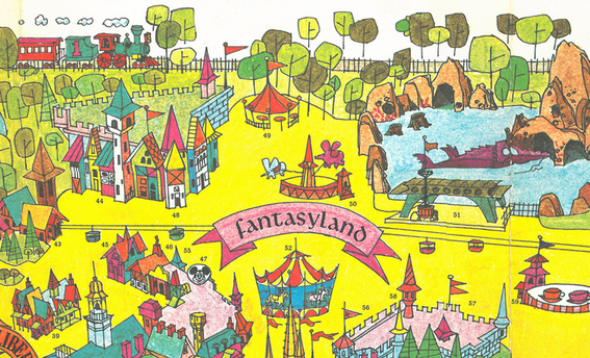 So Imagineers had a brilliant idea. Whereas Disneyland’s ride had cast the vehicles as the star – as technological wonders of tomorrow – a sister attraction in Florida could recast the attraction as a fantasy adventure focused not on the underlying technology, but on the unbelievable voyage itself. And Disney had just the intellectual property to make it happen! 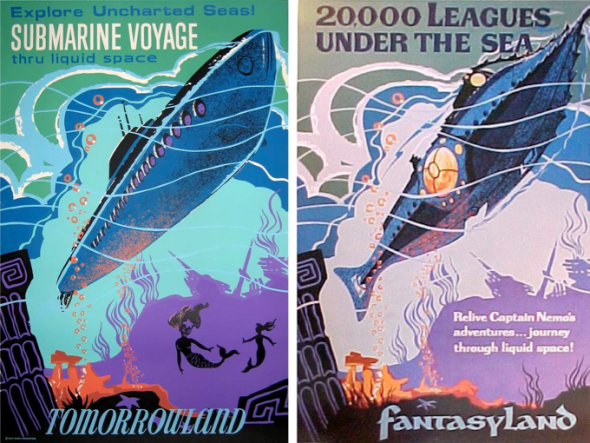 Located in Fantasyland instead of Tomorrowland, Magic Kingdom’s ride would open as 20,000 Leagues Under the Sea: Submarine Voyage.

George McGinnis worked off of Disneyland’s Cold War submarine blueprints and restylized them to resemble Harper Goff’s iconic fantasy subs from 20,000 Leagues Under the Sea. The stark, sleek interior of Disneyland’s would be improved, too. To match the Victorian “steampunk” style of the film, the interior of Magic Kingdom’s subs would be outfitted in rivets, cogs, red leather, and bronze portholes. 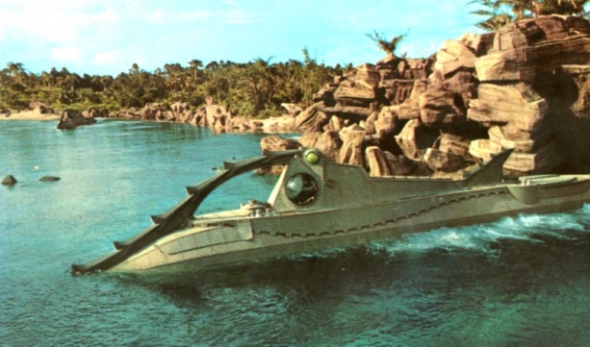 On board narration was recorded by Peter Renaday as Captain Nemo (impersonating James Mason) as new scenes were designed to compliment some of the Disneyland originals. 20,000 Leagues Under the Sea at Magic Kingdom opened just a few weeks after the park itself, on October 14, 1971.

Seated within the hulking metal frame of the docked Nautilus, boarding guests would get their first view of the watery world beyond the ride's copper portholes while the stirring and dramatic sounds of Nemo's organ play. It's a stunning introduction to the nautical world where barnacle-covered steel arms support the loading dock overhead. Pulling away from the landing, the subs pass through bubble curtains as Nemo and his crew call through the ship: "Dive! Dive!"

As the bubbles dissipate and the ship steadies, Nemo introduces himself and his undersea realm as guests get their first glimpse of the ride's sea life: great green turtles, sea bass, giant clams, and schools of fish (all represented by animatronic creatures). "This is Captain Nemo speaking. Welcome aboard the Nautilus. We are proceeding on a course that will take us on a voyage 20,000 leagues under the sea.  En route, we will pass beneath the Polar Ice Cap and then probe depths seldom seen by man."

The ship would continue on past scientists studying the sea life and a memorable (for its absolutely inaccuracy) scene of an octopus battling a shark. 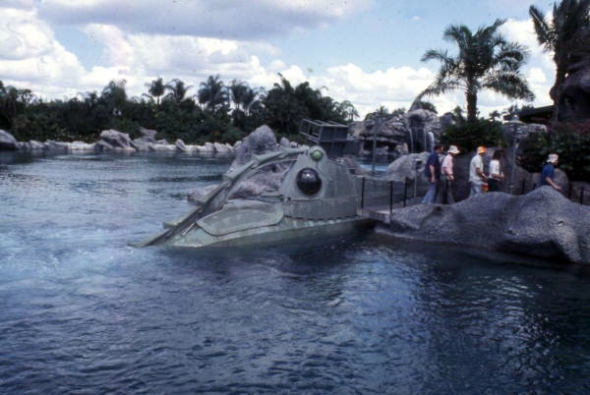 Pressing on, the sub's crew would warn of an upcoming storm, so Nemo would call on the ship to dive once more to safety. Passing through another bubble field, the remainder of the ride would now take place in the ride's showbuilding, setting the tone for the darker depths of the ocean. This time, the calming bubbles would reveal that the Nautilus had found itself within the Graveyard of Lost Ships. "Man-eating sharks" circled like vulture above the centuries-old splinters of grand ships.

Beyond, the sub would pass through the deepest waters of the polar ice caps, gliding effortlessly between the hypnotic, angular bottoms of massive floating icebergs. This scene was one of the ride's most gorgeous, as Nemo would point out that, even here, light from the Aurora borealis would refract through the ice above as the polar caps would radiate in orange, yellow, and green.

A descent to the darkest depths brings the Nautilus near to its failure point, but not before eerie bioluminescent life forms swarm around the ship with their natural glows amid the pitch black darkness. At Nemo's command, the ship rises a bit as it encounters an ancient lost city full of crumbled statues and... mermaids? Sea serpents? "Mr. Baxter, if you think you're seeing mermaids and sea monsters, you've been submerged too long!"

Before you can study the scene too much, volcanic activity signals that the underwater systems that buried this lost city are still very much alive. "That seething mountain still denies rest to the civilization it submerged thousands of generations ago.  Helmsman! Steer clear of the tottering columns!" 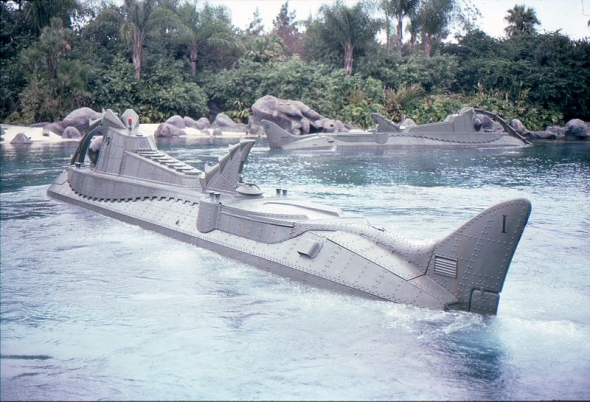 In the ride's memorable and outstanding finale, a red alert signals that an aggressive giant squid has captured another submarine ahead. "Good Lord!  It's one of ours.  It's hull has been crushed like an eggshell!" Indeed, a giant squid has ensnared another Nautilus, marked "XIII" (to represent the 13th in the ride's fleet). Then, another creature advances on the sub. Nemo initiates an electrical charge across the metallic surface of the sub, and as strobes flash, you can see the beast's tentacles clinging to the ride's portholes. This encounter with the squid remained the ride's signature and most beloved scene even to today... an outstanding example of Disney's earliest giant animatronics... and underwater, at that!

Having narrowly escaped the creature, the Nautilus initiates an emergency manuever. In another flash of bubbles, the sub begins to surface. When the bubbles cease, daylight once again streams down through the water. "Ladies and gentlemen, in just a few moments we will be docking at Vulcania, our home port.  It has been a pleasure having you aboard the Nautilus, on this memorable voyage that has taken us 20,000 leagues under the sea. Captain to bridge. Reduce speed and proceed to number four berth.  Stand by to dock."

As always, we'll end our look at the ride with a rare on-ride video to help memorialize the ride experience. Take a look and see if the video cements any memories of this ride that might otherwise have been lost to time. Then, read on to find out why 20,000 Leagues suspended sails, and what became of the incredible ride.

Kind of! Like the article says, they're essentially just boats that travel along a flat track (using diesel / electric engines), just with guests seated below the water line.

Assuming you're talking about WDW, the ferries that run across the Seven Seas Lagoon between the TTC and Magic Kingdom are fully free-floating, and are often run between the resorts and the Magic Kingdom. The maintenance facility for them (and the resort launches and cruisers) is off the northwest tip of Bay Lake. The craft you're probably thinking of are the paddlewheel steamers that run along the Rivers of America around Tom Sawyer's Island in Frontierland, and are vehicles that run on an underwater track, but are not semi-submersible.

I went to WDW on my honeymoon in 1975, and again a few years later. The 20K ride was the most beautiful and peaceful spot in the park in MHO. At dusk, the sight of Nemo's subs gliding around the huge lagoon and emerging from the waterfalls was stunning. The first time I rode the lagoon was having a problem with alge and visibility was limited, but the second ride a few years later was perfect and a very different experience! I understand the problems that plagued the ride, but do wish a modern version, similar to DisenySea would again be available. Disney continues to give one of it's most valuable properties, 20,000 Leagues Under the Sea a short-shift in it's parks.

you can still see this ride in Disneyland Paris! Half of discoveryland there is Jules Verne themed (including space mountain), and this is still one of the attraction

Yeah! We wrote about that on page 5 under "Discoveryland." However, the attraction there is a large walkthrough of the interior of the submarine, similar to the walkthrough that was at Disneyland during its first decade. But the 20,000 Leagues Under the Sea attraction at Magic Kingdom was a real ride, with 38-passenger subs sailing underwater through dark ride scenes! So, quite a bit different from the walkthrough in Paris!