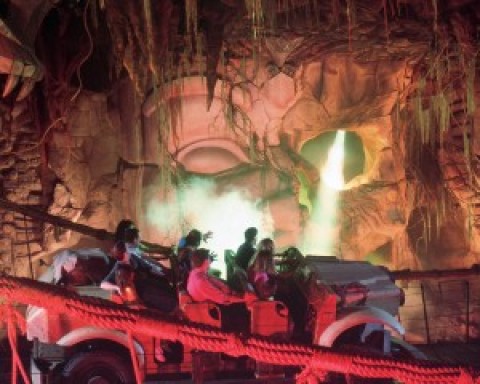 Blue Sky. It’s a phrase that’s echoed quite a bit at Disney Imagineering, and one that’s been a key element of the company’s design process for decades. Like its namesake, the Blue Sky phase is a period in which Imagineers are asked to think without limit – an endless, expansive horizon where the harsh realities of business are absent.

The talented folks at Disney Imagineering are asked to dream up whatever incredible experiences they can. Even though projects must eventually be scaled back to fit budgetary limitations, the extraordinary drafts of the Blue Sky phase are responsible for many “wow” moments that make the cut and produce incredible rides.

In the late 1980s, Disney was standing tall after a successful collaboration with filmmaker George Lucas (the result of which was 1986’s Captain EO and 1987’s Star Tours). At once, Imagineers were tasked to create a groundbreaking ride based on Lucas’ wildly successful Indiana Jones series (then, two films with a third in the pipeline).

The plans were immense and called for radical transformation to the park’s Adventureland (which still claimed 1955’s Jungle Cruise as its sole E-ticket attraction) and indeed, the park as a whole, creating an entire sub-land dedicated to the khaki-clad adventurer. 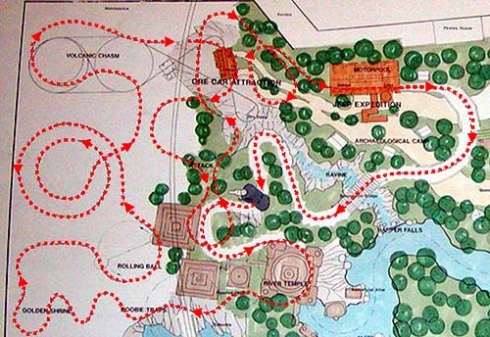 The new sub-land, situated alongside the Jungle Cruise, would've contained an EMV dark ride (outlined in red above) and a roller coaster, also absorbing the Railroad and Jungle Cruise. Photo by Nancy Stadler.

Collectively called Indiana Jones and the Lost Expedition, this mega-attraction (on the scale as Disneyland Paris’ original Discovery Mountain) would have contained two massive rides centered around a crumbling “River Temple” perched on the edge of the Jungle Cruise’s waters. Amid excavation equipment, makeshift scaffolds, and humming generators, visitors to this very-alive dig site would choose between two attractions.

The first, labeled only as “Ore Car Attraction” on leaked site plans, would likely have been a roller coaster (of the family variety, based on overhead designs) placing riders into the exhilarating finale of Indiana Jones and the Temple of Doom, where rickety, rusted mine carts whiz along volcanic chasms.

The second attraction was a “Jeep Attraction” dark ride through the perils of Indy’s most famous escapades, including his close encounter with a menacing rolling boulder. It’s unclear if Disney would or could have developed its EMV technology (the jeeps-on-a-motion-base configuration used on Disney’s current Indiana Jones Adventure ride) if development had gone ahead in the late 1980s.

On top of the two new attractions, the Jungle Cruise ride would have been re-themed and re-routed through the attraction’s massive show building, skimming along the lava-themed waters of the ride’s volcanic chasm for a peak of the attraction’s interior before exiting through a rocky gorge. Meanwhile, the Disneyland Railroad that circumvents the park would have chugged across a groaning wooden bridge through the complex on its round-trip circuit around the park.

(Click for larger) The incredible scale of the Lost Expedition: An EMV ride (jeeps), roller coaster (mine carts), Disneyland Railroad (upper center), and the Jungle Cruise in the same building. Image © Disney.

Ultimately, Indiana Jones and the Lost Expedition stayed lost. Instead, then-CEO Michael Eisner allegedly fell head over heels for an expansion aimed at the northwest end of the park by a competing team of Imagineers: “Zip-A-Dee River Run” (of course, he’d later insist that the attraction advertise the company’s 1984 movie Splash, creating the now-admired Splash Mountain). Not only did Splash Mountain provide a much-needed water attraction, but animatronics from the recently-shelved America Sings show could be re-used in the proposed flume ride, saving a lot of time and money.

In 1995, the spectacular Indiana Jones Adventure: Temple of the Forbidden Eye opened in the corner of Adventureland earmarked for the original complex. The attraction (the “jeep” portion of the Lost Expedition) sends guests on a wild, off-roading journey through the mysterious temple where a lost god’s evil gaze spells doom for all who look into his eyes. While we can’t know for sure how similar the current ride is to what might’ve been planned, Temple of the Forbidden Eye certainly has a “grand” feel that no other ride can match, with much of the action taking place in a three-story chamber where jeeps cross bridges, slam down ancient staircases, skid down mudslides, and slalom in and out of caverns – a larger than life setting that appears very inspired by the Lost Expedition’s over-scaled design. 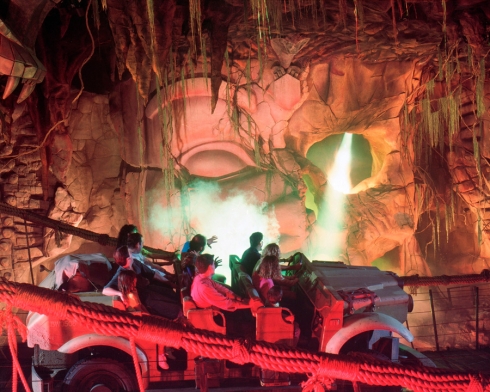 Disneyland's current Indiana Jones Adventure borrows from the Lost Expedition's grand scale in a multi-story cavern with the disfigured eye of the ancient god Mara looming ahead. Image © Disney.

The Jungle Cruise was changed for the current attraction, but by being routed around the new temple instead of through it. In addition, the boats (formerly pristine vessels with ornate, red-and-white striped canopies) were “aged” to fit Indy’s tattered, worn, rusted expedition theme. Indeed, all of Adventureland was tweaked to unify under the ride’s 1930s time frame and produce a consistent atmosphere absent in other Adventurelands across the globe.

Clues Across the Globe 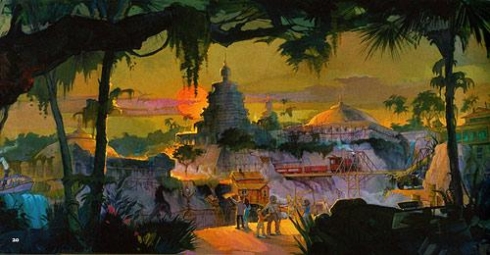 Absorbing much of Adventureland into its setting and timeframe, the Lost Expedition sub-area would've re-defined Disneyland with its immense scale. Image © Disney.

Indiana Jones Adventure: Temple of the Forbidden Eye was an incredible triumph when it opened and redefined what a dark ride could be. It’s still the most technologically advanced ride that Disney Imagineering has ever created, and is unquestionably one of the most popular attractions at the whole Disneyland Resort.

But good ideas never die at Disney, and true to form, the elements of the Lost Expedition have appeared, just not where originally intended. In 1993, Indiana Jones et le Temple du Péril opened at Disneyland Paris – an admittedly rushed mine-cart coaster that very closely resembles the plans for The Lost Expedition’s, but outdoors. Official concept art reveals that the outdoor coaster was originally intended as the first part of an Indiana Jones sub-area (including space reserved specifically for a clone of California’s EMV ride) that, so far, has not come to pass.

At Tokyo DisneySea, a clone of California’s jeep ride did come to fruition, and is placed directly next to a copy of Paris’ mine-cart coaster, though the latter doesn’t reference Indiana Jones in Japan. Still, it’s the closest that the two rides – originally planned to be joined under one roof and one name – may ever be.

Close, but not close enough! We can only wonder what might’ve been lurking in the sprawling, multi-level temple complex had Dr. Jones' Lost Expedition been found...

You guys have played up the Indianna Jones ride WAY too much. I was actually very disappointed in how the ride went, especially with mechanical errors and the constant stopping and shutting down of the ride while we were there. But, if they had made an entire land and made the ride a bit bigger, it would've been way cooler. I'm sad to see Disney throw out so many awesome ideas for stuff that's not so great, or not nearly as cool.