Indiana Jones Adventure: Temple of the Forbidden Eye At Disneyland

A dark ride affixed to a motion simulator base, the Indiana Jones Adventure carries guests into the darkness of the Temple of the Forbidden Eye, an ancient lost Bengalese temple that has become the new vacation hotspot for would-be adventurers in 1935.

Inside, rumor has it that the ancient god Mara promises to grant one of three gifts to any who enter his Hall of Promise: eternal youth, earthly riches, or visions of the future. But legend also speaks of a curse: whosoever looks into the corroded and dark eye of Mara will be sent to the Gates of Doom.

The ride is also quite well known for its intro scene, in which the jeep appears to select one of three hallways, each resulting in a different gift of Mara being bestowed on riders. When entering the "Eternal Youth" room, for example, paintings of elderly people becoming young again adorn the walls, statues of women pouring out jugs of water appear, and the room is cast in a blue light, with the reflection of churning water displayed across the walls. When the jeep enters through the "Visions of the Future" door, the paintings appear differently, the walls are cast in purple lighting, and the jeep reclines to display an LED star-field visible through a hole in the top of the temple.

This attraction also uses the same vehicle and a bolt-for-bolt identical layout as "Indiana Jones and the Temple of the Crystal Skull" at Tokyo DisneySea, and "Dinosaur" at Disney's Animal Kingdom.

Photos of Indiana Jones Adventure: Temple of the Forbidden Eye 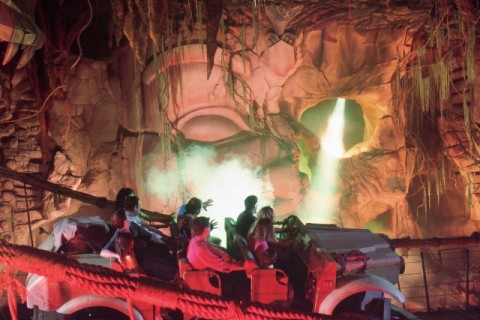 See all photos of Indiana Jones Adventure: Temple of the Forbidden Eye

Reviews of Indiana Jones Adventure: Temple of the Forbidden Eye

This was a our first ever ride at a Disney theme park way back in 1995. Indiana Jones was the newest attraction and the lines were 2hrs long. I'd never waited in line that long for anything before so I remember thinking that this had better be worth it. Well I can tell you that it was and it still is despite it's age. From the excellent in-line theming to the ride itself it's totally immersing. I don't want to spoil the experience for any would-be riders of this attraction by describing everything that happens so I'll just tell you that it's a superbly thrilling dark ride with loads of frenetic fun and lots of twists and turns.
If you're an Indiana Jones fan you'll love it and, even if you're not, I'm sure you'll disembark the Jeep at the end and walk away humming that famous theme tune. Go do it. It won't disappoint.