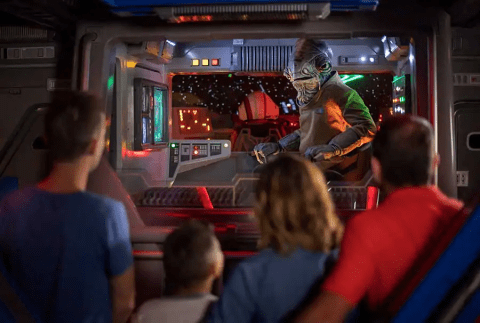 But like so many of Imagineering’s most clever tricks, the secret to this surprising moment also happens to be surprisingly simple… Or at least, a series of surprisingly simple ideas that amount to a stellar E-Ticket moment. If you haven’t made it to Star Wars: Galaxy’s Edge yet, you might want to skip today’s peek behind the Imagineering curtain…

Today, we’ll peel back the wrap on the first of many amazing tricks in Star Wars: Rise of the Resistance at Disneyland and Disney’s Hollywood Studios. Are you impressed by Disney’s showmanship on this next generation “U-Ticket” experience?

As with all of Imagineering’s greatest illusions, a whole lot of legwork happens before the trick itself. In this case, it’s the build-up to your recruitment by the Resistance effort seeking to escape the tyranny of the First Order. Or as it’s commonly known: the line.

As guests wait in line for Star Wars: Rise of the Resistance, they’re touring the eked-out hideaway of the Resistance, which has set up a temporary and transient base camp in the long-abandoned tunnels of the outpost planet Batuu. The remote forests of Batuu are now littered with evidence of the Resistance’s activities, like hastily-added air flow tubes, strung up wiring, and supplies ready to move at a moment’s notice.

That all coalesces in the Briefing Room, where – via a hologram transmission – Rey reports that the First Order’s sniffing around Black Spire Outpost has put them all at risk. With the Batuu base compromised, recruits need to covertly get off-planet and make it to the Resistance base on Pacara for a rendezvous with General Organa. Lieutenant Bek and Nien Nunb will pilot an Intersystem Transport Ship (ITS) with Poe Dameron’s X-Wing as an escort.

With the mission received, guests are hurried out of the Briefing Room by Resistance personnel and – much to first-timers surprise – outdoors where the ITS awaits… The massive shuttle is parked precariously beneath the cliffs of Batuu – completely invisible from the forests or village surrounding. And as Resistance fighters get recruits pumped for their journey, the ship seems to lumber to life, its seering blue thrusters kicking on and scorching the cliff walls behind… It’s time to climb aboard.

One of the weirder elements of the ITS for most guests is that recruits are standing. Indeed, just like shuttles on our planet, the lumbering vehicle isn’t made for light speed jumps; it’s the galactic equivalent of a bus, complete with bars to hold onto for support. Another “wow” moment? Riders are on-board alone with two Audio-Animatronics: Lieutenant Bek and Nien Nunb.

With the doors sealed, the ITS departs. With a great heave, guests grip onto the hand rails, feeling the forward momentum of the ship’s departure. Through the use of screens (which adjust to reflect real daytime or nighttime views) riders can watch out of the front windshield or the rear porthole as Batuu sinks away into the blackness of space.

Of course, a surprise appearance by an army of First Order TIE Fighters signals to ITS to take evasive maneuvers, bobbing left and right, recoiling from strikes, and more. Outmaneuvered, Dameron departs for reinforcements, promising he’ll be back for us and reminding us to stay strong. As his X-Wing races to lightspeed and communication is lost, Bek makes a startling discovery: we’ve been caught by the pull of a Star Destroyer.

Through the back window, riders can watch as our powerless ITS floats through the blue light barrier of the ship’s hangar bay, with Bek reminding us to keep the Pacara base’s location secret. The windows show our helpless ship drawn deep into the hangar, wedged between slanted walls of parked TIE Fighters. The ITS powers off as Bek leaves us with one plea: “They’ll want to know the location of the secret base. Tell them nothing. The future of the Resistance is at stake…”

And with that, the ship’s doors – yes, the same ones we entered through – open into the hangar, revealing one of the most iconic sights in Disney Parks… So how does it work? Read on…