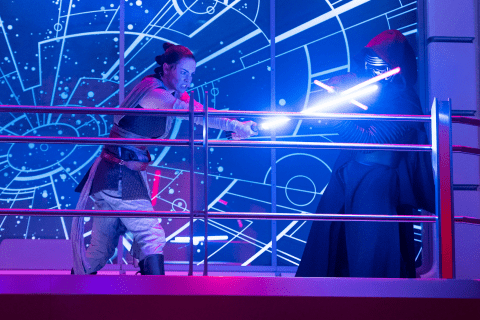 The Star Wars Saga has left quite a footprint at Walt Disney World—from Star Tours to the towering spires of Star Wars: Galaxy’s Edge, guests have plenty of opportunities for adventure in that galaxy far, far away these days.

The only problem is access to Star Wars: Galactic Starcruiser remains inaccessible to most visitors due to a $5000-6000 paywall. Ouch.

Here are a few of the top ideas we want to see make that jump from Star Wars: Galactic Starcruiser to Galaxy’s Edge ASAP…

One of the most intriguing concepts originally pitched for Star Wars: Galaxy’s Edge was a unique take on interactions between cast members and guests. Every cast member inside the Black Spire Outpost is 100% playing a character in the Star Wars universe, and each one of those characters has a backstory and motivations that guests might encounter in different ways. While we saw Disney give some wiggle room to the never-break-character policy shortly after opening (some guests really struggled with the concept despite it not being that unusual in Walt Disney World), generally cast members continue to default to some level of remaining in-world at all times.

This ultra-immersive mode wasn’t just for atmosphere. Disney claimed that each visit to Star Wars: Galaxy’s Edge could ultimately affect your encounters with cast and characters, depending on how guests interacted with various elements throughout the land. Your performance flying the Millennium Falcon, your choices in the Star Wars Datapad game, and even your random interactions with cast members could result in fresh interactions and even hidden quests within the land being revealed.

We saw some of this shortly after the land’s opening. I recall seeing both kids and adults taken on mini-quests with Rey and Vi Moradi at Batuu East (Walt Disney World), for example. We had a pretty cool interaction ourselves with Vi-the-Spy as we helped hide her from wandering stormtroopers. We also saw some neat occasions where guests could play Sabaac with specific Batuu locals, and if they won enough, some even scored a rare secret reward like a Kyber crystal necklace.

The sudden changes wrought by the COVID-19 pandemic put a pretty big damper on much of this playfulness, and in truth, we never saw the hidden missions idea take off again. Datapad scores seem to not affect much, and characters were hidden away behind barriers for safety, making fun interactions difficult. Even with characters having emerged once more, the hidden quest concept seems to have been repurposed to only be accessible to those taking part in Star Wars: Galactic Starcruiser during their visit to Batuu.

There are hints Disney may make the hidden missions idea accessible again, such as in the new bounty hunter quests tied to MagicBand+. However, how much spontaneous interaction with cast members this will entail remains unclear. We would love to see this concept for random pixie dust moments within the land revisited, particularly if guests might be able to score some sort of small reward or token in the midst of it.

A full table-service restaurant was another idea originally pitched for Galaxy’s Edge. Oga’s Cantina is a great spot well worth visiting, but a full restaurant it is not. This remains one of the gaping holes in Star Wars: Galaxy’s Edge—something that would seem a high priority in a park that can already feel a little scant on dining variety.

The original concept floated for a sit-down restaurant featured an intergalactic dining hall with live entertainment—something we saw make the jump to Star Wars: Galactic Starcruiser. Guests on the Halcyon enjoy their meals at the luxurious Crown of Corellia, and their visit includes a live musical show with the enigmatic Twi’lek diva, Gaya. The Crown of Corellia makes a lot of sense within the cruise-like setting of Star Wars: Galactic Starcruiser, and it is fair to say you’d want to do something different for a restaurant in the far-more rugged setting of Batuu.

The biggest challenge for a table service restaurant in Star Wars: Galaxy’s Edge would be theming—how do you differentiate it from Oga’s Cantina and Docking Bay 7? One option would be to add an extension onto Oga’s specifically for sit-down dining—the story could be something along the lines that Oga has decided to branch out in her business ventures. Considering Batuu’s seedy underbelly, a restaurant run by a rival crime boss is another possibility that could add depth to the story of the Black Spire Outpost. Disney could also go a more whimsical direction with something akin to Dex’s Diner on Coruscant from the prequels—maybe a chef got stranded on Batuu and decided to make the best of it? There are many great possibilities to make this happen.

Of all the potential additions to Star Wars: Galaxy’s Edge, this is the one we’re the most surprised Disney hasn’t moved on yet—at least not in any fashion regularly accessible to guests.

Disney has played with the concept of high-action segments in Star Wars: Galaxy’s Edge before. At press debuts for both the land and Star Wars: Rise of the Resistance, Disney pulled out all stops to put on onetime action spectaculars complete with lightsaber battles, fireworks, a live Hondo Ohnaka character, and even a flying X-Wing drone. After these press nights, however, we never saw these concepts revisited. The only exception is found aboard Star Wars: Galactic Starcruiser, where guests experience several high-action sequences including a stunning lightsaber battle.

Guests within Star Wars: Galaxy’s Edge do get to experience several “slice of life” moments where characters appear throughout the parks, such as Chewbacca and Rey repairing an X-wing or the Millennium Falcon, or Kylo Ren landing on the planet and demanding to know where the Resistance is hiding. It seems a natural jump to have a few random times during the day when actual skirmishes between Resistance and First Order forces take place. Maybe Vi-the-Spy has to make a narrow escape from Stormtroopers that involves some clever blaster effects? Maybe Rey and Kylo Ren face off in the evening?

The storytelling minds at Disney could certainly come up with something and adding new layers to the plot of the Black Spire Outpost can only enrich the experience to keep guests wanting to come back.

How about aliens, factions (that actually affect your visit) and vibrant original stories?