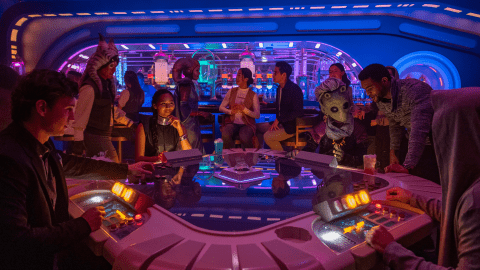 It is difficult to put a label on what Star Wars: Galactic Starcruiser is because there truly is nothing like it out there—an all-inclusive, stunningly immersive, two-night / three-day adventure that makes you an active character in a Star Wars story. It’s less a Star Wars-themed resort and more like a video game brought to life, an experience more akin to a multi-day live-action role playing game than anything else available in the theme park world.

Similar to Star Wars: Galaxy’s Edge, Galactic Starcruiser has been met with the full range of reactions, from Star Wars fans crying “Take my credits!” to others scorning its staggeringly high price point. From promotional videos that failed to land among fans to mixed media reactions, to cries among bloggers that the resort can’t get enough bookings (a questionable claim), it has been challenging to sift through the noise to get a real pulse on if Star Wars: Galactic Starcruiser delivers.

At the time of this writing, it has been nearly a month since the opening of Star Wars: Galactic Starcruiser, and that has allowed time both for media reviews to go live and for guest reactions to accumulate. We searched across the web and social media to find the common threads and real answers.

Is Star Wars: Galactic Starcruiser a hit or a flop? Here’s what we found…

1. The bantha in the room: The price is high but includes A LOT

Much of the criticism Disney has faced over the project has been rooted in this important issue—is Star Wars: Galactic Starcruiser just too blasted expensive? The answer isn’t as clear cut as it seems.

There’s no question that the high price is an insurmountable issue for many fans. It’s well out of the range of most middle-class families visiting Walt Disney World with or without kids. It’s also frustrating that some of Disney’s best ideas for Star Wars: Galaxy’s Edge (particularly the immersive elements of guest missions) have been locked away only for those who can afford this exclusive experience.

Here’s the thing though… the price includes far more than any other experience at Walt Disney World. In truth, you can’t think of Star Wars: Galactic Starcruiser as a resort. It has far more in common with an all-inclusive cruise.

Unlike a normal Disney visit where guests have to purchase park tickets, dining, and personalized experiences separately, these elements are all included in the cost of a visit to Star Wars: Galactic Starcruiser. Specifically, the price includes your lodging, all food and beverages (excluding alcohol), a meal at Docking Bay 7, admission to Disney’s Hollywood Studios with Lightning Lane access to Star Wars: Rise of the Resistance and Millennium Falcon: Smugglers Run, valet parking, an exclusive MagicBand and commemorative pin, and a bursting itinerary of ongoing interactive entertainment, much of which is specifically personalized to your party.

When you take all of those things into account, the actual lodging cost of Star Wars: Galactic Starcruiser lands closer in range to Disney Deluxe resorts like The Grand Floridian. It’s still a very high number that prices out much of its target audience, but there is at least a lot included for the cost. We are still hopeful to see discounts in the future that may make it more accessible.

2. The Good: The experience is impressively, stunningly real

With only rare exception, the most common reaction we saw from both reviewers and guests was that Star Wars: Galactic Starcruiser is dazzlingly immersive. From the moment you board the Halcyon to the conclusion of your journey, you are convincingly transported to the world of Star Wars.

One of Disney’s original goals with the opening of Star Wars: Galaxy’s Edge was to give guests an experience that felt not only deeply immersive but deeply personal. While they succeeded in this on some level, Star Wars: Galactic Starcruiser takes that concept to a whole new level with an interactive theatrical experience that engages guests with intrigues from beginning to end. Many visitors described how quickly they were taken in by the depth of the individual characters and the stories taking place throughout the ship.

We have compared the concepts for Star Wars: Galaxy’s Edge to a living version of MMORPG video games before. Star Wars: Galactic Starcruiser takes this idea to the next level, inviting guests into an experience far more rich and intimate than anything that could be achieved in the bustling environment of Disney’s Hollywood Studios. From the rooms to the food, to the activities and entertainment, guests described being absolutely star-struck by the level of immersion and attention to detail in Star Wars: Galactic Starcruiser. It truly is a Star Wars fan’s dream come true.

But how about for casual visitors?