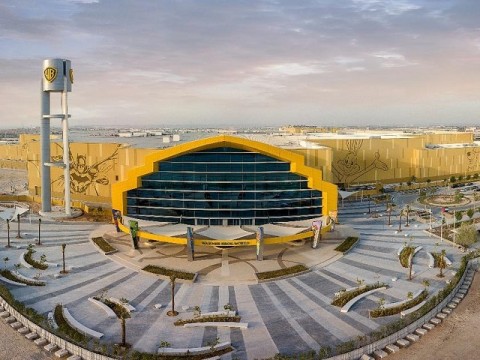 It's not every day that we see a major, innovative, and immersive new theme park open in the United States. That makes sense. For at least the last few decades, the American theme park market has left behind a "growth" phase and settled into a "maturing" phase. Like a sponge that can't hold even one more drop of water, many analysts see the theme park landscape of North America as "full." (For example, 2025's Epic Universe will be the first major, destination park in the country since 2001's California Adventure.)

But elsewhere, it's a very different story. Across the world, brand new parks – many designed and built by the best in the business, rooted right here in America – are opening to brand new audiences. Today, we want to highlight one and the industry shifts that brought it to life. Join us as we set the stage for Warner Bros. World Abu Dhabi and highlight some of the incredible attractions in this 21st century park!

The entertainment industry’s gravitation to the Middle East might be unexpected at first glance. Though Disney and Universal have made splashy entries into new Asian markets (with 21st century resorts in Shanghai, Hong Kong, Singapore, and Beijing), the answer there was obvious: population. Disney’s two American resorts service a country with roughly 330 million people, whereas China’s population tops 1.4 billion – four times as many, and with a rapidly-evolving Middle Class looking for the kind of entertainment to fill their leisure time and take their expendable income that Americans first experienced in the ‘50s.

The case in the Middle East is different. The United Arab Emirates – home to the hot market cities of Dubai and Abu Dhabi – has a national population of only 9 million people… approximately equivalent to the population of New York City. So the sudden influx of entertainment in the UAE isn’t so much about reaching a newly-accessible population as it is something with an equal amount of potential: tourism.

Arabian Peninsula countries like Saudi Arabia and the UAE have launched an all-out media blitz to reposition their industries as innovative; their cultures, progressive; their cities, destinations!

The very fact that you’ve heard of Dubai and Abu Dhabi – and that they might conjure visions of art deco buildings, fountain shows in crystal lagoons, the world's tallest building, man-made islands, water slides, and yes, theme parks – shows that the UAE’s marketing plan is working. These two cities – about an hour’s drive from one another, and both on the Persian Gulf – are the the midst of a reimagining meant to elevate them as "global cities" on par with New York, London, Paris, Tokyo, Los Angeles, Shanghai, Cape Town, and Hong Kong.

With nearly limitless land in the deserts surrounding their modern metropolises and limitless money from the bountiful oil industry, there’s no limit to what the Middle East can finance. It makes sense that theme parks are a massive part of that push, and that international entertainment brands are eager to license their properties for introduction.

Is it working? Well…

In the initial wave of projects announced for Dubai’s Dubailand complex and Abu Dhabi’s Yas Island, there were some very, very big dreams.

In February 2008, Busch Entertainment (then-owners of SeaWorld) announced that they would open a multi-park resort complex called Worlds of Discovery in Dubai, with the iconic Palm Jebel Ali (a man-made archipelago of palm-shaped islands) gaining an orca-shaped island as its crown. That whale-shaped island would contain a SeaWorld, Busch Gardens, Discovery Cove, and Aquatica waterpark, all scheduled to open in 2012.

A month later in March 2008, Six Flags Dubailand was announced with a planned 2011 opening. (The project was re-announced in 2016.) Melding Six Flags thrills with big budget theming, this "next generation" thrill park would've been a flagship of the company.

And so it went for a (pre-Disney) Marvel Super Hero Theme Park theme park announced in 2007, a DreamWorks Theme Park, an Arabian Legend Theme Park, and a whole park dedicated to a regional children’s show called Freej (the equivalent of a Peppa Pig World, you might say), each earmarked for Dubailand.

Three months after that in July 2008, Universal Studios Dubailand was made official. With "Hollywood," "New York," "Surf City," "Epic Adventures," and "Legendary Heroes" areas, the new park was promised by a copy of its iconic art deco archway being built on the desert parcel it would occupy... a tease of what was to come.

The trick for each big-brand theme park is simple: neither Busch Entertainment, Six Flags, Universal, Marvel, nor DreamWorks would really be on the hook for designing, owning, or operating the parks that bore their name. Instead, each would simply license its brands, logos, characters, and likenesses to deep-pocketed Middle Eastern developers… who, of course, would agree to stick to the style guides, quality checks, and approvals needed to borrow from entertainment industry giants.

To do that, the developers helming and funding each project turned not inward, but to the experts at design and manufacturing firms back in the United States, hiring companies to develop the attractions for their new parks. If it had all come together, Dubailand really could’ve been the next Walt Disney World; an international destination of 21st century parks underwritten by limitless budgets, designed by industry experts, and carrying big name brands. Surely, the region would top the “Bucket Lists” of coaster and dark ride enthusiasts…

But none of it came to pass. At least, not in its expected form. The wave of announcements for Dubailand and other Middle Eastern projects happened to fall just before the start of the 2008 “Great Recession,” which tanked global economies and led to years of tourism downturn.

Projects across the industry stalled. The Dubailand project was paused, and one-by-one, Six Flags, Universal, Marvel, DreamWorks, and other big name projects went silent and then dropped out altogether... Both Dubailand (above) and the Palm Jebel Ali (visible on Google Maps) remain largely undeveloped and vacant to this day. The lofty dreams of turning the Middle East into a global theme park hub seemed to come to an end. But in reality, they were only slowed.

Sure, the wave of continuous announcements-and-abandonments in the Middle East throughout the 2010s became a sort of in-joke among industry observers. "I'll believe it when I see it" was the response to every on-again-off-again announcement. That’s not to say that the Middle East was written off as a potential new centerpiece for theme park innovation. Some projects did make it across the finish line…

The dreamed-of Dubailand was essentially canceled, but about 20 minutes from the deserted desert campus arose Dubai Parks & Resorts in 2016 – a smaller multi-park destination that includes Bollywood Parks Dubai (an entertainment-focused park celebrating the Bollywood Hindi film industry) and LEGOLAND Dubai.

Online, though, much attention has been focused on MotionGate Dubai – a “studio park” with lands themed to Columbia Pictures (a Cloudy with a Chance of Meatballs raft ride, an infamous Hotel Transylvania dark ride, and a Green Hornet coaster), Lionsgate (a Hunger Games mini-land complete with simulator and coaster, a John Wick ride, and a Step Up stage show), and an indoor DreamWorks land (a Shrek dark ride, a Kung Fu Panda simulator, and a How To Train Your Dragon ride).

The same year and about 30 minutes away, the high-profile IMG Worlds of Adventure indoor theme park opened, with several original lands as well as realms dedicated to big-money licensings of Cartoon Network and Marvel. (The park’s Avengers: Battle of Ultron ride may not quite be on the level of the Modern Marvel: The Amazing Adventures of Spider-Man, but it’s an impressive outing for a non-Disney park… especially compared to Web-Slingers.)

An hour south in Abu Dhabi, a similarly-scaled-back collection of parks has risen on Yas Island – a mixed use, master-planned development of theme parks, marinas, shopping malls, fountain shows, entertainment, and more. Ferrari World includes the world’s fastest roller coaster and a SCOOP-based dark ride; Yas Waterworld is considered among the best water parks on Earth; even a new SeaWorld Abu Dhabi is en route for a 2022 opening (though it’s an entirely-indoor facility as opposed to a whale-shaped island; what has not changed is that SeaWorld Parks have merely licensed the brand and will neither own nor directly operate the park).

Even if dreams of Dubailand never came to be, between Dubai and Abu Dhabi, there really is the start of a collection of parks exceeding the scope of Central Florida! But to our thinking, just one park really manages to approach the quality Disney and Universal fans have come to expect…