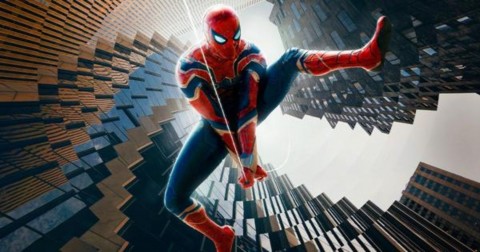 2021 was the year of the Multiverse. It all started with January's WandaVision, where the first echoes of alterate realities flickered into being. In June, Loki set up the rules of time and space, and saw a Nexus event that made chaotic universes possible. Then, in December, the path to the Multiverse came to a head with Spider-Man: No Way Home – the conclusion of a trilogy produced by Sony (who retains the big-screen rights to Marvel's web-slinging hero) – where cracks in reality let variants of another universe slip in...

Despite having practically no marketing, Spider-Man: No Way Home was supported by a campaign of "what ifs." Rumors of reprised roles, can't miss moments, and spoil-able secrets turned the film into appointment viewing, with even casual Marvel fans and curious Millennials with memories of Spider-Men-past determined to get to theaters to see it in person. Fandango and AMC's systems crashed when tickets went on sale on November 29, 2021, easily surpassing pre-sale landmarks hit by Avengers: Infinity War and Star Wars: The Rise of Skywalker, second only to Avengers: Endgame itself. Which is all well and good, but it still begs the question... did it live up to the hype?

To put it in terms Disney executives would understand: the film was the first of the pandemic to smash through the billion dollar barrier (and in a record 12 days; in third place behind Infinity War's 11 days and Endgame's 5). Just as tellingly, it earned a 94% score on Rotten Tomatoes indicating "Universal Critical Acclaim," and a rare "A+" CinemaScore from audiences. Yes, No Way Home is proof that the Marvel Cinematic Universe can easily outlive the events of Endgame, that Spider-Man retains his place in the superhero pantheon, and that viewers are willing to turn out to theaters to unravel the mysteries of Marvel's mystical, multiverse phase.

No Way Home is a true cinematic event that wraps up twenty years of Spider-Man stories in an incredible, reality-leaping, heart-wringing two-and-a-half hour spectacle. It's Marvel at its best: massive, emotional, interconnected, action-packed, and epic. You'll laugh. You'll cry. You'll applaud. Spider-Man now stands as the central, anchor character of the MCU; the hero we all root for. If only Disney could use the character in its theme parks!

After Cars Land, Pandora, and Galaxy's Edge, it would be understandable that hopes would be high when Disney announced that Marvel, too, would receive a similarly "immersive" "Living Land" at the Disneyland Resort. Would designers bring to life Asgard? Wakanda? The Stark Expo? Earth-616's New York City? Not quite.

What about the fact that the nearby gift shop sells upgraded "web-slingers", both as Spider-Man and Iron Man branded? And that the whole point of this *for sale* item is simply to increase the score on the ride... but people don't get any bonuses for getting a higher score, other than bragging rights. So what's the point of the for-sale web-slingers? To make money of course!

And Toy Story Mania doesn't have this kind of for-sale upgrade... yet, that is. Maybe if sales of we-slingers do well, Disney will start selling something similar to Toy Story Mania and other rides.

So the question is: was this ride the best use of Spider-Man or was it the best way to get more money out of guests? After all, Disney Imagineers could come up with thousands of ideas, but they settled on re-theming an existing ride to cut costs.