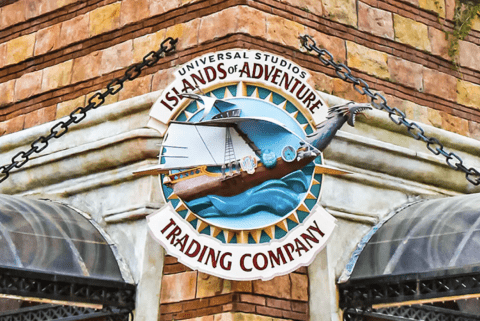 When Universal's Islands of Adventure opened in 1999, it represented the "next generation" of theme parks. Sure, it's often said that Islands was Universal's first outright attempt to build a "Disney-style" park... but in retrospect, Islands of Adventure was so much more! Filled with hidden gems and secret spots, it's a park that doesn't celebrate movies, but stories! Across Port of Entry, Seuss Landing, The Lost Continent, Hogsmeade, Jurassic Park, Toon Lagoon, and Marvel Super Hero Island, shared, timeless, intergenerational genres come to life.

But beyond the technological ride systems, incredible environments, and character collections that rightfully make Disney Parks fans jealous, one of Islands of Adventure's most beloved elements is something much simpler: its score.

In fact, at the time of the park's opening, the music that played throughout its lands was one of the park's most talked-about features among theme park fans. Why? Universal boasts that Islands of Adventure was the first theme park to ever have a custom score developed from scratch as part of its design – music written, recorded, and built into the park's infrastructure under Soundtrack Producer John Rust! The soundscapes of Islands of Adventure remain among the best in the business, and today, we're celebrating our favorite tracks from this iconic album.

You have to remember that Universal's licensing of Marvel's superheroes happened long before the "MCU" dominated the box office... and even before 1999's X-Men kicked off the superhero movie trend at all! This is no Avengers Campus of hyperrealistic layered detail and "grounded" characters; these are the pages of a Marvel comic book; bright, loud, brash, explosive, and oversaturated! Marvel Super Hero Island is the kind of cityscape you'd see lightly sketched in the background of a comic panel, or on an episode of Fox Kids' 1992 X-Men animated series.

There's no doubt that the colorful, cartoonish Super Hero Island looked pretty out-of-vogue as the 2000s progressed. But like anything in pop culture, the rock 'n' rolling "Main Street" music loop that felt downright silly in the wake of The Avengers has returned to retro-cool status; a fun, frantic throwback to the Marvel heroes' '90s Saturday morning cartoon intro theme songs. (And it's sure to be even cooler once Disney+'s X-Men '97 animated series launches.) It actually makes us glad that Universal's superhero land is "stuck" in the '90s. After all, that fits Islands of Adventure's timeless, literary style better than something like Avengers Campus would anyway.

From The Cat in the Hat to The Grinch... You know a Dr. Seuss illustration when you see one... but what would it sound like?! That was the challenge laid before the musical team responsible for scoring Seuss Landing, a whimsical, shapeless, pastel seaport without a right angle in sight.

Given that Seuss Landing is as free-flowing, wacky, and otherworldly as the sketches and rhymes of Seuss himself, it makes sense that regular instruments wouldn't do. "Welcome to Seuss Landing" was quite literally composed by assembling "Seussian" instruments from found materials, melding together different household supplies, and creating one-of-a-kind soundmakers based on the illustrations in Seuss books. The result is exactly, perfectly right – a sort of joyful, jazzy, percussive, teetering score that adds so much life and light to the already-astounding land.

Stepping from Seuss Landing to the Lost Continent is like warping between worlds. (The "flash cuts" between Islands of Adventure's lands are one of our favorite transitions in any theme park.) At once, the whimsical sounds of Seuss Landing give way to something mysterious and ethereal; the whistling, airy tones of "The Lost City."

The mini-land surrounding the Declassified Disaster: Poseidon's Fury is one of the most staggering environments ever built in the theme park, with the crumbled ruins of a hundred-foot-tall Poseidon scattered around guests, beneath the burbling faces of Mythos. It makes sense that it's music feels just as magical. It's a place that's impossible and mythical and foreign, underscored by the vocalizations of an ancient, unseen chorus. It's eerie. Unsettling. Enchanting. There are even elements of the music that blend into "Sinbad's Bazaar" (the next sub-section of the Lost Continent), setting the stage for falling deeper into mythic landscapes and far-flung places.

Speaking of which, our next track is a world away...