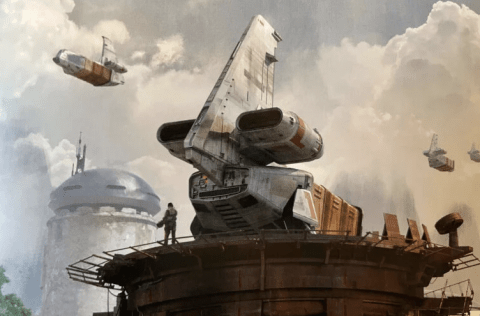 You can usually tell if you’ve stumbled on the home of a Disney animation fan just by what’s sitting on the coffee table. For years, Disney’s The Art Of... book series has beautifully opened the archives of Disney and Pixar animated films, revealing concept art, character development, scenic design, and more in beautiful odes to the artists who make these worlds real.

This summer, Abrams Books, Disney, and Lucasfilm have finally done the same for a very different kind of work of art. Written by Nerdist’s Amy Ratcliffe with a foreword by Walt Disney Imagineering’s Portfolio Creative Executive (who lead the design of the land), The Art of Star Wars: Galaxy’s Edge is a dream come true for fans of both themed entertainment design and Star Wars. The 250-page book features over 300 pieces of artwork, delving into the design (and redesign) of every attraction, show, snack, shop, and secret spot on Batuu… and some that never made it into the parks at all...

Today, we’ll take a look at 4 of our favorite concepts that were cut or cancelled from Disney’s Star Wars lands, but detailed Ratcliffe's new book. As in any The Art Of book, what didn’t come to be isn’t meant to be an indictment on designers or executives. Rather, it’s a reflection of the deep and wide process that’s used to conceive of these massive projects, and then to pare them down to the restrictions of reality, where operations, marketing, and finance teams have to make difficult edits.

So don’t imagine this list as one of grievances, but of processes and possibilities. Which do you think would've made Galaxy's Edge better? Which are best left on the cutting room floor? What else did you see in The Art of Galaxy's Edge that left you daydreaming?

It’s pretty well known that the first conceptual iteration of a Star Wars land was of a much less ambitious scale than Galaxy’s Edge ended up being. Rumors persisted for years that in California, Tomorrowland would simply be “rewrapped” as a Star Wars land, upgrading the Lost Legend: STAR TOURS, parking the Millennium Falcon atop the old Rocket Jets platform, permanently converting Space Mountain to its Hyperspace overlay, and giving Buzz Lightyear a Clone Wars redesign. Likewise, Florida’s version of the land would’ve reportedly been built around its existing STAR TOURS, overtaking Echo Lake and creating an “Immersive Lite” land stylized as Tatooine.

In both iterations, it was long believed that one of the E-Ticket attractions Imagineers envisioned was a Speeder Bike roller coaster based on Luke & Leia’s escape through the forests of Endor in Return of the Jedi. (The ride likely would’ve replaced the Autopia in California and the Indiana Jones Epic Stunt Spectacular in Florida).

The Art of Galaxy’s Edge makes it official, with Imagineer Margaret Kerrison stating explicitly, “In the early days, we talked about a fast-action speeder bike chase.” With guests straddling Speeders (in the style of the Modern Marvel: TRON Lightcycle Power Run), the Speeders would’ve “raced” through the crashed ruins of Star Destroyer (with old Tie Fighters hanging like bats), around alien landforms, and into the hairpin turns of a remote marketplace, bobbing and weaving around crowded stalls as Stormtroopers give chase.

Like all of “Star Wars Land 1.0,” this concept likely went out the window when Lucasfilm executives prodded Disney to think bigger. At the time, it was clear that the future of Star Wars lay in looking ahead, not backwards. Eschewing the “Wizarding World formula,” Disney’s Galaxy’s Edge was ultimately not set in any single, physical place from the series, but on an original planet where guests could live their own Star Wars adventure… all set in the timeline of the Disney-produced “sequel trilogy.”

Whether or not you agree with Disney’s decision to set their Star Wars land in the timeline of Rey, Finn, Poe, and Kylo Ren rather than that of Luke, Leia, Han, and Darth Vader, it’s fun to imagine what a racing “Speeder Bike” experience might’ve looked like, and thanks to The Art of Galaxy’s Edge, we have a much better idea. Our chances of seeing this coaster come to life now seem very small, since even a well-disguised roller coaster would still look pretty out of place in the hyper-immersive Galaxy’s Edge. But frankly, we wouldn't be surprised if this concept went on to influence Shanghai's TRON ride, or if this idea appears somewhere else in a new context...

Concepts for a “Bounty Hunter” attraction are barely mentioned in The Art of Star Wars: Galaxy’s Edge, but the mere suggestion of the ride is interesting in that it was nearly entirely unheard of by fans until the book’s publication! According to the concept art shared, the attraction would’ve seen eight guests board a Mandalorian bounty hunter’s ship, each straddling a turret (four on each side). Riders would then become outlaws themselves, on the run from the authorities (and surely, getting into some trouble on the way).

Of course, very little is known about the attraction. It’s fun to imagine if the pods might’ve been suspended from above, with guests actually traveling through physical scenes interspersed with wraparound screens. Ultimately, we may never know. This attraction probably co-existed with the Speeder Bike race in “Star Wars Land 1.0,” and likely would’ve featured or at least been an homage to famed Mandalorian Boba Fett.

What’s particularly interesting about the Bounty Hunter attraction concept is how relevant it feels today… Despite Disney and Lucasfilm’s agreement that their Star Wars land should look forward and not back, the heyday of the “sequel trilogy” has already waned. Poor response to J. J. Abrams’ concluding Episode IX, The Rise of Skywalker, meant that the sequel trilogy sputtered out in a flurry of controversy and middling reviews, weirdly ending Star Wars’ nine-film, forty-year cinematic canon with lukewarm reception from both fans and general moviegoers.

Not coincidentally, the “future” of Star Wars turns out to be in… the past! And not just any past, but in a whole era of stories anchored by the popularity of a Mandalorian bounty hunter. Buoyed by the critical acclaim, viral appeal, and merchandising success of the Disney+ Original Series The Mandalorian (set 20 years before Disney’s sequel trilogy), the carefully-crafted and rigidly-maintained timeline set for Galaxy’s Edge looks likely to loosen up. And suddenly, being a Mandalorian bounty hunter looks like about the most sought-after Star Wars experience Disney Parks could offer. Whaddayaknow!

While these two attractions were part of a version of Star Wars land that hit the cutting room floor, our favorite concepts from the Galaxy's Edge we know are on the next page... and frankly, either of them would still add a whole lot to the land today...