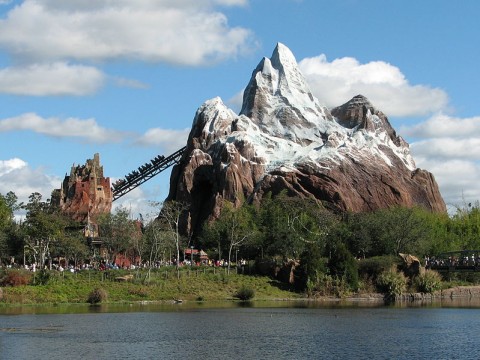 What’s in a name?

Attraction names are funny things at theme parks. They play an important role drawing guests to try new attractions, as well as telling us a bit of what to expect from a ride’s story. However, even at Walt Disney World and Disneyland, sometimes they don’t tell you the full story…

What if attraction names at Disney parks were totally literal--pointing to obscure details about backstories, the magic behind the effects, or what guests actually experience?

It’s been an odd year with plenty of opportunity to dive into heavy subjects— this is not one of those articles. Sometimes, a lighthearted trip to the laughing place is just what’s in order.

Let’s have a little fun together and look at just what popular Disney attractions might be called if we pull back the curtain a little… and enjoy some fun facts about our favorite rides along the way.

Expedition: Everest actually takes place on the Forbidden Mountain, an entirely fictional peak within the Himalayas conceived by Disney Imagineers that happens to have a distant view of Everest (represented as the right-most peak of the ride).

The ride begins in the village of Serka Kong in the (also fictional) kingdom of Anandapur, where some budding entrepreneurs have refurbished a steam train (formerly used by the Royal Anandapur Tea Company) to offer guests a shortcut through the Forbidden Mountain straight to the base of Nepal’s Mount Everest. As with any good ride story, you happen to be the touring party that discovers something has gone terribly wrong—for the mysterious yeti is not a fan of noisy trains on his front porch.

Is the ride’s name misleading? Not really, considering that your goal is to get to Everest—but still, this is an easy one to have some fun with when you know the details.

Avatar: Flight of Passage is one of the single most popular attractions in all of Walt Disney World--possibly only short of Star Wars: Rise of the Resistance. What many people may not realize is this incredible attraction has some common ground with another Disney favorite.

It's basically Soarin’ Over Pandora…

Both Avatar: Flight of Passage and Soarin’ (at both Epcot at Disney’s California Adventure) utilize similar technology to give guests the breathtaking experience of flight: a mixture of a massive concave screen, entrancing scent effects, and a gently swaying ride mechanism. Besides the addition of 3D technology on Flight of Passage, the primary difference is that Soarin’ gives guests the opportunity to ride a massive hang glider, while Avatar: Flight of Passage lets guests experience flight on the back of a banshee.

So, in essence, you could also call this one Soarin’ on a Space-Dragon!

Mission: SPACE gets more flack than it probably deserves—I understand it’s not for everyone, but the way the infamous “Orange Team” version of the ride simulates zero gravity is one of the most incredible experiences at Walt Disney World.

Curiously enough, the ride isn’t actually about a mission to space…

Mission: SPACE is actually a ride about training for a space mission—the ride’s whole story is that you are part of an astronaut crew preparing for a future Mission to Mars. Astronaut training is no joke, and getting a crew ready to head on such a perilous mission means training crews how to deal with tight-enclosed spaces and G-forces.

G-forces are important in theme park rides—they’re the result of sudden shifts in momentum that give you that distinctive feeling of flight or lifting out of your seat. Extreme G-forces do strange things to people like inducing motion sickness, causing temporary blindness, or even causing some people to pass out.

How do you simulate the intense G-forces of a space launch? Well, you have two choices: you either launch guests into the air repeatedly with something similar to NASA’S “vomit comet” aircraft (nope!) or you build a great big centrifuge.

A centrifuge simulate extreme G-Forces by spinning those inside around at stunning speeds—if you hide the outside world and place a screen in front of those inside, you can simulate the sensations of speeding up, slowing down, or even weightlessness.

While this effect is what give Mission: SPACE it’s magical zero gravity effect, the extreme spinning is as hard on many guest as it is on real training astronauts—resulting in some seriously queasy stomachs. This is also why Mission: SPACE is the only ride at Walt Disney World that keeps vomit bags within reach of guests. Code V!

4. Six Feet Under the Sea

20,000 Leagues Under the Sea (formerly known as Submarine Voyage) was one of Magic Kingdom’s most creative attractions (and saddest losses). The ride gave guests the opportunity to embark on a mesmerizing journey into the depths with Captain Nemo on the submarine Nautilus.

20,000 Leagues Under the Sea didn’t rely on screens or simulators, instead utilizing practical effects like bubble screens, waterfalls, and other clever tricks to create the illusion of sending guests to the bottom of the ocean.

In truth, guests never descended lower than about 6-7 feet. The ride’s “submarine” was actually an elaborate boat on a track. While 20,000 Leagues Under the Sea might be no more, guests visiting Disneyland can still enjoy it’s cousin in the form of the Finding Nemo: Submarine Voyage. That’s an ironic name for you…

5. Indiana Jones and the Temple of the Fool Tourists

The story behind the Indiana Jones Adventure isn’t so much about a typical Indy expedition. Indy did find the temple, but that’s not the adventure you’re partaking on.

In this case, the infamous archaeologist ends up in peril thanks to aloof tourists who take the opportunity to explore the Temple of the Forbidden Eye in hopes of gaining riches, eternal youth, or visions of the future. Inquisitive explorers only have to follow one rule: don’t look into the eyes of the idol. What could possibly go wrong?

You had one job, folks…

Ha ha Jett, you are such a treasure. LOVED this article. My name for Summit Plummet would be "Zero to Wedgie in 2.6 Seconds." Also, Mr. Toad's Wild Ride, or as many remember it, "Mr. Toad's One-Way Ticket To Hell."

My sister is going to experience Tom Sawyer Island for the first time later this year (she's in her late thirties) and I can't wait to send her your commentary on that nightmare-filled corner of the otherwise happiest place on Earth.