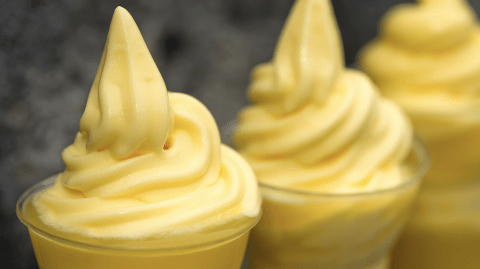 Pretzels. Churros. Corndogs. Turkey legs. The pantheon of beloved Disney Parks snacks is a force to be reckoned with... a who's-who of treasured theme park delicacies the likes of which few can rival. Snacking is practically an artform at Disneyland and Walt Disney World, with guests galavanting from land-to-land collecting ice cream bars, pretzels, cake pops, and Rice Krispies all fashioned into the shape of the Big Cheese himself. Yet of all the delicacies of Disney Parks, one reigns supreme: the Dole Whip.

Despite seemingly being as integral to Disney Parks' stories as castles, pirates, or railroads, the fact is that the Dole Whip didn't debut when Disneyland opened in 1955, or even later that decade when Hawaii's 1959 admission to the United States caused a tropical stir across the country.

Yep, the Tiki Craze spread throughout the United States bringing rattan funiture, floral leis, tiki torches, and the music of the tropics to Disneyland (and the mainland at large), incarnate in the Modern Marvel: The Enchanted Tiki Room and its complementary Tahitian Terrace dinner lanai... but still the Dole Whip did not appear.

Five years after the Tiki Room's debut, Disneyland did open a complementary Tiki Juice Bar... but only serving tropical juices and pineapple spears. It wasn't even until 1976 that the Dole Food Company – a Hawaiian produce company founded in 1851 – officially became the sponsor of the Enchanted Tiki Room attraction (replacing United Air, which was initially underwritten the show as an advertisement for its flightplans to Hawaii). Had the Dole Whip arrived? Still no.

In fact, according to the impeccable research work of the extraordinary Disney Food Blog, the Dole Whip officially debuted in Disneyland and Walt Disney World in 1986. Deliciously frosted, sweet, sour, punchy, vibrant, and swirled, the dairy-free Dole Whip is a legend in its own right. Even though you'll find unofficial (and Dole-approved) alternatives at theme parks around the country, the Dole Whip was designed for Disney Parks... It's the perfect snack to combat a sweltering Florida day; to enjoy in Disneyland's Tropical Hideaway along the Jungle Cruise's waters; to slurp while "singing like the birdies sing" inside one of the few remaining Walt Disney classics.

Offered solo or afloat on a sea of pineapple juice (and, if you're in the right place, rum); accentuated with swirled ribbons of raspberry, mango, or lemon; topped with chamoy, chili-lime seasoning, dried hibiscus, or mango; served alongside banana lumpia, bao buns, or PB&J mochi...

The iconic, vegan, gluten-free, pineapple-flavored soft serve is in a league of its own. Even if the more recent introductions of lime-flavored Dole Whips (with Peter Pan embellishments), non-dairy lemon and white chocolate frozen swirls (in Pixar Pier), and the Magic Kingdom-preferred, orange-tinged Citrus Swirl have grabbed headlines, there's just no denying: when it comes to Disney Parks classics, the Dole Whip is the tropical treat to beat.

We want to know your experience with the Dole Whip! Do you remember your very first taste of this fandom favorite? Has the Dole Whip grown on you, or was it love at first bite? How do you accessorize your Dole Whip – flavor swirls? Toppings? Pineapple juice? Rum? What makes this in-park snack such a delicacy among Disney Parks fans? Let us know in the comments below!