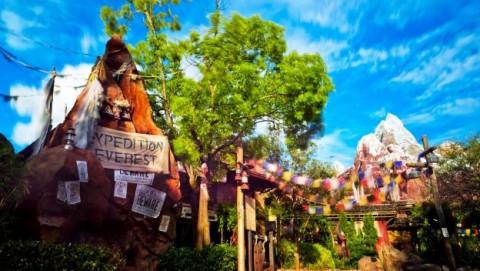 “The year is 2021. The IP Wars have been waging for decades…” What might sound like the beginning of a post-apocalyptic young adult novel is all too real for fans of Disneyland, Walt Disney World, and Universal Orlando. As their respective parent companies race to create, borrow, or outright buy the hottest brands they can get their hands on, Disney and Comcast’s theme parks have become a pop culture battleground.

Disney CEO Bob Chapek famously responded to fans’ frustrations about IP overload by commenting “if our competitors had our catalogue, they’d be doing the same thing.” And he’s right! With nearly $100 billion in acquisitions over the last two decades (and many unexpected IPs en route to Disney+ and Disney Parks), wouldn’t it be downright irresponsible for Disney to waste time with original mythologies, original worlds, or original characters? Wouldn't it be a disservice to shareholders to build Mystic Manor instead of Ariel's Undersea Adventure?

Which brings us back to 2021… Today, we’ll look back in the archives to discover… What was the most recent IP-free headlining ride at U.S. Disney and Universal Parks? How many years has it been since each debuted a truly original major attraction without a blockbuster movie, character, or brand as its reason for being? You might be surprised...

It’s been a very, very long time since Disneyland Park hosted a major, IP-free attraction. At least in part, that’s because the park suffered a relative drought of major attractions, period, between 1995’s Modern Marvel: Indiana Jones Adventure and 2018’s STAR WARS: Galaxy’s Edge. (Attention was mostly focused on building then fixing its neighbor, California Adventure). Though major re-imaginings (Star Tours: The Adventures Continue, Haunted Mansion Holiday, and Finding Nemo Submarine Voyage) and C-Ticket rides (The Many Adventures of Winnie the Pooh and Buzz Lightyear Astro Blasters) came online in the 2000s, none were IP-free.

So technically, it’s probably fair to say that Disneyland Park’s most recent IP-free anchor attraction was…

Gulp… the Rocket Rods. This doomed Tomorrowland thrill ride replaced the beloved classic and Lost Legend: The PeopleMover with “high speed” cabs that tackled the same convoluted course in a fraction of the time. “Earning” their own in-depth Declassified Disaster: Rocket Rods entry, the ride was an infamous flop, with frazzled operations that totally failed after just a few years. To this day, its abandoned aerial highways still criss-cross the land.

The Rocket Rods are long gone… So what’s the last major IP-free addition to the park before Rocket Rods? Ultimately, we’d probably need to bypass all of the ‘90s and ‘80s (since they were defined by Michael Eisner’s “Ride the Movies” period) and end up on 1979’s Big Thunder Mountain Railroad - more than 40 years ago!

Major new additions tend to be fairly rare at Magic Kingdom, too, given that Walt Disney World’s first park is far more built out than Epcot, Hollywood Studios, or Animal Kingdom. Looking back through the park’s last twenty years is to see additions based on TRON, Snow White, The Little Mermaid, Winnie the Pooh, Lilo & Stitch, and Aladdin - some of which were intentional character-fueled overlays to otherwise original rides.

To that end, it’s not difficult to track the story back to Magic Kingdom’s last wholly-IP-free major attraction...

1995’s Lost Legend: Alien Encounter remains one of the most infamous attractions in Imagineering's portfolio. The legend of “Disney’s scariest attraction ever” is still whispered across message boards and social media. And it wasn’t alone.

Alien Encounter was just one part of the park’s darkly sci-fi-centered New Tomorrowland. This gleaming neon cityscape was an early experiment in Imagineering’s “original mythologies,” an entire IP-free land combining Alien Encounter, the PeopleMover, Space Mountain, the Lost Legend: Timekeeper, and even the land’s restaurants into one overarching story… without a single Pixar character in sight! Though short-lived, that original vision of the land remains a legend among Millennials and was unlike anything we’re likely to see from Disney anytime soon.

When EPCOT Center opened in 1982, part of its ambitiously different way of doing things was to intentionally omit characters altogether. EPCOT was designed to be free of Disney characters and instead focus on the realities of technology, industry, culture, and innovation - a “permanent World’s Fair” exploring humanity’s story rather than Mickey’s. In fact, the only “characters” seen in the park were the characters invented for it - namely, the hosts of the Lost Legend: Journey into Imagination!

Though fans may not have been happy with us, we published a controversial editorial years ago suggesting that it was time to bring characters into EPCOT; that at some point, Disney’s piecemeal infusion of IP was doing more harm than good, and that the big picture reimagining the park needed simply wasn’t going to be done without characters in tow. It turns out we were right. By the end of the decade, just about every pavilion will have an attraction or connection featuring a “host” character from Disney, Pixar, or Marvel.

But because that change is so new, it’s not too hard to trace back to the last character-free anchor in the park...

Disney’s “studio”-themed theme park has a heck of a claim to fame: it has literally zero of its Opening Day attractions left! But as they say, that’s showbusiness for ya! Though often considered an underbuilt, half-day park, Disney has stocked Hollywood Studios with an impressive ratio of certifiable E-Tickets. But as you might expect from a park that celebrates the movies, precious few rides have been legitimately “IP-free.”

In terms of noteworthy, permanent attractions, 1999’s “Sounds Dangerous Starring Drew Carey” capitalized on the ABC star’s then-popular sitcom, but didn’t technically connect to it. That same year’s Rock ‘n’ Roller Coaster would be IP-free were it not for its reliance on Aerosmith. So what's the most recent IP-free headliner?

Yep, in the tiny Venn diagram overlap of “Anchor Attractions” and “IP-Free” at Hollywood Studios, there’s really just one thing: the Lights, Motors, Action! Extreme Stunt Show that was “gifted” to Disney World from Disneyland Paris… to celebrate the original Disneyland’s 50th birthday, 16 years ago.

I don’t know why I waste my time reading this. IP had been a major part of Disney Parks since July 17, 1955. It’s funny how most of the “IP-free rides” mentioned were failures. THAT’S why there are so few “original rides” in the parks. Disney is all about synergy. Walt based his attraction on IP’s. What’s not to understand?