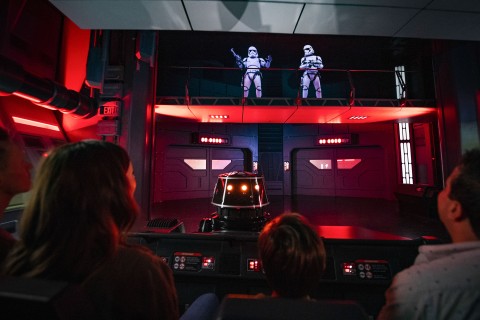 In our first entry into the "How an Idea Becomes a Ride" series, we ventured into what goes into making your favorite stomach-dropping, scream-inducing roller coasters, and today, we'll be digging into dark rides.

Today’s topic does beg the question: what is a dark ride, anyway? I can almost guarantee that if you’ve been to a theme park, you’ve been on a dark ride.

Dark rides are indoor attractions featuring a mix of screens, practical effects, and some sort of moving vehicle. They are heavily-themed and story-based attractions, varying in intensity and duration, and are broken up into a few notable sub-categories: motion simulators, track-based dark rides, shooting dark rides, and the ever-growing “miscellaneous” category.

Dark rides are often totally immersive and vividly-themed, making you part of the story and conflict. A park’s creative team must join forces and collaborate with manufacturers to make their dreams a reality.

So who comes up with the aforementioned stories that drive dark rides? Many parks, especially intellectual property-driven parks such as Disney and Universal, have creative teams working behind the scenes to develop new attractions. Their job is to pull you into the world of the attraction and to make you part of the story. You’ll often play a role—a trainee or a citizen in danger—placing you in the center of the action.

But creative teams, first and foremost, are storytellers. Not engineers. Their job is to promote and develop their intellectual properties (be it Harry Potter, Star Wars, or even the Bourne universe) through cohesive and immersive stories their guests can play a role in. So in many cases, third-party help must be brought in.

(For behemoth parks like Disney, the Imagineering team is large enough to support a staff of ride engineers, maintaining that many of their rides, including the acclaimed Rise of the Resistance dark ride, are made completely in-house. This is sometimes, but not always, the case.)

This much-needed collaboration between parks and manufacturers breeds innovation that can not always be found by strictly in-house teams. Escape from Gringotts at Universal Studios Orlando, for example, is a dark ride (that can make an argument as a family roller coaster) that was bred through collaboration. Universal Creative joined forces with Intamin Amusement Rides to bring this journey into Gringotts Wizarding Bank to fruition. Intamin is a major player in modern theme park rides, responsible for record-breaking coasters like Millennium Force, the world’s first Giga-coaster, and Kingda-Ka, the world’s tallest coaster. Bringing Intamin in to help execute Universal Creative’s vision for this attraction not only made for one of the best rides in the park, but laid a foundation for a partnership which would later lead to prestige coasters such as Hagrid’s Magical Creatures Motorbike Adventure and the recently-announced VelociCoaster. Collaboration between parks and manufacturers is not only necessary, but highly beneficial to the innovation and growth of theme parks to come.

In our previous piece in this series on roller coasters, we explored how to find “the gap” in your local park’s roller coaster lineup in order to predict what may come next. Though dark rides are more varying in ride system and theme, making it more difficult to spot specific gaps and predict future attractions, you can still find gaps in your hometown park by knowing the main subcategories of these rides.

You Love Them or Hate Them: Motion Simulators

Motion simulators are perhaps the first thing one may think of when they think of dark rides. This includes your iconic Star Tours, your infamous The Simpsons Ride, your innovative Soarin. These are entirely screen-based attractions, meaning they rely on the use of screens and (frequently) 3D glasses to tell the story of the ride. Typically there will be a ride vehicle that features movement, but is not on a track (we’ll get to those later).

These are the rides that certain crowds might despise—for those with motion sickness they may not be the move—but are also some of the original dark rides.

One would think that as parks have grown and dark rides have evolved, these rides would become obsolete, but in reality, the opposite is true. Though larger parks are opting for new options in the arena of dark rides, motion simulators are more cost-friendly and malleable. Even after motion simulators are made, they can easily be improved upon and updated with the culture. Even Universal has invested somewhat recently in a motion simulator, with the addition of Race Through New York Starring Jimmy Fallon in 2017. This ride is a textbook example of a motion simulator, and has kept guests smiling for the past three years with its virtual queue, cool air-conditioned pre-show area, and light-hearted storytelling.

Loved this Peyton......each time I have the privilege to hear your voice- whether it is in your "pen" or voice box I am so grateful to have had you in my class. Proud teacher :)