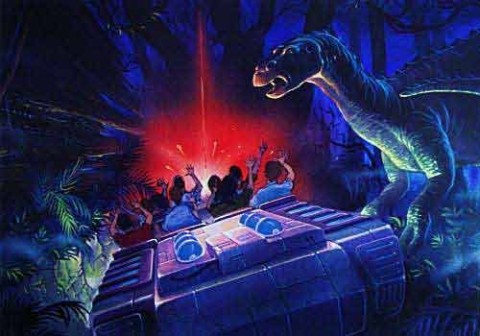 Whether you've rocketed through the boundless cosmos on Space Mountain, been an adventurer uncovering the mysteries of the Temple of the Forbidden Eye, trekked through the lantern-lit forests of Grizzly Peak, or explored the snow-capped village of Hogsmeade, you've been a part of one of the most essential cornerstones of themed entertainment design: story.

When you spend a day at a Disney or Universal Park, you truly do "leave today" and step into new worlds, new adventures... and new roles. From archaeologists to time-travelers, students to tourists, reporters to escape artists, a day at the parks is truly a day on-stage, trying on an assortment of once-in-a-lifetime roles.

So today, we thought we'd try to group those "roles" you'll find across Disney and Universal Parks into six overarching categories – six "motivations" for on-stage stars of rides, lands, and parks to play off of. Our list is far from exhaustive, and it's important to note that these "roles" not only overlap, but can evolve from queue to ride! Still, it leave us wondering: Would be a park be weaker or stronger if all of its lands, rides, and experiences kept guests in a single role? Which of these is the most fun to inhabit? We'll leave that to you to decide! Share your thoughts in the comments below!

How you know if you're "the observer": Things happen around you, not to you.

Let's be clear: for a lot of Disney Parks' history – and many Disney classics – your "role" is just to enjoy the ride.

For example, think of the ride often considered Walt Disney's own magnum opus and heralded by many as the best classic dark ride on Earth: Disneyland's PIRATES OF THE CARIBBEAN. When guests board their own boats to sail through the firefly-lit swamps of New Orleans, crash down waterfalls into ghostly caverns, and float through a Caribbean town under siege, at no point are guests by design meant to feel that the events of the ride are happening to them. Quite the contrary, Walt remarked on how drifting through the town ought to feel like being a cocktail party; picking up bits and pieces of conversations, but never lingering too long. In that sense, guests were clearly observers, merely meant to take it all in.

It's the same with the HAUNTED MANSION, when you think about it. Though you might imagine yourself as a "tourist" visiting the old manor on the edge of town – a role potentially exemplified by the presence of the Ghost Host speaking directly to you – it's certainly arguable that the events of the ride are merely "spooky sights and sounds" happening around you, not to you. Sure, guests inadvertantly circle up for a seance, "fall" out of the attic, and end up with a hitch-hiking ghost climbing aboard... but altogether, the ride is largely a passive one in the very best way.

As the Haunted Mansion shows, Disney's patented Omnimover ride system of continuously-moving clamshells is an ingenious ride system for ushering thousands of guests an hour through looping vignettes where they can sit back and observe a world unfolding around them. Unfortunately, that ended up being a poor choice of ride vehicle (and thus, role) for the two Little Mermaid dark rides at Disney California Adventure and Magic Kingdom.

Unlike the rest of Disney's Fantasyland-esque dark rides where guests physically or emotionally inhabit characters' roles, the  use of the Omnimover on THE LITTLE MERMAID ~ ARIEL'S UNDERSEA ADVENTURE ensures that guests never really feel like part of the story. Instead, they're passively touring through (sometimes iffy and disordered) recreations of scenes from the movie. The Little Mermaid's is a world guests wanted to inhabit, and instead its ride uses the Observer role, which is perhaps why fans tend to think that the ride is good, but not great.

In other words, this "role" (and many others) are clearly tied closely to ride systems. So as we press onward, think about the role that the rise of the simulator and the "Ride the Movies" era had not just on guest roles, but on the ride systems that are sometimes inextricably connected...

How you know if you're "the trainee": The time is now and the place is here.

Placing guests in the role of a "trainee" can be a great way to bring guests into a world one step at a time... As a trainee, after all, you're not expected to know much, so it's okay to have expository pre-shows explaining the conditions of your "recruitment" and to break the fourth wall to explain safety procedures and explain away ride vehicles. Being a "trainee" can also be a great role if it ends up layered within a larger story, typically by having guests "recruited" for one thing that quickly and unexpectedly evolves into another.

For example, guests queuing for the DINOSAUR are led to believe that they're merely touring the prestigious Dino Institute and its old marble museum halls. Even once recruited to test out the Institute's cutting edge CTX Time Rover by traveling to the age of the dinosaurs, their "trainee" mission is commandeered by a rogue employee with a secret mission of his own. Mercifully, the Dino Institute is left behind for the steaming, hissing jungles of the Cretaceous.

Likewise, guests take on the trainee role in Universal Orlando's MEN IN BLACK: ALIEN ATTACK when the World's Fair exhibition they're visiting turns out to be a cover for the secret alien regulating agency. Even once recruited to test their skills in an MIB training room of flat cutout targets, an actual intergalactic emergency forces riders out of the training center and into the mean streets of New York, where wet-behind-the-ears trainees have to become intergalactic heroes. Cheesy? Yes. A great example of using the trainee role to its strengths? Also yes.

The "trainee" role is also at the heart of the Avengers Campus at Disney California Adventure, which quite literally rests on the idea that guests are being tested and recruited at a C.A.M.P.U.S. (that's Centralized Assembly Mobilized to Prepare, United, and Safeguard) established to train the next generation of heroes. Frankly, being empowered to test new STARK tech and become a hero yourself isn't just a smart way to sell in-universe souvenirs; it's also a very clever and natural way to use the "trainee" role! That'll make WEB-SLINGERS: A SPIDER-MAN ADVENTURE a cool, low-key, low-stakes "trainee" experiment for the whole family.

The "trainee" is also a somewhat problematic role in that it tends to intersects with a common trope in our telltale signs of a "bad" ride story – taking place in a training center, office, or institute. The premise typically revolves around guests stepping into an attraction to find that they've been recruited to tour, train, or test something. Narratively, it's often a creative cop-out that allows Imagineers to fall back on the unimaginative assurance that you're in a warehouse, in a theme park, so no need to suspend your disbelief or use your imagination.

Our go-to examples of this poor use of the trainee role are EPCOT's JOURNEY INTO YOUR IMAGINATION and MISSION: SPACE, both of which cast guests as "trainees" and continuously, constantly reassure them that they're not really going anywhere; it's all a simple training process, in a building, in a theme park. Considering both took the place of epic, imaginative, and almost-abstract masterpieces (the Lost Legends: Journey Into Imagination and Horizons, respectively) that had the guts to just let people dream, it's clear the "trainee" role can be a tough one to get right.