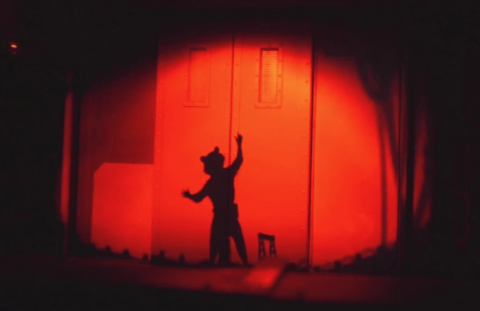 The COVID-19 pandemic has changed our world in incalculable ways as it wreaks havoc and devestation on populations and industries across the globe. But leave it to Imagineering fans to look toward the "great, big, beautiful tomorrow" shining at the end of it, channeling this "world of hopes and world of fears" into creative projects meant to add a little light to a bleak situation.

While you may not have showbuildings or multi-million dollar ride systems, you can recreate the magic of Disney's greatest rides and attractions at home... Yep, around the globe, families are coming together (while staying inside!) to recreate their favorite Disney Parks attractions using household supplies, memories, blacklights, and a sprinkling of homemade pixie dust.

Given the choice, most of us would probably opt for a day at a Disney Park over a day on the couch... But these creative homemade "rides" prove that just because you're stuck at home – be it a snow day, a holiday, or, y'know, a global pandemic sweeping the globe – there will always be ways to bring the magic of the happiest places on Earth right along with you. Plus, don't forget to tag us in the best homemade Disney rides you've seen around social media!

If you thought you couldn't soar across London from the comfort of your own home, boy do Nicole Skidmore and family prove you wrong! Dip down over nighttime London, glide through a Mermaid Lagoon, zoom through a battle between Peter and Hook, and pass by one of the best Tiger Lily impersonators we've seen yet! This wonderful recreation of the opening day dark ride found at almost every Disneyland-style park is proof that a little collaboration and creativity can create one of the best rides of all time, right at home!

2. Soarin' Around the World

When the Lost Legend: Soarin' Over California changed its flightplan to a tour Around the World, it traded the beaches, mountains, forests, and cities of the Golden State for the snow-capped Matterhorn, the bays of Sydney, humming African savannahs, the iconic Taj Mahal, the crystal waters of Polynesia, the lights of the Eiffel Tower, and Tinker Bell's flight through the firework-lit skies of Epcot. Recreated at home? Impossible! Except, of course, that Eat Breathe Disney on YouTube found a way! It's an international tour without leaving the house!

The "World Famous" Jungle Cruise has been a favorite since Disneyland's opening in 1955, and has since been exported in various forms to Orlando, Tokyo, Hong Kong, and... the residential pool of the Disney-loving family behind the Couple Meets World Adventures channel. The must-see tour along the world's most exotic waterways includes some favorite skipper jokes and some impressive "Audio-Animatronics." No, really.

"When the crypt doors creak and the tombstones quake..." There's a reason the Haunted Mansion is one of the most iconic and beloved Disney attractions ever... And the at-home remake by Angela Bretthorst Gusky on YouTube is one of many recreations of the classic attraction. How do you make a ballroom of ghosts dance? Portraits stretch? A candelabra float? You've got to see it to believe it!

Sure, you can't ride Alien Encounter today... but you can't ride any of the other attractions on this list today either, can you? If you've only heard rumors of this long-shuttered horror attraction at Magic Kingdom, or barely remember Disney's "scariest attraction ever," make the jump to our Lost Legends: ExtraTERRORestrial Alien Encounter feature to uncover the full story of Imagineering's edgy sci-fi thriller attraction. The experience was a gut-wrenching, multi-sensory show that thrilled (and traumatized) a generation of '90s kids... let's hope the Remain Seated with Chris Nebergall channel has the same lasting impact.

We've got three more must-see homemade magic rides on the last page... and some must-see ways Cast Members are keeping their Disney skills fine-tuned during closure!

I like this one from the Carousel of Progress. https://youtu.be/hHQ-jpGsja0

Loved the Jungle Cruise!!! Felt like I was down there at Disneyland sitting in a boat, floating on the water, listening to the guide!! :)